Indian sports organisers were eager to send an independent Indian team to the Games. 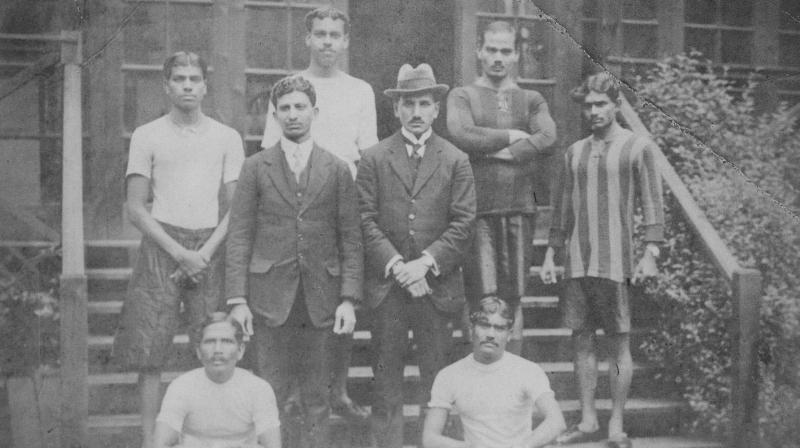 Very few of us would be aware that India made its debut in Olympics in August 1920 at the Antwerp, Belgium Games. This August marks the beginning of the Centenary Year celebrations of this unique event.

The Olympic Historians have a decisive take on this. They say, “Norman Pritchard was neither Indian nor did he represent India at the Paris Games!” And yes, he sure cannot be called Indian at all. Both his parents were British, working and staying in Kolkata along with Norman.

Around 1900, Norman happened to be in England participating in Athletic Games there. He came to know about Paris Olympics and showed up there. As the norms for entry were not very stringent, he got an easy entry. He mentioned his Kolkata address in the entry form hence the organisers called him an Indian entrant, that’s all. May be because of the two silvers he won; the Indian institutes want to own him.

Actually, just after the first World War, Olympic Organisers determined to hold the games in 1920 and awarded them to Antwerp in Belgium, to be held in August and September. Soon the news arrived in India. Indian sports organisers were eager to send an independent Indian team to the Games.

They approached industrialist Sir Dorabji Tata, who upheld it instantly and requested the governor of Bombay Presidency Sir George Lloyd to help in the matter. Sir Lloyd was very instrumental in getting the permissions from London and the ball started rolling. The local organisers came together and on 8th November, 1919 the Indian Olympic Association was formed at the Deccan Gymkhana in Pune. Sir Dorabji Tata was elected its first president.

They had very little time at hand for the preparations. The first task was to select athletes of calibre to participate. They could barely manage to hold the selection tournaments in 1920 on April 1st to 8th in Mumbai and on 23rd and 24th in Pune. Athletes were invited from both the British administrated India and from the independent states.

The final selection was Randhir (Or Dinkar?) Shinde of Kolhapur for bantamweight freestyle wrestling, Kumar Navale of Mumbai (then Bombay) for featherweight freestyle wrestling, Purna Chandra Bannerjee of Kolkata (then Calcutta) for short races, Sadashiv Datar of Satara and H. D. Kaikadi of Hubali for marathon and P. D. Chaugule of Belgavi (then Belgaum) for 10,000 metres run and marathon.

All of them were known in their respective fields, but Chaugule was truly special.

That was because from an early age he used to participate in running tournaments ranging from one mile to cross-country and Marathon and had won several of them at various levels. In 1919 at 17 years of age, he had won 27 miles cross-country with an unofficial world record.

Many philanthropists including Sir Tata, Lokamanya Tilak and Seth Walchand Hirachand donated large sums for the expenses of the players. Sir Lloyd arranged for their travel & training in England prior to the Olympics as well as for their stay in Antwerp at the British Military Rest Camp. Sohrab Bhoot was appointed as the manager and Dr. Ali Azhar Fyzee as the Medical Officer and Advisor of the team.

The contingent sailed to London from Bombay Port on 5th June, 1920 in British RMS Mantua. For most, this was their first long sea voyage. They faced problems of food. Not only for the vegetarians like Chaugule and Datar but for the non-vegetarians too there were very few choices of food on the ship. There was hardly any possibility of doing their regular work-outs and practice. Some suffered sea-sickness too. The ship reached London on 22nd June.

Even though fatigued, their training began immediately under the British coach H. Parry. As per the Olympic norms, the runners had to practice wearing shoes and that was a big hindrance. Most Indian runners were accustomed to run barefoot.

But there was no option, so they practiced with shoes. That gave them shoe bites. Still they continued with bandages and participated in local tournaments as well.

That was a great revelation to all. Indians excelled in almost every event. Especially, P.D.Chaugule caught everyone’s eye with his lightening speed. But he had to face some racism there of getting beaten up and Soda water bottles being thrown at while competing. He somehow managed to sustain that.

The performance of Indians in England was alarming to the world. American news-papers had bold headlines such as ‘Hindoo Looms as Dark horse at Olympic Marathon, our athletes should keep an eye on Chaugule in Antwerp’.

The team arrived in Antwerp on August 10. The Olympics were inaugurated on August 14, by the Belgian King Albert in a rain-shadowed climate. Indian players proudly walked in the March Past under the British India flag.

Events of each player gradually started. But may be because of long travel, food issues, climate changes and pressure of the big tournament, Bannerjee failed in the qualifying heats of 100 and 400 metres and Navale & Shinde bowed out of their initial bouts.

Chaugule entered the qualifying heat of 10,000 and was running comfortably, when around the third kilometre, a spectator tried to shoot him with a pistol but missed and Chaugule had to drop out. He was dejected but the marathon was just after three days. His friends managed to prepare him for the grand event.

The day of marathon, August 22, 1920, dawned. Scheduled at 4.15 pm, it was to begin and finish at Beerschot stadium. The distance this time was 42.750 kms, more by 545 metres that usual. Wearing shoes, Chaugule and Datar joined the group of 48 acclaimed runners. Kaikadi didn’t show up. The race began but Datar dropped out at an early stage.

Chaugule continued with his famous rhythm undeterred as he always was. Till about 15 kilometres he was doing well. By then the route had turned back to the stadium. He had all the stamina in the world with him and was sure to make it first there.

Suddenly it started drizzling. He had to slow down. But the water entered his shoes and through the bandages to the wounds of bites. That was the final blow of ill fate. The pains increased instantly and he slowed down considerably. Other runners started overtaking him. He somehow managed to keep it going and entered the stadium.

He was 19th to cross the finish line but he became the first Indian to complete an Olympic marathon. He was awarded a diploma of merit along with a few others, for finishing the Marathon within 25 per cent of the winning time.