If the IOC ratifies the qualification changes suggested by the world weighlifting body, then both will go to Tokyo 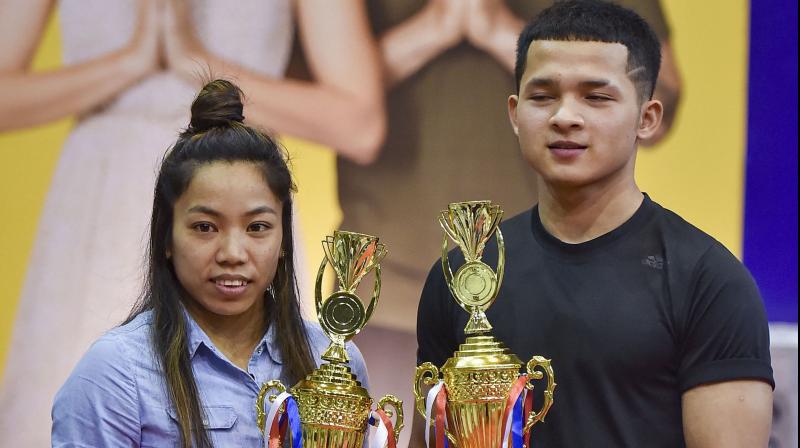 Mirabai Chanu of RSPB and Jeremy Lalrinnunga of Mizoram with their trophies after they were adjudged as ‘Best Lifters’ among men and women respectively, in Kolkata, last month. PTI Photo

New Delhi: Weightlifting's Olympic qualifying schedule has gone haywire like everything else due to the Covid-19 pandemic, but India's Mirabai Chanu is a sure-shot for the Tokyo Games, if they are held, while young Jeremy Lalrinnunga is also set to make the cut for the mega sporting spectacle.

Former world champion Chanu currently occupies third place in the women's 49kg world rankings following the cancellation of the Asian Championships, the last Olympics qualifying event of the continent due to the coronavirus outbreak.

She has taken part in five out of the six events mandated in the new qualification rules.

In a meeting of the Executive Board of the International Weightlifting Federation held on March 17-18 via video conference, the world  body has made some recommendations to the International Olympic Association (IOC) regarding the Olympic qualifying events.

One of the key recommendations, sources said, was to close the qualification process as all the five continental championships were  cancelled due to the COVID-19 pandemic.

This would mean the Olympics qualification slots will be decided based on the current world rankings. The IOC will, however, take a final call on the recommendations of the International Weightlifting Federation.

"If that should come about, then Mirabai is certain to the qualify for the Olympics. The top eight from the world rankings after the end of the qualification period automatically qualify," Indian Weightlifting Federation Secretary General Sahdev Yadav told PTI.

Under the new rules, to qualify for the Tokyo Olympics, a weightlifter must compete in at least one event in each of the three periods of six months (spread over November 2018 to April 2020), at least six events overall and in at least one gold and silver-level event.

As for 17-year-old Jeremey (men's 67kg), who won a gold in 62kg in the 2018 Youth Olympic Games, Yadav said, "In the Olympics,  there will be 14 competitors in each weight category, men and women. Besides the top eight from the world rankings, the top ranker from each of the five continents will also qualify. Jeremy is at the top of Asian rankings and if the international federation's  recommendations are accepted by the IOC, he will also qualify."

Jeremy is at the top of Asian rankings with 3119 Robi points, far ahead of second-placed Mohammed Almazyadi Nawaf (2672) from Saudi Arabia. He is set for his maiden Olympics.