Losing the kilos, gaining the grit

The 34-year-old rookie runner is eyeing a podium finish at the upcoming marathon. 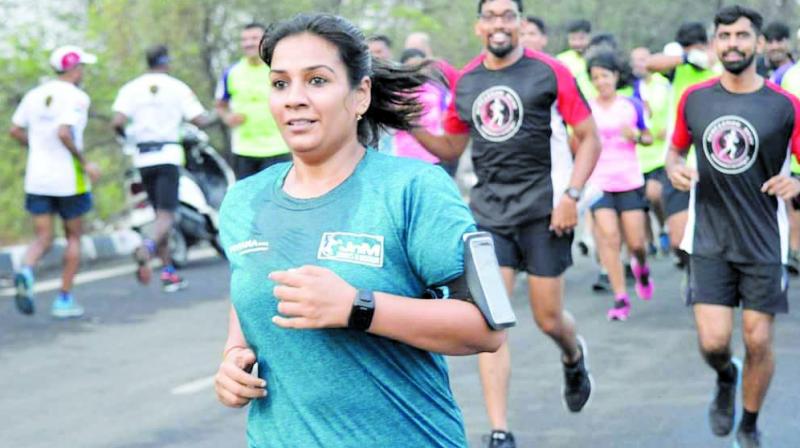 In 2013, she had quit her job. It was a sabbatical like the ones in the movies where one thinks that they will have time for themselves and do the things they missed out while they were on the job. But it did not perfectly work out for Nisha Gurbani.

While she was on the break, her habits were only getting worse. Her sleep cycle, her eating habits and her timetable changed only for the worse. In a couple of years she gained bountiful kilos of weight. It reached till a point when the doctors pointed out that it will trim down her years. “I was not able to walk,” she recalls. “The doctors told me I will be bed ridden for the rest of my life.”

The time off from her job, at an advertising company, where she was working for over a decade did not bear the right fruits. Cut to September 2016, after her doctor’s appointment, Nisha took her health sternly.

The goal was to shred the kilos; and then began daily painstaking sprees at the gym. Her eyes were set at the Mrs India Homemakers last year in November. Along with her work out routine, Nisha picked up running as a habit. When she entered the competition, she had lost 34 kilos and had gained a knack for running.

She ended up being the fourth runner-up and found a new obsession in running. The 34-year old took part in her first marathon in December last year. It was the Pinkathon where she ran in the 10 kilometres category.

“I found a passion. The Pinkathon was such a good experience. I started running everyday and running in a marathon felt like it was something I wanted to do every day. I joined the Joint N’ Motion running group to keep the running activity up,” she says.

In the last 10 months, Nisha has participated in five marathons covering over 120 kilometres combined. Her runs include Satara Hill Half Marathon which is considered to be one of the toughest challenges because of the track which is on undulating landscapes of the hill station. She finished the 21km track with a timing of 2:55:37 which is decent for a newcomer. She also jogged 51kms in 8 hours at the Mumbai Ultra last month.

Nisha insists that she wants to compete now that she is getting a hang of marathons. “My next goal is to get a podium finish in the upcoming races that I take part in. I am also greedy to lose weight and get in my best shape,” she says.

Nisha will feature in the IDBI Federal Half Marathon on September 30 and don’t be surprised if you see her in the front line of runners.