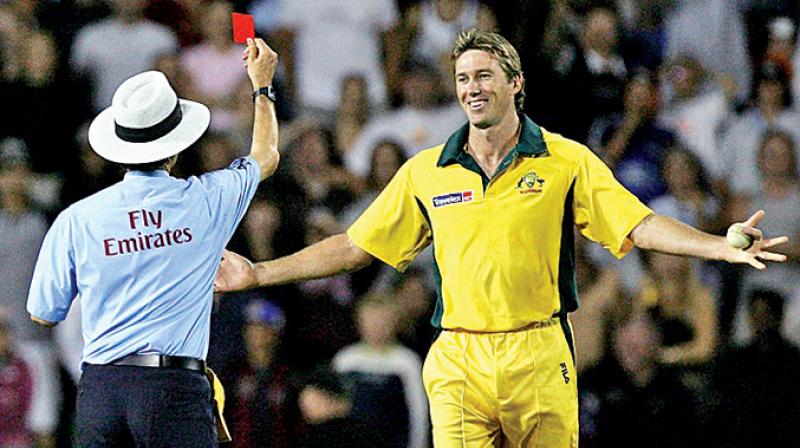 Umpire Billy Bowden shows a red card to Glenn McGrath for a mock underarm delivery to Kyle Mills during a T20 match between New Zealand and Australia in 2005. (Photo: Youtube.com)

Taking a cue from football, the world of cricket too is set to introduce a red card penalty system in the popular sport. The Marylebone Cricket Club has recommended that umpires have the power to send off players in cases of threats to one of the umpires, physical assault on a player, official or spectator. The idea is to curb outbursts of violent incidents on the amateur levels and club crickets, but will also apply to international cricket, next year. We speak to sports personalities and try to gauge if bringing players of the gentleman’s sport under the gambit of penalties and red cards are a good idea. We also ask them if there are other sports that can make use of the warning and sending off principle, widely embraced by football.

‘Will curb behavioural issues’
We had discussed this on our transcontinental radio show called Stumped, a BBC production, some weeks ago. I was of the opinion that this would  be a logical step forward in providing umpires some additional, specific authority. It’s one thing to expect players to know the invisible lines of conduct, but we know that there are regular transgressions. On field player spats and disrespectful behaviour towards umpires at the highest level has now spread to every level of the game. The card system, once it is detailed, will help curb these behavioural issues. Hopefully this bat and ball game will become cricket again.
Charu Sharma, sports commentator, and quizmaster

According to me, violations take place at the lowest level in cricket and not at the state, district or national levels. I personally think that implementing such a rule will be of no use.
Ayaz Memon, sports writer and journalist

‘Would keep players under check’
Cricket has changed over the years. It used to be a gentlemen’s game. But sometimes, in the heat of the moment, players do react violently. This move will definitely curb outburst of aggressive emotions. I think when the matches are so intense, the players tend to loose their cool, which is natural. However, there are times when players over-step the line. For those situations, this is an apt move, because it would keep players under check and help avoid fights.
Mithali Raj, Indian cricketer

‘Sledging can cross all lines of civility’
Yes , this is a welcome idea. The gentlemen who frayed the rules and regulations in the yesteryears did not think about the high pressure in present-day games, and the way ethics have flown out of the window. It’s do or perish, as a single failure can doom a career and finish a captain or coach. Mental disintegration or sledging can descend to verbal abuse, crossing the lines of civility, which in certain instances can be a civil case. No batsman walks, fielders make false claims and when an inch is given a mile is taken. So red cards are welcome.
Biju George, former India under-19 fielding coach

‘I don’t think Red Card system is necessary’
It seems like cricket is getting more colourful — white ball, red ball, then pink ball and now again red card. When common people are still not completely aware about DRS system, I don’t think the red card system is necessary. Apart from this, cricket is not a violence-prone sport like football and rugby — so I don’t think there would even be a possibility of issuing the red card in cricket often. But, if the idea is to maintain the right conduct, I would say some measures can be taken to curb unnecessary aggression shown by bowlers on a few occasions. If you see, a batsman who hits a six, always remains calm. It’s only the bowlers who get excited and sometimes make wrong gestures, after getting a wicket.

My question is — when umpires themselves make mistakes, what card do you show them. Over the years, many decisions have gone on to make or break several cricket careers.
Bosskey, cricket commentator, and  TV host