Serena had the support of the great champion, Billie Jean King, 75, who was in the stands. 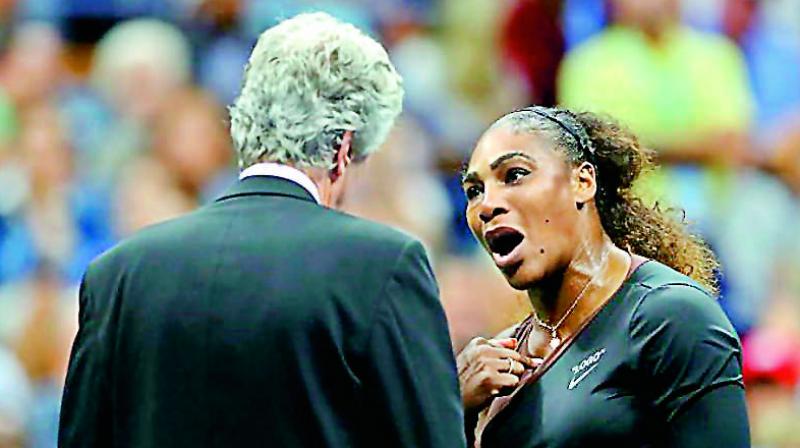 Serena Williams’ meltdown at the antics of the chair umpire Carlos Ramos during the US Open left Naomi Osaka as the first Japanese winner of a Grand Slam title. The final became an open war between Serena and chair official Ramos after Serena received a code violation for her coach trying to give her instructions while the match was on and another for breaking her racquet. She was even docked a full game for calling the umpire ‘a liar and a thief’.

It was in the second game of the second set that Williams was warned for receiving coaching, a charge she vigorously denied. “I don’t cheat to win,” she said. “I’d rather lose,” she added. Her coach, Patrick Mouratoglou, admitted in an interview to ESPN that he was trying to advise her with a hand gesture, although Williams was apparently oblivious. “The star of the show has been once again the chair umpire,” he tweeted. Should they be allowed influence the result of a match?

Many in the tennis world are convinced that the umpire went overboard in docking a player for being coached when she may not have even been aware of the gesture. Although there were some who did not see it as the fight for women’s rights that Serena made it out to be.

Serena had the support of the great champion, Billie Jean King, 75, who was in the stands. “When a woman is emotional, she’s “hysterical”and she’s penalised for it/ When a man does the same, he’s outspoken: & there are no repercussions. Thank you @serenawilliams, for calling out this double standard. More voices are needed to do the same (sic),” she tweeted.

A penalty for coaching from the sidelines is unprecedented at this level of the game and only overbearing umpires could do such a thing. What happens when the umpire’s ‘final word’ is prejudiced as it seemed to be on this occasion?

Gestures are fairly routine and even Rafael Nadal’s uncle Tony does it frequently. Cinematic Legend (@ItsRomy) tweeted: “The rules are not applied fairly by the umpires in tennis.  Coaching happens in every match. Nadal was coached by Uncle Tony every match & he was never assessed a code violation in a match let alone in Grand Slam final. Male players routinely cuss out umpires with 4 letter words.”

Sharon Tung (@Fire66horse) tweeted: What about Thiem’s epic racquet demolition in the 3rd rnd against Fritz? What about Kyrgios? Nadal smashing his water bottle? If you believe this was NOT a sexist call for conduct unbecoming, you haven’t been paying attention or you hold men and women to different stands.” A case could easily be built up on why Serena lost her cool.

Chris Evert had this to say, “Ok, last reflections in case anyone cares (SMILEY) warning for coaching was fair, but everyone coaches and we need to change that rule.. and Carlos could have should have told or warned SW about the verbal abuse/rule before he enforced it.” Considering these facts, the fury at the fuss Carlos created was understandable.

There is another viewpoint too. As Andrew Clem (@AndrewClem10) tweeted: “Serena’s meltdown was uncalled for and just sad and to make it worse she tried to manipulate the situation by saying she was fighting for women’s rights and playing that card in this situation undermines legitimacy of women who are actually fighting for legitimate causes.”

The WTA may have had the final word on the issue. In an official statement at the US Open, WTA said, “There are matters that need to be looked into that took place during the match. For tonight, it is time to celebrate these two amazing players, both of whom have great integrity. Naomi is a deserving champion and Serena at all times plays with class and makes us proud.”

What Serena did on the podium in warmly acknowledging Naomi’s victory showed a great deal of sportsmanship. This was Naomi’s moment and Serena wanted her to be able to enjoy it. “That was a class move from a true champion. I know she was frustrated about the way the match played out, but the way she stepped up after the final and gave full credit to Naomi for a match well-played speaks volumes about who she is,” said Katrina Adams, head of the United States Tennis Association (USTA).