Meet three city-based sportswomen who have made unconventional choices, and still earned laurels with their courage and determination. 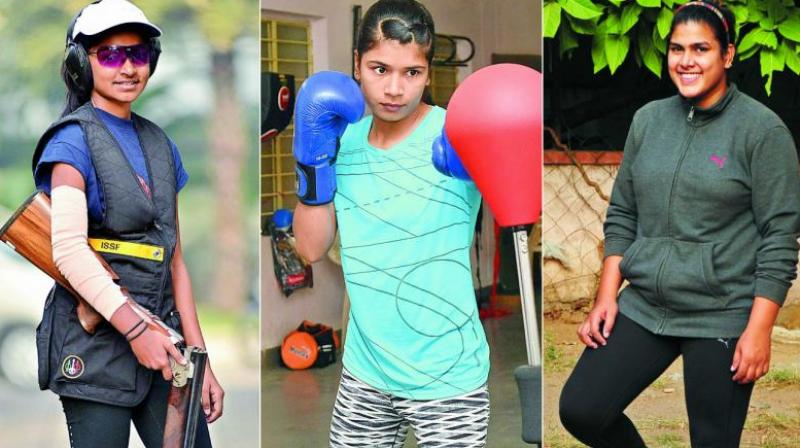 Shooting: Katyayani Raju Dandu
‘I took up shooting since it is a rare sport’

Katyayani Raju Dandu took up shooting because she wanted to take up an uncommon sport. She recently won two silver medals in the South India Clay Pigeon Skeet shooting championship and was the youngest player to do so.

“I took up shooting only three months ago. My best friend, Subhash, was into it and I only wanted to check the sport out. But once I started, I really liked it. My grandfather, too, was a regular,” says Katyayani, who is studying in Class IX at Oakridge International School.

Katyayani believes that shooting is a very rare sport and that’s why she took it up.  “People think it is hard, so they take up an easier sport instead. Until they play the sport, they wouldn’t really know how exciting it is. I wanted to do something unique. You need a lot of concentration and focus,” says the 13-year-old, adding, “There are not many tournaments that are held down South. They don’t have proper shooting ranges and vast areas.”

“A lot of people ask me if I like the sport and if it is easy. I ask them to try it first before thinking that they can’t do it. I have encouraged a lot of my friends to take up the sport,” says Katyayani.

Her parents have been really supportive. “Whenever I go for tournaments, my mother leaves all her work and accompanies me,” she says. “I don’t want to stop shooting as there is no age limit for it. I want to go ahead and represent India at the Olympics,” says Katyayani, who trains under Shreyan Kapoor.

Nikhat Zareen took up boxing in 2009, when she was just 13 years old. The recent bronze medal that she won at the Elite (senior) Women’s Boxing Championship held last month is one of the many achievements that she has to her credit.

But the journey has not been easy. Nikhat was earlier into athletics and used to train in Nizamabad.  “I noticed that girls were a part of every other game, but not boxing. I asked my father for the reason and he told me that girls don’t have the guts to take up a game like boxing,” she says.

“When I said that I was interested, my dad supported me. I was strong, stubborn, a tomboy and thought that the sport would suit me best,” says Nikhat, who is pursuing her BA from A.V. College.

Since there were no other girls, Nikhat would train with boys. “One day I hurt my eye and when I came home, my mother started crying and complained that nobody will marry me. I told her that this sport will make me famous and then boys will queue up to marry me,” she jokes.

Nikhat cites Muhammad Ali as her inspiration. “When I got to know about Mary Kom and how in spite of being a mother of three, she practiced religiously and got us an Olympic medal in boxing, her story motivated me further. I started training in Nizamabad, but shifted to Hyderabad in 2014 to train under Emani Chiranjeevi,” says 20-year-old Nikhat. Though her family was going through tough times financially, they made sure that Nikhat got all the support from their side.

“I got sponsorship from JSW Sports in 2014. Earlier, it was very difficult for my family to support me financially. I would attend a lot of boxing camps and my family would have to take care of the expenses. In 2014, Chief Minister of Telangana, K. Chandrasekhar Rao, awarded me a cash prize of Rs 50 lakh and that helped me to a great extent,” she says.

Malli Priya Madhuri was always interested in sports but her family never encouraged her to take it up. She was instead asked to concentrate on her education. But once she graduated, and was independent to take her own decisions, things fell into place.  In 2015, when Madhuri was 21 years old, she took up boxing, proving that it is never too late to follow a passion.

“I thought that girls can be good at this sport too and wanted to give it a shot,” says Priya adding, “When I first approached Omkar Yadav to train me, he rejected me saying that I am already 21. He was right because most people get married and the effort they have put in goes wasted. But I wasn’t the one who would give up.” Priya practiced for two months and got selected for a national championship which was to be held in Assam, but couldn’t perform.  She gave up the sport for the next few months, and instead was planning to move to the US. But a couple of months ago, with just twenty days of practice, she won the Gold medal at a state-level boxing tournament. “I was then selected to represent Telangana at the Elite (senior) Women’s Boxing Championship held last month and won a Bronze medal. This was possible because Omkar sir agreed to enroll me and has been a great support and mentor. But I am expecting a full-time coach.”

Priya agrees that the interest in the sport is not so common and feels that there is no proper encouragement. “Parents often don’t support their child’s interest. I was interested in hockey when I was 10. If they had supported me then, I would have been a much better sportswoman by this time. Though they (parents) are proud of me now, they still don’t openly encourage me,” she says, adding, “I worked as an Assistant Accountant with Levonsys. When they read about my gold medal, much later I had quit the job, the company still came ahead to sponsor. Such gestures give us the much-needed support.”