The draw leaves Barca still leading with 35 points from 16 games but Real Madrid, on 34, can take over at the top with a win at Valencia. 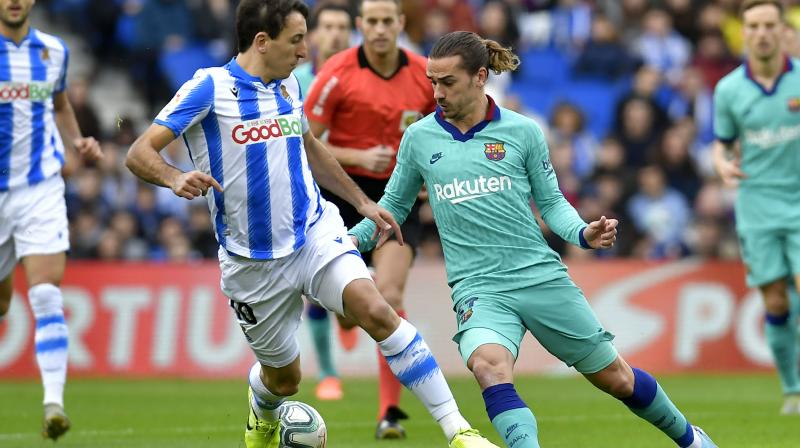 Real Sociedad went ahead in the 12th minute with a Mikel Oyarzabal penalty but goals from Antoine Griezmann and Luis Suarez either side of halftime put Barcelona in front, only for Alexander Isak to level shortly after the hour mark. (Photo:AP)

SAN SEBASTIAN: Barcelona lashed out at the referee after their six-game winning streak in all competitions came to a halt on Saturday with a 2-2 La Liga draw at Real Sociedad in which they conceded a penalty and had an appeal for a spot-kick turned down in added time.

The draw leaves Barca still leading with 35 points from 16 games but Real Madrid, on 34, can take over at the top with a win at Valencia on Sunday, perfectly setting up a mouth-watering midweek clash between the two giants at the Camp Nou.

Sociedad are fourth in the table on 28 points, three points behind third-placed Sevilla who play on Sunday.

The hosts went ahead in the 12th minute with a Mikel Oyarzabal penalty but goals from Antoine Griezmann and Luis Suarez either side of halftime put Barca in front, only for Alexander Isak to level shortly after the hour mark.

Both sides went looking for a winner in a frantic finale and Barcelona had a strong penalty shout waved away in stoppage time when Gerard Pique was tugged by defender Diego Llorente.

The incident appeared to provide a stronger case for a penalty than when Barca’s Sergio Busquets was punished for grabbing Diego Llorente’s shirt early in the game.

An aggrieved Busquets questioned why referee Javier Alberola Rojas was not instructed by the video assistant referee (VAR) to review the late incident involving Pique on the screen.

“If you set the bar so low as in the first penalty then you have to give a lot of penalties. The VAR should have intervened in the last play, it’s a clear penalty against Pique,” he said.

“I think the referee saw it but he didn’t want to award it. I don’t know why the VAR didn’t intervene. I’d like to hear an explanation but there won’t be one.”

Spain international Oyarzabal sent Barca keeper Marc-Andre ter Stegen the wrong way from the spot to give Sociedad the lead but Griezmann levelled in the 38th minute by scoring against the club where he began his career.

The French forward, who entered Sociedad’s youth academy aged 13, opted against celebrating after nonchalantly scooping the ball over keeper Alex Remiro to score, having been played in by Suarez in a sweeping counter-attack.

Suarez put the Catalans ahead in the 49th minute, passing a lay-off from Lionel Messi into an empty net.

But Sociedad levelled when Ter Stegen failed to properly punch away a cross from Nacho Monreal and Swedish youngster Isak pounced on the loose ball to smash it home from close range.

“Both teams had their moments and their chances and either side could have scored a third goal,” said Griezmann.

“It’s a shame we could only draw. We gave everything but now we have to learn, improve and focus on the Clasico. They made a very good start and we got our tactics wrong but in the end we fixed it and we created chances to win the game.”