From Syria with love for Putin

Samanda, a chirpy girl in the team of Putin supporters, said the group’s composition is a reflection on the mentality of the youth in her country. 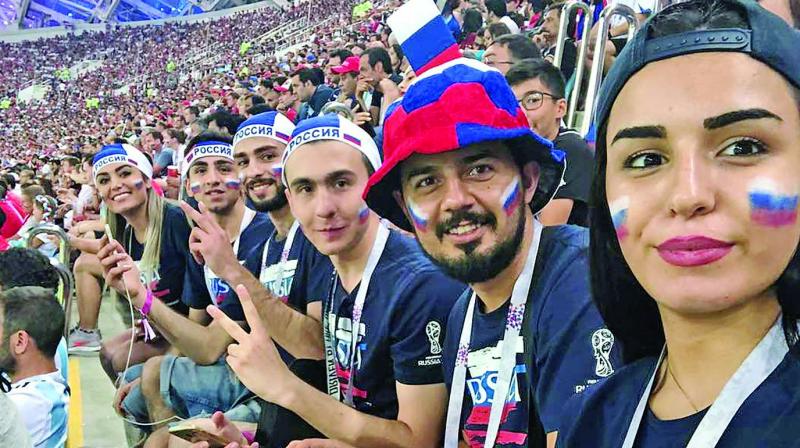 A group of Syrian fans at World Cup.

Sochi: A group of Syrian fans are in Russia not for the World Cup but for Vladimir Putin, the country’s president. “We are here to express our gratitude to Putin for supporting the Syrian government in the war against Islamic State and other divisive forces. Without the help of Russia, there would be no Syria today,” said Majid, who expresses his political convictions eloquently.

Every member of the team attended the Croatia-Russia match here on Saturday, clad in a Russian jersey. They were singing Putin’s praises even hours after the match had got over.

Majid had no hesitation in calling the group’s visit to Russia political rather than sport-related. “Putin is our saviour. We would be under the control of a religious bigot like IS if not for his timely intervention. Syria owes its existence to him. We would eternally be thankful to him,” he added.

Michael Attalla, another leading member of the Syrian team, said Syrian people are unwelcome all over the world but not in Russia. “If the World Cup had been in some other country, I’m sure we wouldn’t have been allowed to visit it. We are most unwanted in Arab countries that speak the same language and practise the same religion. Russia treated us like human beings when we applied for tickets and visa. Dignity is important to all,” he added.

The group spearheads a movement in Syria that helps people affected in the civil war, which has been muddied by the involvement of outsiders including Russia. “We get material support from Chechnya leader Ramzan Kadyrov to help the needy in Syria. We want to thank him as well,” said Majid.

When asked about getting help from someone who has a questionable human rights record in the Russian province, Majid said he was only looking at Kadyrov’s charitable side. “Everybody has flaws. I’m happy that he is helping our people,” he added.

He said the same applied to his country’s leader Bashar al-Asad, a starkly polarising figure in the Arab world for the brutal methods he adopts to quell dissent in Syria. “He is not perfect. But he is better than Islamic State any day. We want to live in a free, liberal country. I think Asad alone can keep Syria together in the present scenario,” he added.

Samanda, a chirpy girl in the team of Putin supporters, said the group’s composition is a reflection on the mentality of the youth in her country. “Religion is not central to our lives. Majid is a Muslim, Michael a Christian and I’m a Kurd. We are all one in support of our government because we don’t want Syria to be destroyed,” she added.

The Russian football team may have lost in the quarter-final but the Syrian team said their World Cup visit was a roaring success because it caught the attention of many.