India's Jasprit Bumrah, out of action due to COVID, has slipped to eight 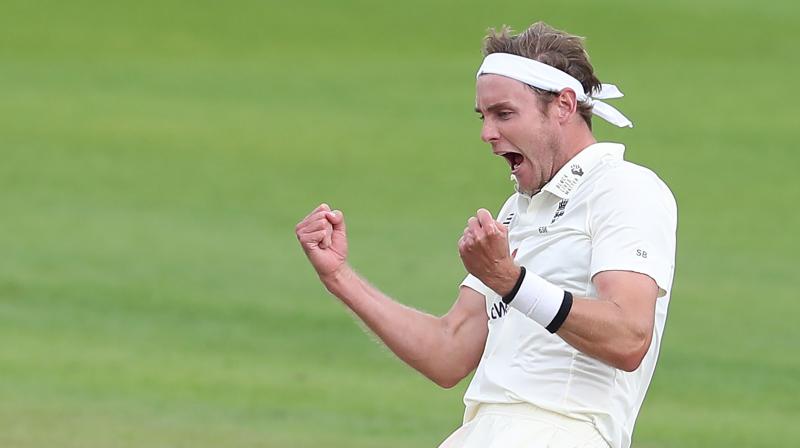 England's Stuart Broad celebrates after taking the wicket of West Indies' Roston Chase on the second day of the third Test cricket match between England and the West Indies at Old Trafford in Manchester on July 25, 2020. (AFP)

Dubai: Stuart Broad leaped seven places to take the third position among bowlers in the latest ICC Player Rankings after a stellar show in the final Test against the West Indies.

England won the third and final game by 269 runs to clinch the series 2-1. Broad finished with a match haul of 10 for 67 and attained the milestone of 500 Test wickets.

The formerly top-ranked bowler has reached his best position since August 2016 when he was third in the ICC bowler rankings.

The 34-year-old also gained seven places with the bat after his quick-fire 62 off 45 balls in the first innings, the joint-third fastest for England in Test history. He's risen three places among all-rounders to 11th. Here's the Top Ten list.

Indian cricketers, who have not taken the field since March due to the COVID-19 pandemic, retained their positions in the top-10 of batting rankings.

In the list of all-rounders, Ravindra Jadeja and Ravichandran Ashwin continue to occupy the third and fifth spot respectively.

With Broad moving seven places to break in to the top 10, India's Jasprit Bumrah was pushed down a spot to be placed eighth in the bowlers list.

Another England bowler to advance in the rankings was Chris Woakes, whose five-wicket haul in the second innings lifted him to 20th position and a career-best rating points tally of 654.

England opener Rory Burns gained 13 spots to reach 17th position after scores of 57 and 90 at Old Trafford, the first time the 29-year-old left-hander has moved into the top 20.

Ollie Pope reached a career-best 46th position, gaining 24 slots on the back of his 91 in his only innings of the match, while wicketkeeper Jos Buttler's knock of 67 lifted him from 50th to 44th.