Styris feeds the lads on a day off

The former all-rounder used the day off to cook his counterparts from the commentary box. 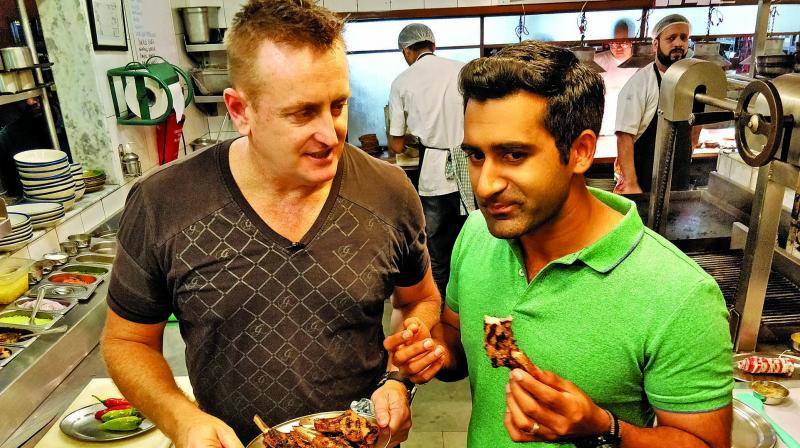 One thing about the Indian Premier League is that it goes on without a breather. The fans are the ones who get to have the benefit of watching gripping contests every day, but the players are on the receiving end with tight schedules. Apart from the players, the commentators and the analysts are equally involved while the season goes on.

After the league stages were over, there was a short break before the first qualifier between Chennai Super Kings and Sunrisers Hyderabad at Wankhede. Most of the commentators were in the city for the same.

On Tuesday, a major part of IPL’s commentary panel headed out for lunch to Bombay Canteen in Lower Parel. The special chef for the afternoon  was Scott Styris, who fed a group of ex-players including Graeme Smith, Dean Jones, Darren Sammy, and Brett Lee.

The Kiwi all-rounder cooked an Indian version of New Zealand lamb chops for his commentary box counterparts in the restaurant’s kitchen.

All of the above mentioned former cricketers are spending most of their days in Mumbai. They are here as analysts and commentators for Star Sports Select Dugout programme and its headquarter based in the city.

Lee and Styris visit the city more than often apart from their work with the IPL. However, this time the duo utilized it to the maximum. They visited some joints in the city to learn about the delicacies. Trying out some street food to a limited extent to not fall sick, the idea of cooking for everyone came to Styris.

“It was actually a day off. Brett Lee and I enjoyed ourselves one afternoon around the city,” says Styris talking about the thought of cooking for the rest. “We decided that we would go back and attempt a fusion of Indian cooking and lamb chops that I’m used to from New Zealand,” he says.

While the most of them were surprised with Styris’ skills in the kitchen, Lee goes back to the other meals that were served to him by the cook of the afternoon. He is not a complete fan of Styris’ cooking. Binga would still prefer eating the food from his former teammate Matthew Hayden’s pan.

“Matthew Hayden is a really good cook. Scotty Styris is pathetic. I mean… he burns water,” says Lee who has been to many eating joints in Mumbai with the New Zealand all-rounder.

“He must have zero taste buds, Scott. Because every time he tries to cook something, he wrecks it. Lamb chops were nice. That’s the first tasty thing he has cooked on this whole trip,” Lee added.

Lee has been a patron of the country. Not when he was a cricketer but surely after hanging up his boots. He has worked in a movie named ‘UnIndian’ and  recorded a song with Asha Bhosale that came out a decade ago. “I’ve been here a lot in the last 24 years. You know it could be 130-140 days a year that I am in India and I spend a lot of time in Mumbai,” says Lee.

But Styris looks more intrigued to come out and find out about different delicacies especially in Mumbai. “I have spent a huge amount of time here including at the local restaurants and cafes to explore as much as I can,” he says.

The break between the league matches and the playoffs allowed the duo to explore the city and learn a thing or two about each other’s cooking. Lee is not a fan of Scotty’s food and the feelings are mutual.

“Two names that spring to my mind (as good cooks). One who is definitely not and that is Brett Lee. He overcooked an egg once,” he says. “And the other one who prides him and thinks that he is Gordon Ramsey that’s Matthew Hayden. Do I agree? No, because he is an Australian,” Styris chucckles.