Cricket was supposed to be the genteel game played by gentlemen who shook hands after a match regardless of whether they ended up winning or losing. 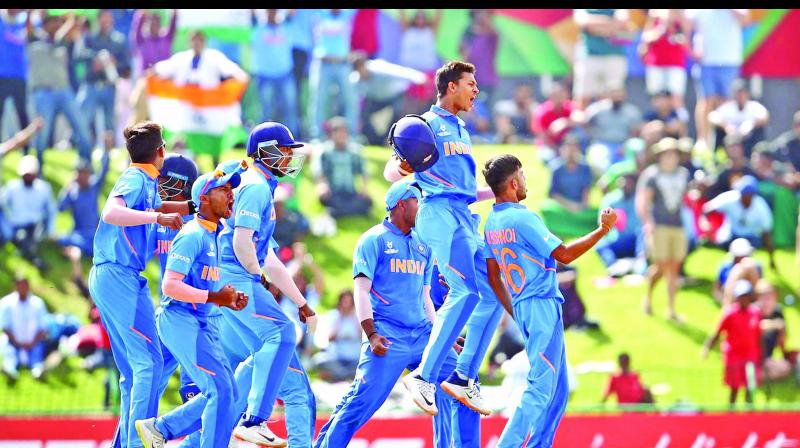 It does seem at times in modern cricket that there is more aggravation than substance. Take these kids playing the World Cup at the Under-19 level and behaving at the fall of each wicket as if they had won an Olympic gold medal. And Olympic gold medallists have far more sense in them as they are invariably champions of their sport. They would make an eloquent gesture like Usain Bolt’s bow and arrow gesture at the sky.

Cricket was supposed to be the genteel game played by gentlemen who shook hands after a match regardless of whether they ended up winning or losing. But no, nowadays everything is theatrical because of the ubiquitous television cameras that beam games live around the world. Picking up histrionic ability seems to have become a priority.

The scenes witnessed in South Africa were not of the type associated with a game of cricket, regardless of how hard the teams had fought. All these grandiloquent gestures — called a “send-off” to batsmen on their dismissal — have been around for a while too. But very few led to batsmen and bowlers coming face to face as if in a boxing ring, all ready to slug it out.

What sort of an example have the senior players been that we should see the young Bangladeshi and Indian team players behave like this? Also, it was quixotic to see Shardul Thakur, who was leaking like Swiss cheese in the final ODI against New Zealand stand with his arms akimbo and gesture like a great warrior at a battle after a conquest.

Shardul had bowled that ball so wide that Henry Nicholls was guilty of converting it into a legal delivery by nicking it and here was the bowler giving him such a send-off. His figures by the way were 1 for 87. Maybe, it’s time he was shown a tape of Kapil Dev’s 8-106 in the Adelaide Test of 1985-86 when the great bowler would shake any colleague’s hand if it was extend to him or he would quietly walk back to his bowling mark for the next ball after taking a wicket.

In modern cricket the St. Vitus Dance has become compulsory after taking a wicket. This is a kind of ritual that is doing the game no good. There was a time when Bishen Bedi would walk away quietly whenever he took Barry Woods’ wicket because he thought it was no big deal and didn’t even want his colleagues coming up to shake his hand. To say things have changed would be the understatement of the millennium.

The Bangladeshi cricket fans are known for following the game passionately. Sometimes they carry this jingoism to extremes with all kinds of gestures that have no place in polite society. And yet they are just fans who are out for a good time and believe in their excesses in the name of their being ever so loyal to their national team’s cause, much like the Brazilian football fan. It is the players who stood on the boundary line even before the match was won and making ugly gestures who had to be reprimanded. And there were a whole load of Bangladeshis there.

Their crass behaviour does not take away the worth of their nation’s first ever win in any ICC event, senior or junior. They thoroughly deserved to win after using the damp in the pitch to good effect by choking the early scoring of Jaiswal and company. Far from blaming them for not being gracious enough in victory, I would take the Indian kids to task too.

The Indians are the giants of today’s world cricket, with a global fan following to boot.  But it does not mean they had to behave like the Aussies used to when they were the all-conquering team. The Indians, accustomed to being a soft power, have not needed to be overly aggressive. But there was a time when demonstrativeness of aggression was thought to drive performance. This was when Team India’s cricket was rising towards its desired goals of winning World Cups and topping the Test table and India’s stock as a nation seemed to be rising too.

To tone down their behaviour, the Aussies had to undergo the sandpaper scandal. Maybe, the Under-19 fracas on the field after the final should be the chastening lesson for Team India too even if we know that the Bangladesh cubs were the major culprits on the given day.  Surely India does not have to compete with the Bangladeshis in the aggression stakes. Just look at it this way — isn’t cricket the great leveller? Just consider Team India being Kiwi-polished 3-0 after beating the New Zealanders five to nothing in the T20i series.

Much the same thing will happen to today’s victors when today’s losers get up on their feet to win tomorrow. But, when they do, they should remember to leave the aggression behind in the heat of battle. This is sport, not war.