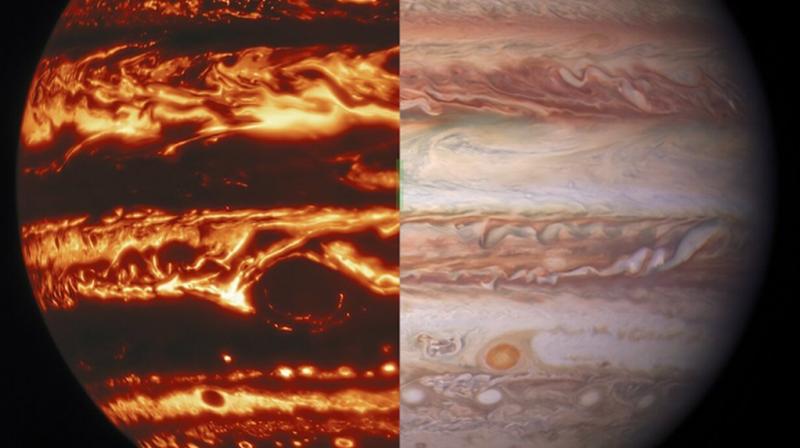 NASA's Juno spacecraft has discovered that the monster storm, though shrinking, still has a depth of between 200 miles (350 kilometers) and 300 miles or so (500 kilometers.) When combined with its width of 10,000 miles (16,000 kilometers), the Great Red Spot resembles a fat pancake in new 3D images of the planet.

The mission's lead scientist, Scott Bolton of Southwest Research Institute, said there might not be a hard cutoff at the bottom of the storm.

It probably fades out gradually and keeps going down," Bolton said at a news conference.

The research was published Thursday in the journal Science.

The Great Red Spot is probably the tallest Jovian storm measured so far with Juno's microwave and gravity-mapping instruments, Bolton said. Thousands of storms rage across the gas giant at any given time  beautiful and colourful swirls, plumes and filaments covering the entire planet, as seen by the spacecraft's camera.

Still ahead for Juno: measuring the depth of the polar cyclones, which might penetrate even deeper beneath the clouds.

I wouldn't want to be too quick to guess that we've seen the deepest," Bolton told reporters. "But the Great Red Spot is the largest and that makes it special by itself, and you might expect that it might be deeper just because of that.

By contrast, some of the surrounding jet streams extend an estimated 2,000 miles (3,200 kilometres) into Jupiter.

Launched in 2011, Juno has been orbiting the solar system's largest planet since 2016. NASA recently extended the mission by another four years, to 2025.