Allowing people to collect their own sample has many advantages, like increasing testing capacity by distributing more collection kits 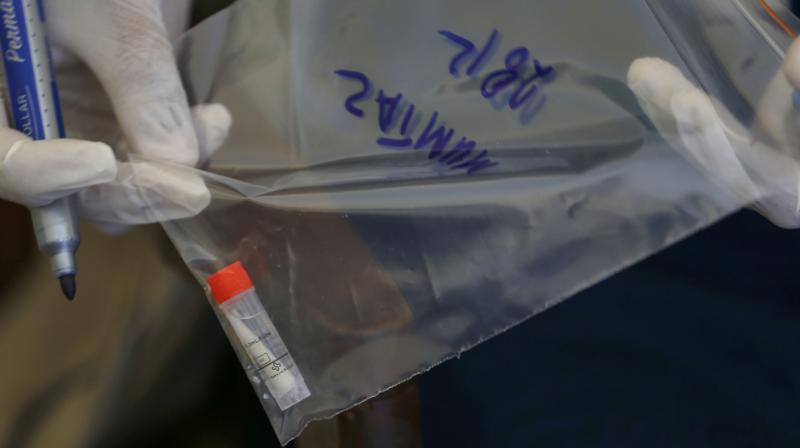 A health worker preserves a nasal swab sample of a person. (AP)

In the study published in the Journal of the American Medical Association, 30 participants, who previously had tested positive for COVID-19, collected their own samples at a drive-through testing site after watching a short video animation and reading a one-page document instructing them how to perform the swab.

The researchers at the Stanford University in the US noted that nasal swab for the study is more comfortable to use than the long nasopharyngeal swab currently used to collect samples from the back of the nasal cavity.

Allowing people who suspect they may have COVID-19 to collect their own sample has many advantages, the researchers said.

Sample-collection kits could be widely distributed, allowing more people to be tested, they said.

Those using the kit wouldn't have to travel to a testing site, negating the risk of transmission to health care workers and others with whom they interact in transit, according to the researchers.

"There is an urgent need to increase our testing capacity to slow the overall spread of the virus," said Yvonne Maldonado, a professor at Stanford.

"A sample collection procedure that can safely and easily be performed by the patient in their own car or at home could reduce the exposure of health care workers and also allow many more people to submit samples for testing," Maldonado said.

The study participants had tested positive in March at Stanford Health Care for the virus that causes COVID-19.

Maldonado and her team contacted each of them by phone at home and provided them with written instructions and a short video about how to collect a nasal swab.

They were asked to return to Stanford Health Care for drive-through testing. At that visit, they collected their own specimen by applying a nasal swab to both nostrils.

Then, a physician collected two additional samples using a nasal swab and a swab applied to the back of the throat and the tonsils. All three samples were tested for the presence of the virus, the researchers said.

Of the 30 participants, 29 received identical results -- either positive or negative for the presence of the virus -- for the three samples, they said.

Eleven of the participants were positive, and 18 were negative. One person's self-collected swab at the drive-through site revealed the presence of the virus, whereas the two swabs collected by the physician tested negative, according to the researchers.

They were also interested in learning how long an infected person would test positive for the virus after they first experienced symptoms.

Twenty-three participants reported that they first experienced symptoms between four and 37 days prior to returning for the drive-through test.

"It is critical for us to understand how long an infected person may remain infectious and what the pattern of transmission might be within their household," Maldonado said.

"This information would help public health workers craft guidelines as to how long a person with COVID-19 should remain quarantined and when it is likely to be safe to interact again with family members and co-workers," he said.