An obsession or a reality?

As a rising power, India should not focus only on Pakistan at the UN and elsewhere. 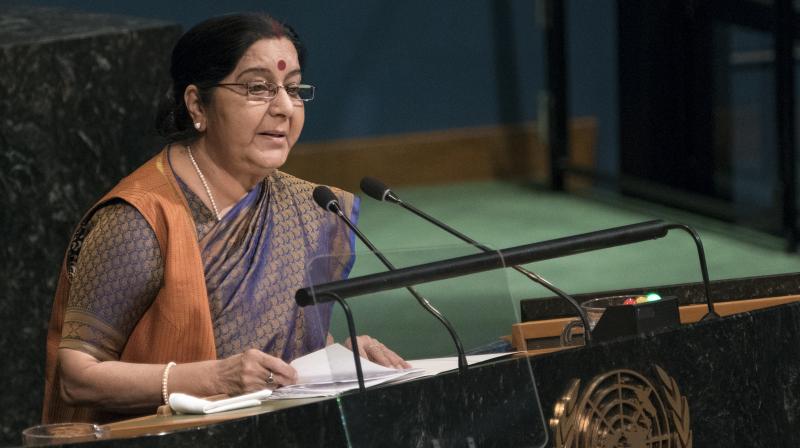 Time to get over Pak, our obsession
Surendra Kumar

Sushma Swaraj’s recent speech at the UNGA was arguably the strongest critique of Pakistan by any Indian external affairs minister in recent years. It was cogent, focused and well argued. It was supported by irrefutable facts and delivered in a robust, unsparing but dignified manner which left none in doubt about what she was conveying. It seems to have resonated well not only with India’s friends but also with BJP’s domestic constituencies. She showed a clear mirror to Pakistan by contrasting her failures and India’s achievements. Ms Swaraj might have unwittingly planted a tiny seed in the minds of Pakistan’s Gen Next to ask searchingly, in private if not in public, what their successive governments, the Army and the ISI have done to their country since its birth and why their country is perceived in the world as the breeding ground and the epicentre of international terrorism.

Like the electronic media, successive governments have been spending disproportionate time, energy and efforts on Pakistan and mostly reacting to what it does. This excess focus on Pakistan at the UN gives undeserved significance to it and makes it look like India’s equal which it isn’t except in the field of nuclear arsenal. Pakistan is like oxygen for prime-time TV discussions for raising their TRPs. We all know why the national security advisers of India and Pakistan had to meet in Bangkok. Without lowering our guards and taking care of all transgressions on the border, just ignoring Pakistan for a year or two at the UN won’t do any harm to India’s national interests.

India has no political, defence or economic leverage with North Korea. Yet, as the former peace keeper on the Korean Peninsula in1950s and having normal relations with Noeth and South Korea and the US, India can, behind the scene, help bring down the rhetoric and belligerent accusations and counter accusations between the US and North Korea. It could facilitate a civilised dialogue which will spare the world of a dangerous crises.

India-US relations have never been better. No American President has done such tough talking with Pakistan and advocated India’s active participation in Afghanistan as has Donald Trump. India also enjoys close and multi-layered relations with Iran. Narendra Modi is the only world leader who can hug Mr Trump as well as Iran President Hassan Rouhani. He might be able to advice Mr Trump in private that cancelling the nuclear deal and precipitating crises with Iran wasn’t in America’s national interests.

India must translate Modi’s Mantra: Neighbours first by reaching out to neighbours proactively by establishing mutually beneficially linkages and synergies rather than reacting to what China has been trying to there.

In the last three years, the President, the vice-president and the PM have visited more African countries than in the last 30 years. This is commendable and the right thing to do. We must create goodwill and trust by helping Africa in skilling, training and harnessing local talents.

With Mr Trump’s interest in Asia wavering, India should along with Asean, Japan and Australia demand more energetically South China’s Commercial sealanes free from China’s domination.
The writer is a former ambassador to Libya

It’s by our efforts, we are making headway
Harish Khurana

External affairs minister Sushma Swaraj, in her address to the United Nations General Assembly on Saturday, showed the mirror to Pakistan by highlighting the differences between approaches of the two nations. She said that while India has built IITs and IIMs, Pakistan built Lashkar-e-Tayyaba and Jaish-e-Mohammad. Highlighting the Indian government’s schemes, she said that India is fighting poverty, but Pakistan is only fighting its neighbour.

Ms Swaraj asked Pakistan’s leaders to introspect as to why India is recognised as a global IT superpower while Pakistan is infamous as the “pre-eminent export factory for terror”. Ms Swaraj’s measured response in spite of provocations speaks volumes of her maturity. She has exposed Pakistan’s duplicity on terrorism.

Her speech was one of the most powerful speeches in recent times at the UN and has been applauded by several leaders within the country as well as outside.

Some say that India is only focusing on Pakistan at the UN, but I disagree. Today, India is considered an emerging power. We see a lot of changes in the approach of world leaders towards India. It is a matter of great pride when Prime Minister Narendra Modi visits any country and their premiers break all protocols to welcome our leader. When he speaks, the world listens.

Coming back to the UN and other forums, we have successfully changed the approach of the world towards terrorism. Previously when these issues came up on international forums, they would say it’s India’s internal matter. They used to differentiate terrorism as good terrorism and bad terrorism. But now things have changed. India’s stand towards climate change was also appreciated by most of the countries. It was India which spoke hard when US President Donald Trump made some allegations towards India on climate change and walked out of the Paris Accord. On climate change, Ms Swaraj at the 72nd UNGA session said that India is deeply committed to the Paris Accord. Mr Modi also launched the International Solar Alliance aimed towards this cause.

We are also showing the world how successfully we are trying to fight poverty and have launched schemes, like Mudra Yojana, Jan Dhan Yojana, “Start-up India, Stand-up India”, and have also implemented economic reforms like GST and demonetisation for fighting evils like black money.

India has displayed courage and leadership to take tough decisions, and has launched interlinked process of sustainable development.

When India attaches highest priority to development and prosperity of the region under “neighbourhood first” policy, we truly believe that the world is one family and we hope that every member of this family deserves that elixir of life, happiness. And this stand was applauded by most of the countries at the UN.

It was India’s clout and importance at the forum that the whole world adopted and accepted the importance of yoga and made June 21 World Yoga Day.

It’s our right to expose Pakistan when they raise Kashmir issue at the UN. Also, it is our responsibility to raise and discuss issues like climate change, cyber security, terrorism, nuclear and maritime security, removing poverty and other economic issues which we have raised previously and raised this time too.

The writer is BJP spokesperson