Governor’s Rule may now be the best option to tackle the drift in Kashmir. 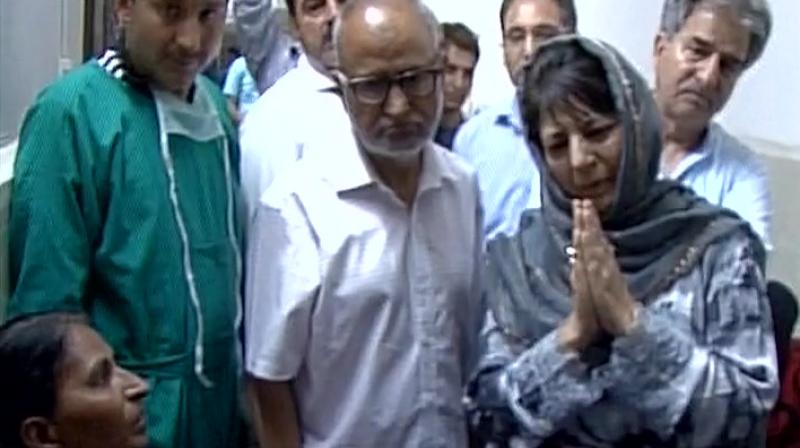 How can J&K police be trusted?
Vinod Bansal

It was due to the failure of the Jammu and Kashmir government that terrorists managed to carry out such a dastardly attack on the Amarnath yatris.

There were definitely serious lapses in the security arrangements. The Vishwa Hindu Parishad had raised these issues with the Mehbooba Mufti government in May itself.

No matter which political party is running the government in J&K, if that government cannot protect Amarnath yatris and provide security, then it has no right to continue.

How can we trust the state police when we all know that it harbours many supporters of terrorists and separatists in the Kashmir Valley? There have been many incidents when local policemen had joined the forces which have been waging war against our country.

We all know that it is the Army that has provided security cover to some of the police stations in the region.

We had also requested that the alternative Kargil-Drass route to be opened. The Supreme Court and the Shri Amarnath Shrine Board also recommended this, as this route requires less time and pilgrims can return the same day in the evening after the darshan. We had very specifically demanded that the entire route be sanitised and the security should be beefed up.

Everyone knows how separatists are getting support from across the border. We also know how they are grooming stone-pelters in the Valley and supporting terrorists, but the government has failed to check that.

Why has no firm action been taken against these separatists?  Why are they being given security cover?

Why are they even allowed to enjoy facilities that are for citizens of this country, when separatists are nurturing anti-India elements?

Actions should also be taken against those who sympathise with the separatists and stone-pelters, who run a systematic campaign against the use of pellet guns and who in the name of secularism try to give a communal colour to everything in the Valley.

Even the media, specially the local media, which indulges in one-sided reporting, needs to be banned.

It’s high time that a fitting response be given to those who play politics over such issues.

The attack on the yatris was carried out as part of the gameplan to threaten the pilgrims. But if these thugs think that they can scare us, they are wrong. Yatris have been visiting the Amarnath cave even when terrorism was at its peak in the state, and they will continue to do so no matter how difficult the situation. I am myself going there next week. Nothing one can stop us, and such incidents cannot scare us.
Vinod Bansal is national spokesperson of the Vishwa Hindu Parishad

Who rules or doesn’t is unimportant
Davinder Singh Rana
In the backdrop of the gory incident in which seven innocent Amarnath pilgrims were killed and many others wounded, I strongly feel this is not the time to find fault in others or speak about security lapses. It is time for all of us to get together irrespective of our politics, faith or region.

Nobody in Kashmir wanted the yatra to be attacked. This has been their genuine longing. The Amarnath yatra is a symbol of a built-in feature of Jammu and Kashmir’s composite culture and ethos. I think there is no match of such a secular activity when Hindu devotees are going to have darshan of a natural shivling in a cave and seek the blessings of Lord Shiva, and Muslims are facilitating their journey.

This is also a fact that the Kashmir Valley’s Muslims have always protected the yatra even in hostile situations. They have suffered themselves but never went against the pilgrims or the pilgrimage.

Now when this gruesome incident has happened, we have to ensure that the secular fabric of J&K is not disturbed. That should be our prime responsibility. I have no doubt in my mind that the July 10 act was a deliberate attempt to spread communal disharmony. Hence, the foremost thing we did the other day was to declare a bandh and get all communities together for a peaceful demonstration against violence.

All of us in Jammu are feeling the pain like the people in the Valley and the rest of the country. The civil society and other groups in the Valley came out on the streets to protest and express solidarity with the victims. It was not a usual condemnation but a genuine outpouring. We all are deeply hurt.

Terrorism has no religion. We should not try to cast aspersions on a particular religion or community. If we do that, it would be the greatest disservice done to the nation and J&K. Right now, putting the blame on the PDP is not going to ameliorate the situation.

Unless and until we join hands to make an effort to resolve the issue of Kashmir we will be standing nowhere. The state will disintegrate. Already there is an effort on to create the narrative that J&K will be trifurcated. In this blind alley, I feel there is, however, an opportunity for motivation.

Whether it is the PDP, Congress or any other party, we all must join hands to defeat the evil. Even right-thinking people in the BJP who genuinely feel for J&K think along the same lines. Politics is just for electoral gains — one may win or lose an election, but everything should not be looked from the prism of electoral politics. Governments come and go. Now it is time for Mehbooba Mufti, Farooq Abdullah, Omar Abdullah, Ghulam Nabi Azad, and other leaders across the political spectrum to come together.

A very sad incident has taken place. But there is light at the end of the tunnel. It has brought people from all faiths and regions together. Let us not try to point fingers at each other, instead let’s give politics a break and evolve a consensus. Who rules or doesn’t rule is not important.