Whenever a female is tormented in Kerala, the media goes knocking at their door. 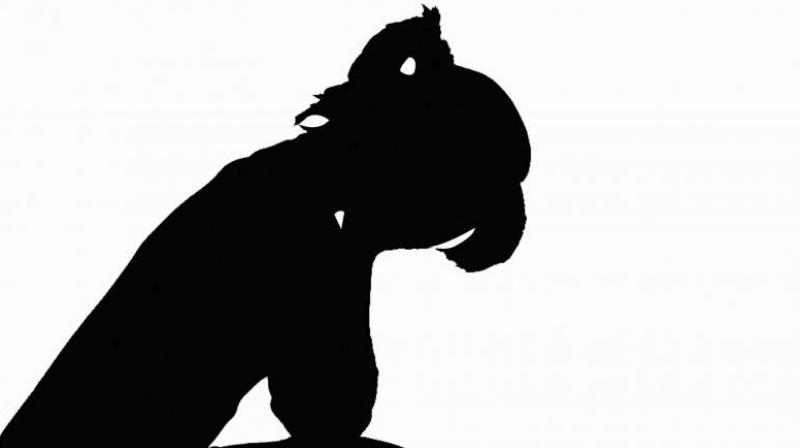 Whenever a female is tormented, the media goes knocking at their door. (Representational image)

When news broke out of the unspeakable trauma inflicted by a set of goons on one of South Indian cinema’s leading ladies in the teeming thoroughfares of Kochi, a father, a mother and their 36-year-old daughter living in constant fear of the public gaze some 70 km away from the place where the actor was violated would have quickly withdrawn into their house and shut their doors and windows tight. Whenever a female is tormented in Kerala, the media goes knocking at their door.

Hers was the mother of all torments in modern Kerala. When she was just a schoolgirl of 15, she was dragged around like a festival doll, handed over to 45 men who raped her many times over, and by the 40th day when the ordeal was over she was so frayed that it was impossible to put her back together, ever again. She is nameless, is flatly called the ‘Suryanelli girl’ after the village in Idukki from where she hails. Even after 21 years, nothing much has changed. She continues to live ostracised. A decade ago the family ran away from Suryanelli when, as her father said with trembling lips, “our beautiful home was turned into an ‘excursion point’ by tourists who came to Munnar”. (Suryanelli is a hilly village near Munnar). Now, living in a modest two-storeyed home in Kottayam, they seem like any other middle class Malayali orthodox Christian family. When this reporter made a visit in 2012, she looked mature beyond her age. She had a government job.

The survivor was implicated in a fabricated forgery case where she was accused of stealing Rs 2.69 lakh from the section where she was posted. The parents parted with their pension benefits to repay the money only to realise later that it was the handiwork of two of her colleagues who had since been slapped with punishment transfers. 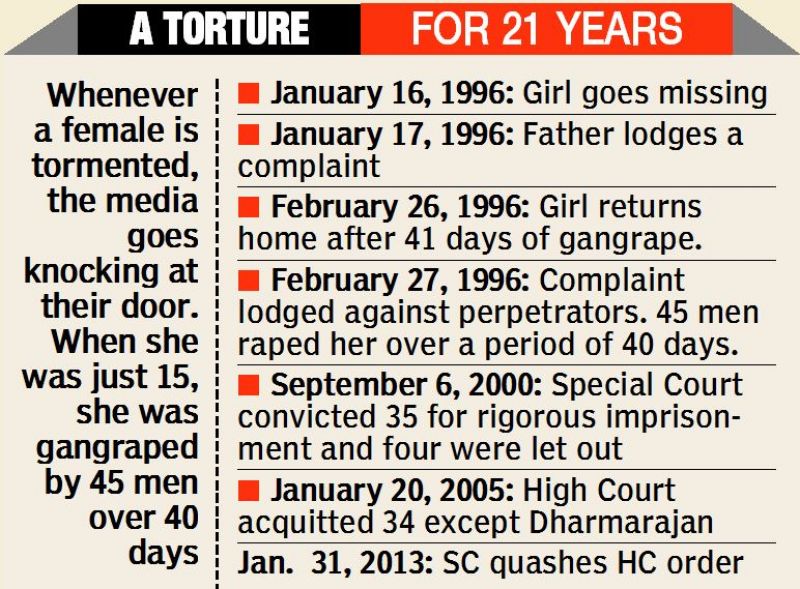 This time, when we got in touch with them, the family was reluctant to talk. “Nothing new has happened in our lives,” the father said, more out of weariness than out of irritation. He is 74, a retired postmaster whose health is deteriorating by the day.

The law, it seems, is their only hope. The 42 accused in the Suryanelli included powerful people.

A trial court awarded jail terms to 35 of them, but all except one were acquitted by the HC in 2005. The prosecution appealed to the SC, which asked the HC to look afresh at the case. Subsequently, 24 persons were convicted, 16 of whom appealed two years ago. The SC has issued notices to Kerala government where the appeal to the petitions is pending.

The mother, a former nurse, was reluctant to speak. She was frustrated that the media hounds them whenever there is a sexual harassment. She, like her husband, is suffering from heart issues, and had undergone an angioplasty. But health is the least of their concerns. Their biggest worry is future of their two daughters.

The elder one, who is three years older, is working as a nurse in the Middle East. She remains single. There seems to be a fear that the ‘prospective groom’ could turn against her family.

Amid all the anxieties, there are also fleeting moments of joy. Recently, the Suryanelli victim won a sari as prize for winning the musical chair contest and lemon and spoon race conducted at the office. She duly gifted it to Prof. Suja Susan George, her well-wisher. Her joy knew no bounds when she saw Ms George in the sari she had gifted. Probably that must be one of the rare occasions when she must have smiled with an open heart. Sadly such moments of bliss are drowned in a cacophony of taunts that constantly swirl around her from the neighbourhood and also colleagues.