Kim-Don row: World is at risk

A worried Xi Jinping, in a telephonic conversation with Mr Trump, called on all parties to “exercise restraint”. 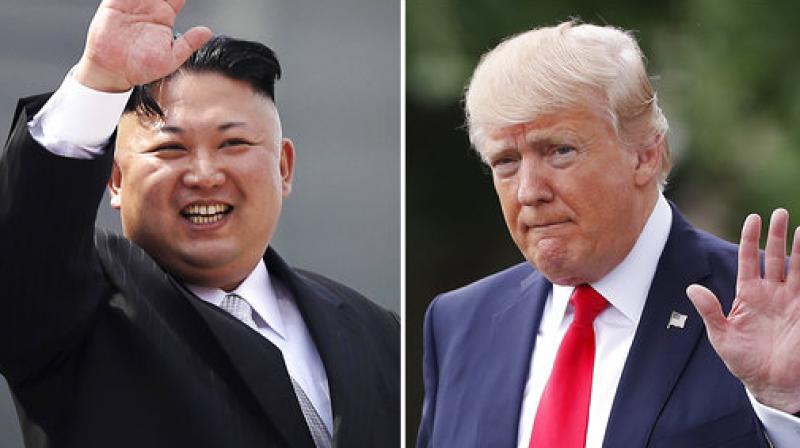 The last fortnight has seen an extraordinary exchange of rhetoric between North Korea and the United States. In response to UN Security Council resolutions tightening sanctions on North Korea after its two missile tests in July, Kim Jong-un said that he would fire four missiles over Japan into the waters off Guam and destroy the US territory in “enveloping fire”. President Donald Trump retorted that his forces were “locked and loaded” and he would launch “fire and fury” at his enemy.

The North Korean leader then seemed to draw back by postponing the attack near Guam, but said grimly that he could change his mind “if the Yankees persist with their extremely dangerous reckless actions”. He added the attack would be the “most delightful historic moment” when he would “wring the windpipes of the Yankees and point daggers at their necks”.

Soon thereafter, the top US military officer, Gen. Joseph Dunford, promised an “iron-clad commitment” to defend Japan, saying that an “attack on one is an attack on both of us”.

A worried Xi Jinping, in a telephonic conversation with Mr Trump, called on all parties to “exercise restraint”.

Behind this verbal sabre-rattling lies a long and convoluted narrative of US-North Korean ties, when the two sides have on occasion taken tentative steps to address their differences, only to fall into a quagmire of mutual mistrust, name-calling and military brinkmanship. The two countries had entered into solid agreements in the 1990s, when North Korea had agreed to freeze its nuclear weapons programme in return for US support for its civilian nuclear programme and massive humanitarian and development assistance, valued at about $750 million between 1995-2000.

However, in 2002, when President George Bush included North Korea in the “axis of evil” and rescinded the 1994 agreement, the country withdrew from the Nuclear Non-proliferation Treaty (NPT). As US sanctions became more tough, North Korea tested its first nuclear device in 2006, and carried out further tests in 2013 and 2016. It is believed to have fissionable material for about 20 nuclear devices. Separately, North Korea has steadily developed its delivery capabilities, even testing two long-range missiles in July that landed near Japan. There are indications that, by 2019, North Korea could possess ICBMs that will reach continental United States.

This will dramatically shift US priorities from concerns relating to its allies in Northeast Asia to the defence of the homeland. This possible shift has already led Japan to focus on augmenting its own capabilities by significantly increasing its defence expenditure and developing a land-based missile defence system, besides funding enhanced maritime security capabilities in the Eastern Atlantic.

The US and South Korea commenced their joint annual military exercises from August 21. These are invariably viewed as provocative by North Korea; it has described this year’s exercise as “pouring gasoline on fire”, while its official mouthpiece warned of an “uncontrollable phase of a nuclear war”.

Besides Japan and South Korea, the 10-day drill, codenamed “Ulchi-Freedom Guardian”, will mobilise a total of 80,000 troops from Australia, Canada, Colombia, New Zealand, the Netherlands, Denmark and the UK, and will include 17,500 US service personnel.

These exercises are the world’s largest and will simulate computerised command and control action in the event of an attack from North Korea. The latter views them as an aggression, particularly since nuclear-capable aircraft are expected to fly over its territory and “decapitation strikes” are rehearsed to target the country’s leader and top generals. North Korea has retaliated by announcing that 3.5 million of its citizens have volunteered to join the People’s Army.

China’s Global Times in an editorial has criticised the exercises, saying: “The drill will definitely provoke Pyongyang more… If South Korea really wants no war on the Korean Peninsula, it should try to stop this military exercise.”

Three days after the exercises started there has been no vitriolic rhetoric from the North Korean leader, leading Trump to suggest that “something positive” could still come out of the recent exchanges. But the threat of conflict embracing the US, South Korea and Japan, remains and could include the use of chemical, biological and nuclear weapons. This would have horrendous consequences, inflicting casualties and destruction not seen since World War II.

The rapid development of nuclear weapons and delivery systems by North Korea has fundamentally transformed the regional strategic landscape and has ensured that a military option is not feasible, whatever the US’ jingoists might say. Defusing the crisis and engaging with North Korea is the only realistic option on the table.

In this regard, the US and its allies would need to note that, whatever China’s irritations with North Korea and its irascible leader, it will not abandon its ally: China opposes regime change in Pyongyang, since it would not like to see a pro-West administration in that country and, possibly, US troops at its border.

Again, most observers agree that, denuclearisation of North Korea is no longer an option; the most that could be achieved is a nuclear cap-and-freeze arrangement. But this would itself require prolonged and painful negotiations, which would need to overcome the deep mutual distrust and address the core concern of North Korea that relates to the threat it senses from the West to its regime and its sovereign status. Thus, North Korea will insist on cast-iron guarantees relating to its security, including the suspension of the annual military exercises.

Finally, the US would have no option but to deal directly with North Korea, jointly with China. But, for this to happen, the US would need to see China as a genuine partner and coordinate positions with it after long and in-depth discussions, which would involve give-and take on both sides, not just a full endorsement of US positions and interests.

However, it is doubtful that the Trump presidency is ready to replace its characteristic verbosity and brinkmanship with a sophisticated diplomatic effort.