The perils of hyper-nationalism

The armed forces are the very last bastion of the country’s composite identity and its national integrity. 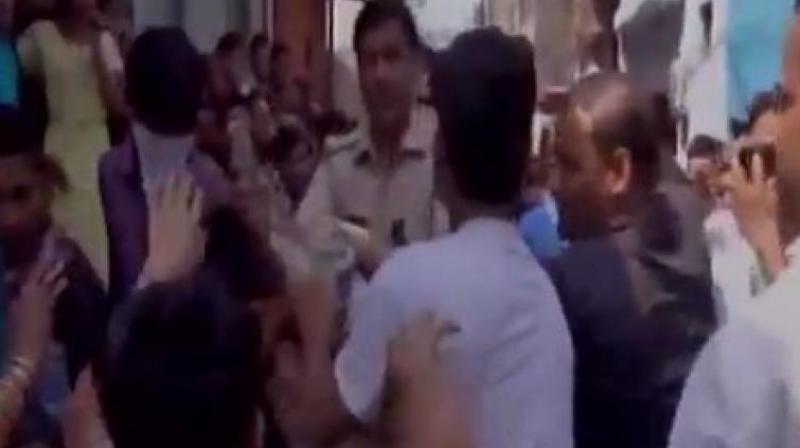 A huge crowd of protesters had converged on the spot after which the cow vigilantes started thrashing those slaughtering the buffalo. (Photo: ANI)

The peremptory “beef ban” imposed on the country has severely polarised Indian society and alienated its minorities. Self-styled “protectors of the faith” from amongst extremist elements in the majority community have organised vigilante groups of “gau rakshaks” (literally “defenders of the cow”) and taken to the streets, setting up illegal check posts to barricade roads and stop vehicles carrying cattle, assaulting the occupants if they happened to be members of the minority community. They were suspected of conveying cattle for purposes of slaughter.

Anyone seen or caught skinning a dead cow was, of course, assaulted and often critically injured or killed. The attackers remained unmindful of the fact that the unpleasant age-old task was performed by persons from the economically-backward classes — both Hindu as well as Muslim, who have lived in harmony.

This has created a dangerous divisive situation in the country, most noticeably in the Hindi-speaking heartland, which, ironically, has also earned the derisive nickname of “the cow belt”. Adding to the current tensions are the traditional groups of “kawariyas”, who undertake annual pilgrimages chanting the name Lord Shiva to offer water at selected Shiva temples — again an age-old tradition, which has often left motorists fuming at the traffic jams it creates.

However, these age-old customs and traditions are now, whether deliberately or unconsciously, ratcheting up communal tensions, contributing to the growth of a divisive and potentially dangerous political environment, which unless firmly checked and controlled can become dangerous for national security.

In the ultimate nightmare, a “Dr Strangelove” type contingency may contaminate police, paramilitary forces and even the ultimate “Bharat rakshaks”, the defence forces. An environment has been allowed to build up which has to be reined in with a firm hand before the social and cultural fabric of the country is permanently damaged. The political class must understand that it is never too early to dismount the tiger.

But of what is something of even more critical concern is the possibility of the pernicious beef controversy drip-feeding into the armed forces. The armed forces are the very last bastion of the country’s composite identity and its national integrity. The Indian soldier today, whether an officer or a jawan, is a reasonably intelligent and educated young man of any religious persuasion, coming from any part of the country and speaking a variety of languages.

Historically, in a duel-prone pre-Victorian Army, the British had first enforced an internal diktat which prohibited the discussion of politics, women and professional matters (disdainfully categorised as “shop”) in officers mess during long, hot and stupefyingly boring “dinner nights”, especially in India.

And with good reason because coupled with a traditionally heavy intake of alcohol these were the issues on which “officers and gentlemen” were most likely to fall out, find themselves “choosing their weapons” and facing each other, usually at dawn.

In their colonial wisdom, the British in India maintained the same customs and traditions in the Indian Army. This used to be the norm in the Indian Army post-Independence. But times have changed, particularly now. With 24x7 media coverage, the “gau rakshak” phenomenon and its attendant high-pitched rhetoric has infiltrated officers’ mess, clubs of non-commissioned officers and regimental cookhouses in military bases and, most significantly, military households.

It is an extremely dangerous situation, because it directly or indirectly sets up the armed forces as targets for hostile psychological warfare by adversarial intelligence agencies, to attempt infiltration of our armed forces, to try and provoke disaffection within the Army, specially targeting soldiers from minority communities. After all, one of the triggers for the Sepoy Mutiny of 1857 by troops of the East India Company were the rumours of cartridges required to be greased with animal fat, which went against religious faith and beliefs of the troops which were required to handle them.

Let the Vishwa Hindu Parishad and the Rashtriya Swayamsevak Sangh put their money where their mouth is. Let them take the religious frenzy of gau rakshaks away from Ram Janmabhoomi, and wanton assault and killing of innocent passersby who happen to be from the minority community.

Can the RSS-Vishwa Hindu Parishad, usually so vocal in propagating the idea of Hindu rashtra, turn their energies towards creation of Hindu suicide bombers from the assorted gau rakshaks, Hindu sena and vahinis strutting about inside the safe confines of the Indian state?

If willing material is indeed available inside India, personnel and training facilities should not be a problem. That is if these gau rakshas are indeed serious to practice what they preach, but not within the safety of India.

These fidayeens could give the Pakistan Army a dose of their own medicine. The Pakistan Army and their terrorist subsidiaries must not be allowed to sleep in peace at their homes. There’s immense potential, but can the RSS and VHP do it? As the Americans say: “Put up, or shut up!”