Military historians see this as one of the greatest battles of the 20th century and a defining moment in the history of Asia. 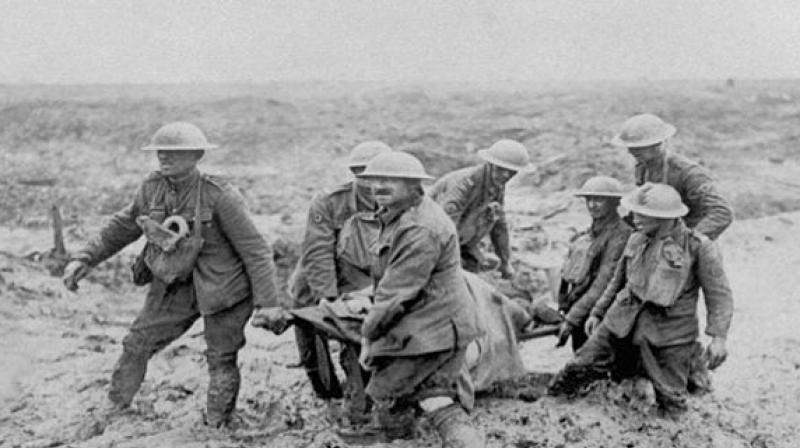 Russia never recovered from this loss and it took it 40 long years to assert its military power once again when it defeated Nazi Germany in the greatest military offensive of the Second World War. (Representational image)

This is now expected to be Asia’s century, with the balance of world GDP shifting towards it. It now accounts for about a third of it, and is forecast to be over half of it by 2050. In 1950, it was less than five per cent of world GDP. With economic output comes geo-political weight. This change is recorded by defining moments in history.

Asia’s first defining moment was when on May 14, 1905, a Japanese naval flotilla commanded by Adm. Togo Heihachiro, with his flag on the brand-new Mikasa battleship, destroyed the Russian armada led by Adm. Rozhestvensky and destroyed 35 of the 38 Russian warships. Adm. Rozhestvensky himself was rescued from his burning battleship Prince Suvorov and taken by the Japanese to Sasebo. This is considered the first time an Asian nation had defeated an European power.

But strictly speaking it is not quite true. The previous year the Japanese had attacked the Russian fleet at Port Arthur and in the engagement the Russians lost several warships, including the battleship Petropavlovsk with Adm. Stepan Makarov, Russia’s most charismatic admiral. It was to avenge this loss that Tsarist Russia had assembled a mighty armada to teach the Japanese a lesson. Russia never recovered from this loss and it took it 40 long years to assert its military power once again when it defeated Nazi Germany in the greatest military offensive of the Second World War.

Another great defining moment was when France was defeated in 1954 at Dien Bien Phu by the Vietminh forces led in battle by Gen. Van Tien Dung. Few military leaders have made such a profound impact on history. Van Tien Dung defined the spirit of a nation and its will to transform itself. Dung was possibly the greatest military commander of the last century, but he was Vietnamese and history will not be as generous to him as it is to Western commanders who achieved far less.

In his own country he deferred to his superior, the legendary Vo Nguyen Giap, who was the Vietminh’s leader and later the North Vietnam Army’s commander-in-chief and defence minister. Giap is generally credited with the NVA’s historic victory over the French at Dien Bien Phu in 1954. But it was Dung who, as Giap’s deputy, planned and commanded the assault on the French garrison and in the process humbled two famous French generals, Christian de Castries and Henri Navarre.

Military historians see this as one of the greatest battles of the 20th century and a defining moment in the history of Asia. The 16,000-strong French garrison made up of battle-hardened troops drawn from the French Foreign Legion and North African regiments were grouped into strongpoints named after various de Castries mistresses. The attack began on March 7 and the French capitulated on May 7, falling to tactics described by Giap as “combined nibbling and attack”. Bernard Fall has vividly narrated the drama of this battle in Hell in a Very Small Place, a classic piece of military writing if there ever was one. It signified the end of the era of European colonialism, just as India’s independence signified its beginning.

But Dung’s greatest battles were yet to come. In the spring of 1975 he led the final offensive against the South Vietnam Army that led to the pell-mell flight of the Americans from Saigon and then the reunification of Vietnam. The final assault consisted of over 800,000 troops with tanks and jet fighters and the US-trained and armed South Vietnamese Army just collapsed in the face of the firestorm unleashed by Dung. We may never again see such a massive, furious and relentless campaign. The last American out scrambling atop the last Huey helicopter was John Gunther Dean, who later became the US ambassador in New Delhi and used to strut around as if he were some latter-day viceroy.

No Douglas MacArthur, no George Patton, no Bernard Montgomery or for that matter not even a Zhukhov or Chuikov can claim a record near as good as that. But they didn’t fight 30-year wars either! A leading Indian news magazine once described an Indian general, in a memorable use of clanging metaphors, as having the dash of a Guderian, the strategic genius of a Rommel and the leadership qualities of a MacArthur etc — all to describe a man who took the Indian Army into the Golden Temple and then later into Sri Lanka! They had obviously not heard of Van Tien Dung.

American military historian Eugene Grayson places Van Tien Dung as among “the great captains” of warfare, with Wellington and Rommel. Great praise that, and Grayson should know. He served in Vietnam and was scarred for life by the lash of Dung’s strategic and tactical genius and the ferocity and fighting abilities of the army he commanded. This army fought without air cover, without any worthwhile artillery and was pure infantry fighting man to man with automatic rifles. The legend of the AK-47 began in the rice paddies of Vietnam. Every round of ammunition, every grain of rice and every bandage was carried by streaming lines of porters carrying head loads for hundreds of kilometres walking in the darkness of the night and under the deep canopy of the tropical jungles.

His genius for innovation is best illustrated by the way in which field artillery pieces were dismantled into small pieces and carted up the hills around Dien Bien Phu and put together once again to rain down havoc of the French positions. Dien Bien Phu was chosen because French generals had decided that the hills were impenetrable and that there could never be any danger from artillery on them. How wrong they were?

The Americans have one great quality, and that is that they are generous to their vanquishers. They recognise greatness. When Dung died, every major US newspaper paid rich tributes to him. Today Van Tien Dung is required reading in all US military academies. They study each and every battle waged by him over and again. Dung was a self-taught strategic genius who didn’t go to academies at either West Point or Sandhurst, or even Frunze. He was a schoolteacher who was picked by the great Vo Nguyen Giap who saw in him outstanding leadership qualities, which is what great generalship is all about.

When Konosuke Matsushita wanted to avenge Japan’s defeat in the Second World War, he built a great enterprise that wiped out the US electronics industry. “What happened to us must never happen again. We must never fall behind again,” he would tell his countrymen. Matsushita’s first US acquisition was the well-known US television manufacturer Zenith, and the first thing Matsushita did was to shut it down. Akio Morita followed in his footsteps and so did Toyota, Honda, Nissan and others. The Japanese resurgence owes as much to the notion it has of itself, a sense of manifest destiny they call unmei korutai, and the national determination to realise that notion. This notion has spread across all of Asia, with South Asia being the only exception. We are truly exceptional. We do not read history, and when we do we often misread it.