Does Tamil identity start and end with Tamil pride?

The Jallikattu protests brought to surface the several undercurrents that were thought to be long-forgotten in Tamil Nadu. 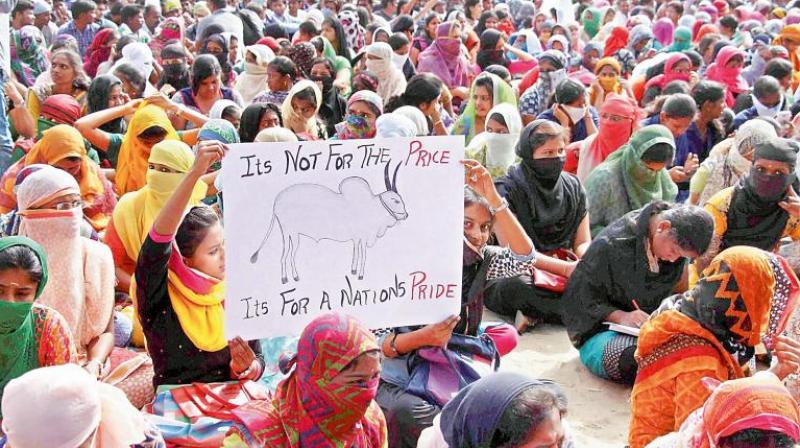 Through January, protesters gathered in huge numbers at Chennai’s Marina beach demanding that jallikattu — the sport that displays the virulent masculinity of the Tamil male — be made legal.

Through January, protesters gathered in huge numbers at Chennai’s Marina beach demanding that jallikattu — the sport that displays the virulent masculinity of the Tamil male — be made legal. While jallikattu was the demand which brought the protesters together, what kept them glued was the underlying feeling: Tamil Pride. Not long after they began, the protests became a rallying point for expressing the disgruntlement of the Tamil people on a gamut of issues ranging from Tamil Eelam to Cauvery river-water-sharing.

As reported in the media, the posters made it evident that seemingly couched in the calls for ‘justice’ was the politics of Tamil identity. The wounds of Tamil Eelam have not healed just yet. Several posters of slain LTTE chief Prabhakaran were seen. Fishermen spoke about the killings and torture of Tamil fishermen at the hands of Sri Lankan forces. The grammar of the protests and choice of black clothing too reminded one of the early days of the Dravidian movement. In 1945, Periyar had formed the ‘black shirt army’ as a part of his anti-Brahmin movement and it had undercurrents of anti-Indian-nationalism too. But it had lost its focus until the anti-Hindi agitation coalesced the issue once more into a Tamil protest.

But does this really mean that Tamil nationalism is alive and kicking? Were the jallikattu protests about Tamil identity? While the feeling of Tamil pride still exists, and it does have the potency to consolidate people across the state, the idea of Tamil nationalism itself has been dragged down to a caricature. The crowd at Marina was nothing like the smaller but livid crowds in 2009 that called for an end of the war in Sri Lanka. There were several groups which tried to convert the jallikattu protest into an issue of Tamil sub-nationalism, but eventually, the sloganeering was rooted in Tamil pride and identity. But most of it was just that — sloganeering. For a bunch who were angry with a host of things, from jallikattu to demonetisation, the Tamil identity became a device to vent it all out.

It remained a mere device, as the real reasons that brought people together was the fury against the Centre. Tamil Nadu has never entirely liked the nature of its relationship with the Indian state. The progressive Tamil doesn’t like that she or he has to choose between ‘national’ parties every five years. But what these emotions have now come to represent is the disappointment with the Centre due to its failure in ensuring federalism. It is evident from the fact that while most protesters mouthed platitudes on Tamil pride and nationalism, any conversation ahead would shift to the disgruntlement with politics, at the State and the Centre.

Further, it is arguably wrong to frame jallikattu as an issue of ‘Tamil pride’, as it inevitably leads to chauvinism and is invariably linked to caste pride. Unfortunately, even if the core feeling of Tamil Nationalism is diluting, the dangers of chauvinism and caste-pride exist. In fact, one of the ways the continued oppression of Dalits is masked is through Tamil identity politics.

This doesn’t mean however that Tamil identity is now an ineffective political tool to raise passions. It remains the easiest way for Tamil politicians to articulate their disenchantment with the Indian state. But in diluting the nature of it and how superficially such identity politics is being employed, there is hope that Tamil identity and sub-nationalism is not necessarily the only counter to nationalism. There is always the hope that the only way in which individual rights can be more effective does not lie in identity politics.

The writer is one of the founders of the digital newspaper, The News Minute