Culture & the Raj: A look back

Rudyard’s fame has overshadowed the career and contribution of his father, so the exhibition is a welcome reminder. 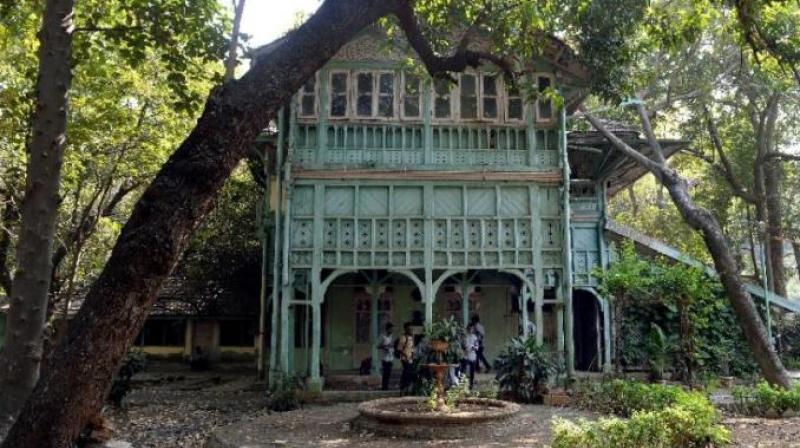 The "Kipling Bungalow" is one of several mansions in Mumbai, once associated with famous residents but now in ruin. (Photo: AFP)

“The medium was the message
Now the massage is the
medium
A mystery and a presage
Of hours of hope and tedium
Of ways that needed mending
Of the elusive happy ending.”
From Tambu Mey Gabhrahat by Bachchoo

Hamlet said conscience makes cowards of us all. Historians and people who call themselves “cultural critics” wrestle with their consciences when they weigh up the reputations of the personages who explored the cultures of their imperial subjects. Some will certainly substitute my “explored” for their “exploited”.

The past few decades have bred a scholarship of anti-imperialism. Edward Said of Lebanon and then Columbia University in the US seemed to have missed the irony of his sitting in the heart of contemporary cultural hegemony (“everything good in America/Ok by me in America!”) and pronouncing in text after text against the scholars and explorers of “native” cultures in the imperialist age. He called them “orientalists” and pronounced that they had, by translating almost lost documents of oriental religions and cultures and making them accessible to the contemporary world, assisted the oppressive, colonial enterprise.

It’s a smug theory, born of the American conviction that European colonialism and scholarship in the East was evil — far more evil than the imposition of inane American pop music, lying cowboy myths and what its critics have called Coca-Colonisation on the ex-colonial world.

Said and his disciples have been comprehensively challenged, proved to be talking historically-biased nonsense in abstruse prose and jargon which is more difficult to understand than to challenge. Their lexicon earns professorial salaries but takes the study of international culture into very recondite purdah.

Ok! — got that festering abuse off my chest because this week I visited in London the Victoria and Albert Museum’s exhibition of the life and work of John Lockwood Kipling. After an apprenticeship in the Arts and Crafts Movement of the 19th century Kipling moved to imperial India with his wife in 1865. Soon after their son Rudyard Kipling was born in Bombay.

Rudyard’s fame has overshadowed the career and contribution of his father, so the exhibition is a welcome reminder.

His first project in India was an attempt at bringing the traditional designs of skilled Indian craftsmen to the manufacture of textiles. His initiation through the Arts and Crafts Movement, whose creative current was opposed to the bland uniformity that industrialisation and mass-production were imposing on the daily environment, impelled him to champion the Indian craftsman.

Kipling was appointed principal of the Jamshedji Jeejeebhoy School of Art in Bombay and he proceeded to get his students to design the decorations for the new buildings of the time. His students designed the reliefs and the sculpted heads and the courtyard fountain that adorn the exterior and interior of Crawford, now renamed Mahatma Phule Market.

The V&A exhibition’s section on Kipling’s period in Bombay has a filmed montage of images, among them the Raj buildings and monuments of that era. Views of Victoria Railway Station, now Chhatrapati Shivaji Terminus, of Rajabai tower, of the first university buildings, of Churchgate station, of the law courts and even of the Taj Hotel are featured. The exhibition doesn’t tell us whether Lockwood Kipling had anything to do with the design and construction of these — which leads me to conclude that apart from stylistic inspiration he had little or nothing to do with them.

After his work in Bombay Kipling was appointed the curator of the museum in Lahore and the principal of its Arts College. In the Lahore phase Kipling’s tastes and endeavours turn to Mughal arts, crafts, designs and architecture. As curator of the museum and tutor of the college he sets out to preserve and develop in his students the artistic vision of northern India.

His drawings at the time include exquisite portrayals of Muslims at prayer, of a bazaar barber at work and a series of pen, pencil and paper drawings of craftsmen of North India at work. The Lahore section demonstrates Lockwood Kipling’s dedication to and humility before the traditions of Indian crafts, from the architecture of Mughal buildings to the minutiae of the design of screens.

After Lahore, by the time Lockwood Kipling and his wife Alice McDonald returned to England their son Rudyard was a famous writer and poet. He was widely acclaimed as the principal writer of the Raj, not only the chronicler of the foibles and betrayals of the British in India but a writer who first gave shape in literature to the life of the “forbidden cities”, the native quarters of Hindu and Muslim communities where only the intrepid British wouldn’t fear to tread.

Rudyard began to write for journals in India and subsequently on his return to England used his few years of Indian experience, in his teens and early twenties, to write his immortal stories and books. His father collaborates with Rudyard to illustrate the books. One of these designs for a cover or bookplate of Rudyard’s “Ex Libris” combines, in the caparison of an elephant standing in a decorated palatial doorway, the patterns and artistic conceits Lockwood brought with him from India. The figure of Rudyard is seated in the howda on top, reading a book and smoking a hookah, which a servant sitting on the rump of the animal holds.

Yes, it does show an Englishman with two native servants, and yes, the design of the whole is a copy of the traditional designs, architecture and natural depictions of the Indian arts and crafts Lockwood encountered and worked with.

It is possible that the Orientalist school of condemnation would label Lockwood Kipling and others who championed or steeped themselves in the cultures of the empire as exploitative lackeys of imperialism. For my part I would exchange all their condemnatory jargon for a couple of sketches by John Lockwood Kipling.