Moon served as a respected human rights lawyer in the difficult days of authoritarian rule in the 1980s. 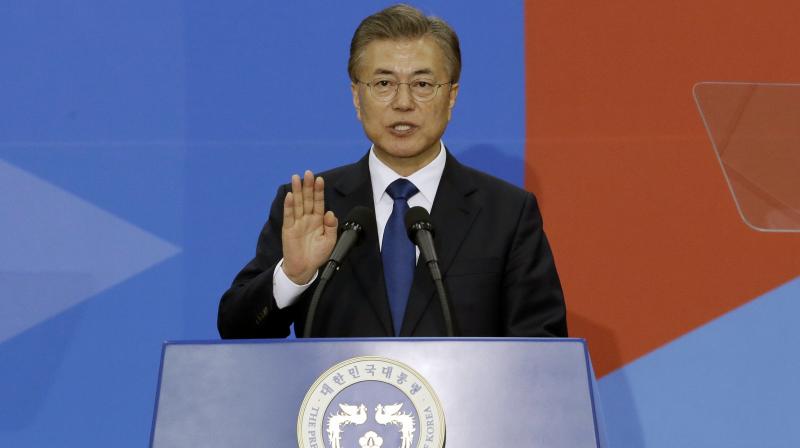 The train of events in South Korea that led to the impeachment of President Park Geun-hye came to a denouement on May 9 with the election of a new President. The consistent frontrunner in the race and eventual winner was left- leaning Democratic Party of Korea’s candidate Moon Jae-in. He led in all the opinion polls and finally received 41.1 per cent of the votes.

The other two serious candidates were Ahn Cheol-soo of the centrist People's Party, who secured 21.4 per cent votes, and Hong Joon-pyo of the ultra-conservative Liberty Party, who received 25.5 per cent votes.

Mr Moon, 64, is a person of resolute will and principles. During military service in 1976, he was involved in a daring commando operation in the demilitarised zone between North and South Korea. He served as a respected human rights lawyer in the difficult days of authoritarian rule in the 1980s. He was chief of staff of late liberal President Roh Moo-hyun and has rich experience in dealing with complex governance issues. In 2012, Mr Moon had lost the presidential race to Ms Park with a narrow margin of 48 per cent against 51 per cent. In the presidential campaign, Mr Moon presented himself as a champion of democracy and an advocate of a fair and just society. His campaign slogan was:  “A reliable President to build a decent nation”.

The rightists were on a sticky wicket in the presidential election due to the impeachment of President Park Geun-hye and the anti-incumbency factor, as her predecessor Lee Myung-bak too was from the rightist Saenuri Party. In the South Korean polity, voters in the 50-plus age range tend to be more conservative and the young and middle-aged incline to be more liberal in their social, economic and political beliefs.

In the second place came 62-year-old Hong Joon-pyo of the Liberty Korea Party, who represented the hard conservative section of the South Korean polity. He was governor of the industrialised South Gyeongsang province and has been a tough public prosecutor. Mr Hong promised a hard line towards North Korea, revival of death penalty and a crackdown on trade union leaders who he had accused of shackling the economy. He was clearly out of touch with the public sentiment.

In the third place was a relatively recent entrant to politics: 55-year-old Ahn Cheol-soo, who has been a successful doctor and software entrepreneur. He founded the People’s Party earlier this year after breaking away from the Democratic Party of Korea, once he realised that he was unlikely to be its presidential candidate. It was a bitter parting as in the 2012 elections, Mr Ahn had withdrawn in favour of Moon Jae-in so as not to split the liberal vote.

Prior to the election, Time magazine had correctly predicted that Mr Moon would be the next President of South Korea and put him on its cover in the week preceding the election. In his interview to the magazine, candidate Moon said that his destiny was to bring the two Koreas together after seven decades of being apart. This goal reflects the dream of his mentor former President Roh Moo-hyun, who tried his utmost for reconciliation with the North. He continued the “Sunshine Policy” of President Kim Dae-jung and had a summit meeting with then North Korean supremo Kim Jong-il in October 2007. After the election, Mr Roh said that he was open to visiting North Korea under the “right conditions”.

With the latest missile test on Sunday, Kim Jong-un has signalled that North Korea would press on with its policy of defying the UN Security Council and the United States. President Roh Moo-hyun condemned the launch as a “provocation” and said that dialogue was “only possible when the North shows a change in attitude”.

What is still likely is that after a complete failure of the “trust politik” of President Park Geun-hye and a policy based on strict reciprocity followed by President Lee Myung-bak, South Korea may again embark on a policy of unilateral concessions to the North. During the last two conservative presidencies there was a virtual freeze on any credible direct contact between the two Koreas. In its recent remarks, the North Korean official media has favoured a return to the earlier era of communication and cooperation followed by the two left-leaning Presidents during 1998-2007.

In his Time interview candidate Mr Moon had also referred to the rushed installation of the THAAD anti-missile system on South Korean soil. Reflecting the widespread liberal sentiment, he said: “It is not desirable for the (transitional) South Korean government to deploy THAAD hastily at this politically sensitive time with the presidential election approaching and without going through the democratic process, and environmental assessment or a public hearing (emphasis added).”

In his inaugural address, President Moon Jae-in declared that he would “strengthen the South Korea-US alliance while seriously negotiating with the US and China to resolve the THAAD” issue. In his telephone conversation with President Xi Jinping, President Moon Jae-in reportedly said that the “THAAD issue can be resolved when there is no further provocation by North Korea” and added that “the resolution of the North Korean nuclear issue must be comprehensive and sequential with pressure and sanctions used in parallel with negotiations.”

President Moon has inherited a rocky relationship with Japan, which would need to be repaired. He took the first significant step by having a telephonic talk with Prime Minister Shinzo Abe after taking office. The left-of-centre President Moon is expected to walk a fine line between South Korea’s traditional security provider, the US, and the new giant in the neighbourhood, China. Both Mr Donald Trump and Mr Xi Jinping have invited Mr Jae-in for early summits. Reportedly, President Moon Jae-in will first send special envoys to Washington, Beijing and Tokyo to kickstart serious diplomatic contacts that have been in limbo since President Park Geun-hye came under a cloud.

The immediate foreign policy challenge for the new South Korean President would be to forge a relationship of openness and trust with the Trump administration so that South Korea does not remain a mere pawn in the high stakes contest between the US and North Korea. Because what President Trump is gambling with is the very survival of Seoul.

For India, the election of the new President is good news. India-ROK relations had got a qualitative boost after the 2004 visit of President Roh Moo-hyun to India. Mr Moon was President Roh Moo-hyun's chief of staff and is likely to continue on the road to consolidate the “special strategic partnership” between the third and fourth largest economies of Asia.