This week’s big news revolved around a documentary on the life of Nobel laureate Amartya Sen. 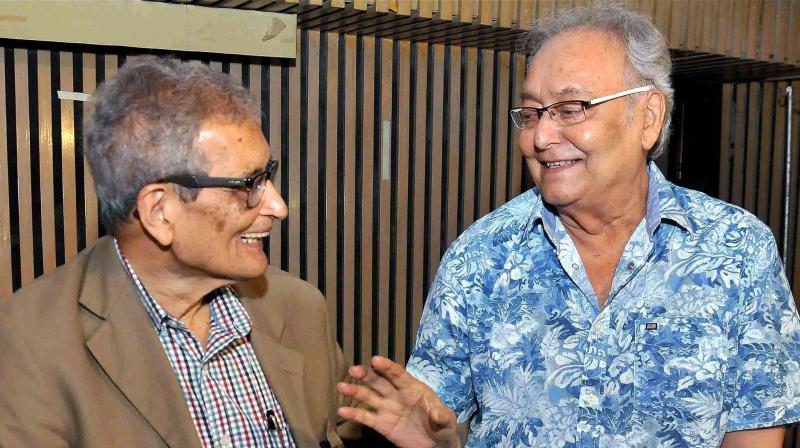 Which world are we living in? Don’t tell me — I know! A world in which words like “Hindu”, “cow”, “Gujarat”, “Hindu India” and “Hindutva” are considered potentially dangerous and incendiary.

This week’s big news revolved around a documentary on the life of Nobel laureate Amartya Sen. The one-hour long documentary made by filmmaker and economist Suman Ghosh, which was to release on July 14, has come up against censorship issues with the Central Board of Film Certification asking for these words to be “muted” before a certificate to screen it can be issued.

While Mr Ghosh has taken a stand by refusing to mute those words, Mr Sen is sensibly staying out of the debate, pointing out that he is after all, the subject of the documentary and not the director. Mr Sen did however remark that the CBFC’s actions were a reflection of the overall mood in the country. “The regime wants to use such bodies (CBFC) that are bodies of the State rather than the government, to act in the interest of the ruling party. It tells you about the way democracy is being interpreted...”

Mr Sen merely underlined something pretty obvious — today, India is indeed “interpreting” democracy! What is there to interpret? A democracy is a democracy — no strings attached.

Apparently, there are a lot of interpretations afoot. As of now, we know who has assumed the role of Chief Interpreter. Every regime plays the very same game. And this is as good a time as any to say it out loud: Forget interpretation; try introspection. What is the big difference between Indira Gandhi’s autocratic and authoritarian ways and Narendra Modi’s approach to administration? Like in Mrs G’s time, is anybody else’s voice heard? Does anybody else’s voice count? Like Mrs G had her obedient minions, so does the Big Mo.

Talking to a very clever bureaucrat recently, I was disappointed to note his cynicism. Since he was the son of a bureaucrat himself, I asked him if his experiences with minister log were qualitatively different from his father’s? He laughed and said: “My dad followed Indira G’s diktats, and my batch follows Modi’s. You cannot win against the system.” At least he was being honest.

In such a stifling atmosphere, why does an hour-long documentary on a highly-admired public intellectual cause such a flutter? Assuming Mr Sen has been scathing in his criticism of Narendra Modi’s government, and in particular, his demonetisation programme, so what?

Dr Sen’s views are widely known and in the public domain. He is entitled to them. By asking for certain sensitive words to be muted from his narrative, is to a) ask for trouble (I mean, you are taking on the mighty Amartya Sen), and b) it can lead to the controversy becoming a global cause célèbre. Had the overzealous CBFC board members from Kolkata, let this go, chances are the documentary would have been watched by a bunch of Sen-admirers and perhaps ignored by public at large. This is where a shrewd administration often goofs up. They bring on the heavies and bullies to do their dirty work, and in the bargain, lose perspective.

India is a highly argumentative country with billion-plus citizens who are more than happy to jump in and offer opinions on anything and everything. We argue because we have nothing better to do. We argue because we like the sound of our own voices. Most of the time, these arguments remain harmless and fall into the “timepass” category. We all fancy ourselves as experts on subjects we may know next to nothing about. That’s the fun of being Indian. That’s the fun of living in a democracy.

A confident democracy does not fear words, or its citizens. By creating a culture of paranoia and censorship, the government is being shortsighted and highlighting its own insecurities.

The most dreaded word right now is “cow”. Ever since the cow mania went out of control, I have started avoiding cows. This is pretty difficult, given that cows are just about everywhere in India — yes, even in a crazy metropolis like Mumbai. The other evening, just as I was about to step into a high-tech store dealing in electronics, which is located right next to a Starbucks, I ran straight into a particularly well-fed cow, which was blocking the entrance. In earlier times, I would have absently shooed her away by waving my handbag in her face.

This time, I nimbly got out of her way, pretending I hadn’t noticed her. Imagine my fate had I used my handbag! There are vigilant gau rakshaks lurking around everywhere — I could have been lynched!

The same night, I ran into filmmaker Madhur Bhandarkar. Even though he is a self-declared BJP supporter, he is also facing CBFC problems with his latest movie Indu Sarkar. The board has asked him to delete 14 key words. Words like PM and CM. He has also been asked to drop Kishore Kumar’s name from the script. “ Call him Kumar...” he was instructed. Mr Bhandarkar, being on the right side of the current administration, is sure to come out of this unscathed. His movie deals with Emergency, and is perfectly timed. But if even he has to deal with censorship issues, one can only imagine the fate that awaits those who are identified as “Libtards” and dubbed “anti-nationals” by mobs.

As for me, I have made a major dietary and lifestyle shift: I have switched to “shuddh” organic cow ghee as a cooking medium. I also use it as a moisturiser and makeup remover. My skin is glowing, and the food at home is aromatic and delicious. Ever tried double fried eggs soaked in cow ghee? Check with me after a couple of months. I may resemble a cow myself. But at least, my skin will look amazing. I may soon progress to using cow dung products.

But I am drawing the line at drinking cow urine — no matter how attractively it is bottled and marketed. See, I have boldly and brazenly used the troublesome word “cow” a multiple number of times in this piece...who knows? In future, I may be ordered to use asterisks.