Opinion   Oped  15 Apr 2020  Fake news in the age of coronavirus is a flirtation with utter chaos
Opinion, Oped

And yet, Supreme Court guidelines to prevent and punish mob violence remain in the books, unimplemented 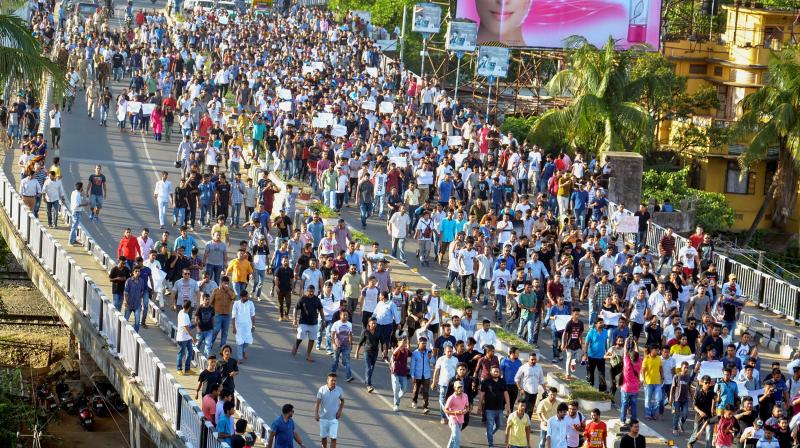 A massive protest in Assam against mob violence in 2018. (PTI)

On March 13, the Union Health Ministry declared that COVID-19 is not a health emergency. So a large number of Muslims travelled together from Delhi to Bhopal, Madhya Pradesh, to take part in a religious congregation there.

On the return trip to Delhi, one young man, Mehboob Ali, came under the suspicion, without any evidence, of not only being a carrier of COVID-19 but also a ‘bioterrorist’ out to spread the disease.

In Delhi, the young man was picked up at the Azadpur vegetable market by the authorities and sent for a medical examination. He was then released, clean and healthy.

This incident, however, set off rumours in the young man’s village of Harewali in Bawana district, about him being Covid-infected. When the 22-year-old returned to Harewali, he was set upon by a mob of suspicious, angry and violent vigilantes and beaten to within an inch of his life.

The reasons behind the near lynching of Mehboob Ali were simple: misinformation and fake news.

Several news organisations that published stories on the incident got it wrong. For instance, they reported he was murdered. Mehboob did not die; he was treated for injuries at the LNJP Hospital in Delhi. Similarly, several media outlets paid no heed to the communal aspects of this episode and the potentially explosive consequences it might have triggered.

Many people have demanded an apology from these media houses, and some have obliged. But an apology doesn’t prevent violence or another mob lynching. Only effective and efficient measures would. The Supreme Court has in fact laid out guidelines to prevent, address and punish lynchings and other forms of mob violence. They have been in the books for two years, unimplemented.

This is only one of the hundreds of cases of mob violence we have seen in India. However, it’s an extremely significant one as it is the first instance of mob violence occurring in the context of the coronavirus outbreak, and could have led to public disorder and violence. The need for preparedness to prevent such outcomes is especially urgent considering the widening communal divide. A possible way forward is proper implementation of the safety mechanisms laid out in the judgment delivered by former chief justice of India, Dipak Mishra, in Tehseen Poonawalla v. Union of India, a case relating to lynchings and mob violence.

“Earnest action and concrete steps have to be taken to protect citizens from the recurrent pattern of violence, which cannot be allowed to become the new normal," said Justice Mishra in that judgement.

This ‘new normal’ is evident in the patterns of abuse that have emerged over the past few years. Yet, only a small amount of work has been done despite the Supreme Court’s directions.

Tehseen Poonawalla v. Union of India, which brought the issue of vigilantism to the Supreme Court’s attention, was a case of mob lynching that had typical elements: religious overtones, spread of violent and immoral content and an assault on citizens of India.

Even the lawyers appearing on behalf of the lynch mobs, the solicitor-general appearing for the Union of India; Hemant Wahi, standing counsel for the state of Gujarat; Tapesh Kumar, counsel for the state of Jharkhand and the then chief justice of India made it unequivocally clear that the "Union of India does not support the activities of vigilantes."

In late 2018, the Supreme Court passed the order making it clear that states and their officials, including police officers, have the responsibility to file an FIR immediately after an incident. Paragraph 6 of the verdict imposes a direct and undeniable responsibility on officers to ensure that vigilantes are prevented from taking the law into their own hands again.

Even previous judgements like Pravasi Bhalai Sangathan v. Union of India, and statutory provisions such as Sections 153A, 295 and 295A of the Indian Penal Code have been designed to deal with people who take the law into their own hands, causing violence, disorder, inhumanity, among a number of other social and legal ills.

Supreme Court senior advocate Sanjay Hegde and Supreme Court advocate Anas Tanwir made a number of recommendations to the court and provided certain guidelines. The petitioners and victims felt their recommendations and guidelines were necessary to protect the innocent and prevent instances of violence, harassment and intimidation through vigilantism.

The court’s judgement and the accompanying guidelines are simple:

It is the state government's responsibility to create the position of a 'nodal officer' (of rank not below that of a superintendent of police) who shall act under the advice and directions of the secretary in the home department of the concerned state. This must be done in each district of the state to ensure that there is no violence by people taking matters into their own hands.

A ‘Special Intelligence Task Force’ must also be created to gather information about people or groups of people who intend to threaten, assault and violate the liberties of innocent individuals on 'moral grounds'. This responsibility is especially important since the task force also has the role to find out about intentionally violent and negligent news that is inaccurate and may cause public anger, disorder and more violence.

By August 2018, within three weeks of the judgement, state governments were required to identify districts that had instances of vigilante violence, disturbance and mob lynching in the past five years.

Now where the centre has failed is in the implementation of the order by the nodal officer, who must make efforts to eradicate any hostile environments against any communities or castes that may be targeted. This is clear in a number of recent cases – such as young men like Mehboob.

The judgement reinforces Section 129 of the Code of Criminal Procedure which empowers a police officer to disperse a crowd or mob that they feel may incite violence or a mob lynching.

Part 8 of the order on preventive measures is extremely important since it highlights the importance of constant surveillance and patrolling to ensure that antisocial and violent elements disperse for fear of being caught.

Part 10 of the order fixes responsibility on the central and state governments to ensure that dissemination of information is accurate. It mandates that spreading of false/fake news or misinformation should have serious consequences and made punishable under the law. The judgement reinforces Section 153 of the IPC wherein an FIR has to be filed against persons who spread messages that are likely to be explosive or incite violence.

While writing the order on remedial measures, chief justice Mishra made it clear that it is the responsibility of a police officer to immediately register an FIR whenever there is information that can incite a mob lynching or violence.

Part 4 of the order on remedial measures places responsibility on the state government to create a “victim compensation scheme” through Section 357 of the Code of Criminal Procedure within a month of the judgement. The state must account for all kinds of injury, whether bodily, psychologically, or a loss of earning, including the loss of employment opportunities.

They must also consider expenses related to education and expenses incurred on account of legal and medical expenses. The said compensation scheme must also have a provision for interim relief to be paid to the victim(s) or to the next of kin of the deceased within thirty days of the mob violence.

Lastly Justice Mishra wrote about punitive measures or punishments for offenders. If it is found that a police officer has failed in his responsibility to protect citizens against mob lynching or violence, it shall be treated as an act of deliberate negligence and/or serious misconduct.

Disciplinary action is to be taken in two primary cases:

First, where the officer had prior knowledge and took little or no action to stop the incident of mob violence.

In the second instance, disciplinary action is to be taken when the incident has already taken place, and the officer has not taken appropriate action against the culprits, whether it be arresting them or instituting criminal proceedings against them.

These guidelines are of extreme importance and urgency – we fortunately already have an effective and workable system of laws and provisions to combat class violence and mob lynchings - they just need the proper implementation.