INS Betwa’s tumble: Where does the fault lie?

INS Betwa is a product of GRSE Kolkata and not that of Mazagon Dock. 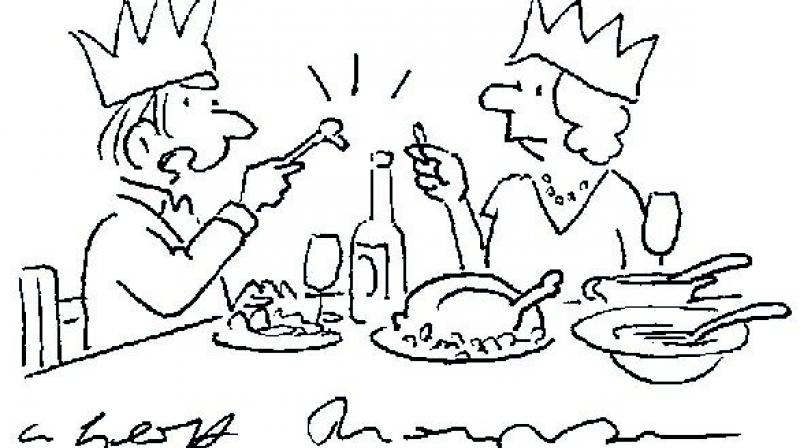 ‘It won’t work — he’s still going to be President’

It took almost 11 years for India’s Garden Reach Shipbuilders & Engineers to build the Brahmaputra-class (Project 16A) full-load (displacement 4,521-tonne) frigate INS Betwa, which was commissioned into the Indian Navy on July 7, 2004. Thereafter, it took more than 12 years for the same ship to tumble (or “tilt-sink”) in a Mumbai dry dock, killing and wounding sailors. Nothing perhaps could be more demoralising for naval personnel.

I was witness to the commissioning of INS Betwa with fanfare at GRSE, Kolkata. But it is time for course-correction, rather than bickering past follies, failures and mistakes. The Indian Navy belongs to the nation and not to a handful of people. Indians have every right to analyse and give suggestions.

Thus, its boilers and turbines are from Bhopal, radars made by Bharat Electronics and fire control systems, sonars, combat data system are also of Indian origin. Nevertheless, all three frigates witnessed time and cost overruns before being commissioned which, in turn, did affect the desired level of operational preparedness. The delay was also a result of post-USSR collapse, resulting in chaos in the combat ship-building enterprise of India.

One referred to INS Betwa’s genealogy to appreciate how difficult and painstaking India’s naval asset indigenisation has been. Further, one needs to appreciate that no country, however friendly it may appear to be, is unlikely to give the latest and the best of naval technology to a developing naval state like India, notwithstanding the sole exception of former USSR’s sustained contribution to the development of the Indian fleet in the past.

Today, no (Western) developed nation is likely to replicate the Indo-Soviet naval cooperation from 1960s to 1990s. The reason being the indigenisation of the Indian Navy is a direct challenge to the established naval technology of the Western world order, thereby resulting in potential loss of employment, economics and engineering edge for the export market. Hence, any help or assistance therefrom can never be either selfless or unconditional. That is understandable. On their part, it has to enter into the Indian machine, market, military and money. In the memorable words of US President Barack Obama, “to pry open the Indian market”.

Now let us come back to the plight of INS Betwa in the Mumbai dry dock. The sinking of INS Betwa is serious as it occurred in a dry dock. Fighting ships sinking in the sea or getting damaged in choppy waters or taking torpedoes and missiles in war are understandable. But sinking in a dry dock during refit and refurbishing is not acceptable.

Brave words like “INS Betwa will be salvaged as per original deadline of 2018” are music to the ears, but before that there is lot to put things into the right perspective. It has to be remembered that INS Betwa is a product of GRSE Kolkata and not that of Mazagon Dock. Hence, doing normal refurbishing a 3,850-tonne frigate in normal times would be entirely different from complete “redoing” a badly mauled machine in an unprecedented mishap with major damage to its vital electronics and other sophisticated machinery.

It may also emerge as equivalent to a virtual new construction — the economics of which may not be commensurate with its restoration cost. Hence, to make highly optimistic statement pertaining to the damaged ship’s restoration and redeployment by 2018 is good for morale but a bit premature before getting detailed reports from/of the competent authority on the damaged boat.

Also, the Brahmaputra-class frigate is no longer in production, as Beas, the last of the class, was commissioned way back in July 11, 2005. In fact, GRSE Kolkata no longer produces any deep seagoing frigate on date as gleaned from Jane’s Fighting Ships 2016-2017. It is now producing only displacement tonne 3,150 full load Kamorta-class multipurpose corvettes, designed to operate in Indian offshore waters.

Thus, things certainly do not look as simple as it is being projected. Bringing foreign experts and professionals and equipment (as Mazagon Dock reportedly does not have the suitable wherewithal to put in place the tilted 3,850 tonne frigate) are all going to cost a fortune to the state exchequer.

Also, Mazagon Dock is now into bigger league. After having completed the Godavari-class frigate in 1988, it has gone heavier and higher, first having manufactured the 6,808-tonne full load displacement destroyer INS Delhi in November 1997.

Although INS Delhi took 10 years to be commissioned, the subsequent 7,292-tonne full load displacement destroyers INS Kolkata, INS Kochi and INS Chennai, too, took between 10 and 11 years to be operational. And that is an unacceptable time and cost overrun if India wants to be in league with the Chinese Navy.

In this scenario, it would be interesting to see and challenging to undertake the fate and future of INS Betwa in light of recent experience of Mazagon Dock’s manufacturing of three 6,299-tonne full load displacement Shivalik-class frigates. Each of the three boats took a minimum of eight years and nine months.

One simply wishes to point out the facts with a sense of urgency. When new ships are taking long to commission, one wonders as to how much time, effort and money will be required to first make a tilted ship stand on its feet, repair, refit, refurbish and put her back to the sea?

Lastly, I wonder why so many recent mishaps are occurring in the Indian fleet? What has gone wrong? Are these really accidents? Or, is there something more than which meets the eye? Is someone compromising India’s national security from within?