Ms Patel could definitely be a potential foreign secretary whenever a new Tory government is in power. 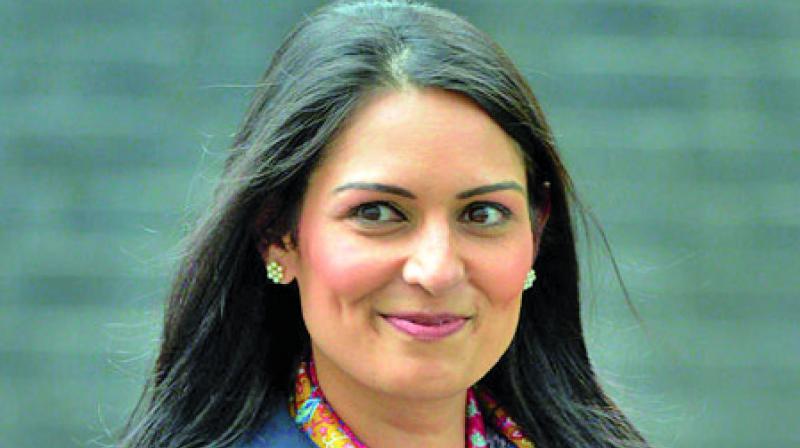 The latest to go is the Indian-origin international development secretary Priti Patel — who has been accused of carrying out a “freelance foreign aid policy” in West Asia, while ostensibly on holiday.

Brexit woes are not the only ones bothering beleaguered Prime Minister Theresa May, as her Cabinet ministers continue to be sacked or “fall on their swords” as is the more romantic (and not always accurate) description. The latest to go is the Indian-origin international development secretary Priti Patel — who has been accused of carrying out a “freelance foreign aid policy” in West Asia, while ostensibly on holiday. We have known Ms Patel for a while — and she is an ambitious, well-spoken and very smart young woman — who will undoubtedly bounce back, once she has done her bit in Coventry.

However, the media tracked every bit of her return to the UK, expecting that she would be sacked on her return trip from Uganda. As the flight back was covered on media — it led to over 20,000 tweets — including some which were quite funny, which said:

Priti Patel walks through “nothing to declare” line

Theresa May: Are you kidding?”

And another tweet which said that she would be literally “duty free” in a short time.

The problem when a leader is perceived to be weak (as is, unfortunately, Ms May) everyone is a little tempted to try for jobs they might aspire to in the future. Ms Patel could definitely be a potential foreign secretary whenever a new Tory government is in power. Who knows? Ms May was also forced to dismiss her defence secretary Sir Michael Fallon over yet another alleged sexual harassment claim — and now we are back to discussing the fate of the irrepressible Boris Johnson, foreign secretary, who has also been making statements, which alas, might have far-reaching consequences.

So far he remains “unsackable”. However, now a statement he gave might impact the future of Nazanin Zaghari-Ratcliffe who works with the Thomson Reuters Foundation but is now in jail in Iran. She has been allegedly accused of plotting to destabilise the Iranian state, while she says she was there on holiday. Unfortunately, Mr Johnson mentioned that she had been “training journalists” — which might put the young mother under further risk.

It has prompted Jeremy Corbyn (our Prime Minister in waiting?) to ask for the sacking of the “unsackable” Johnson.

Now we only have to see what happens next! This is turning into a game of Russian roulette as the Cabinet falls apart. Christmas has come early for the Labour Party.

Mr Corbyn meanwhile came in for some flack from former Prime Minister Tony Blair — who maintained that the Labour Party should be at least 15 to 20 points ahead of the Tories, given the mess they are in. Some of the latest polls show that the Labour leader has finally pulled a few points ahead of Ms May, but according to critics — that is simply not enough.

This is undoubtedly surprising — but shows that while Mr Corbyn has a “rockstar” appeal for the youth — he has still not been able to entirely convince the majority of voters that he could offer a stable alternative. And stability is something everyone in the country is yearning for.

If this were not bad enough — commemorations such as the Festival of Remembrance at the Royal Albert Hall are also under challenge in the UK (is nothing sacrosanct anymore?) — and that too — from rugby! In the past, these were the moments when the royals led the national commemoration. Everyone wore poppies and remembered the Great War. But now while a “sombre” Queen and Prince Philip pulled out of retirement, attended — as well as Kate Middleton — the two young princes, William and Harry, were away watching rugby… Well, well, well!

Meanwhile — the sexual harassment cases continue to pile up — and fortunately some action is being taken wherever possible. If a minister has been sacked — work is also being taken away from accused celebrities, as it is obvious that anyone vulnerable was game for these alleged predators. Men and women, boys and girls — no one was spared, depending on their sexual orientation.

While in India a court has ruled that a feeble “no” means nothing — cases are tumbling out where even lewd gestures, or suggestive words are being condemned and police investigations have begun. At least 15 alleged victims have come out to accuse Kevin Spacey, who for years had been at the Old Vic, near the Waterloo station, and had been much admired by all for his work at reviving theatre. However, his dark side is now being revealed as men accused Spacey of sexual assault.

Again — it is so shocking that there has been such a conspiracy of silence over all these celebrities. One really wonders — like Priyanka Chopra has hinted — that if stories about Indian misogyny in India begin tumbling out — where will they lead to?

And while it is the season to be jolly — some people are not so impressed with the supermarket Tesco ad. It has got a lot of attention as it shows everyone celebrating Christmas — including Muslims. And yes, don’t worry — there has been a furore here as well. Fortunately, while most are unfazed — some Muslim community members have objected. And because the ad features the “Turkey” selection — some vegetarians have got upset too. The only thing is — no one has (as yet) demonstrated on the streets or asked to ban the ad…