VS Naipaul first book on India was, as he said to me, the product of disillusion. 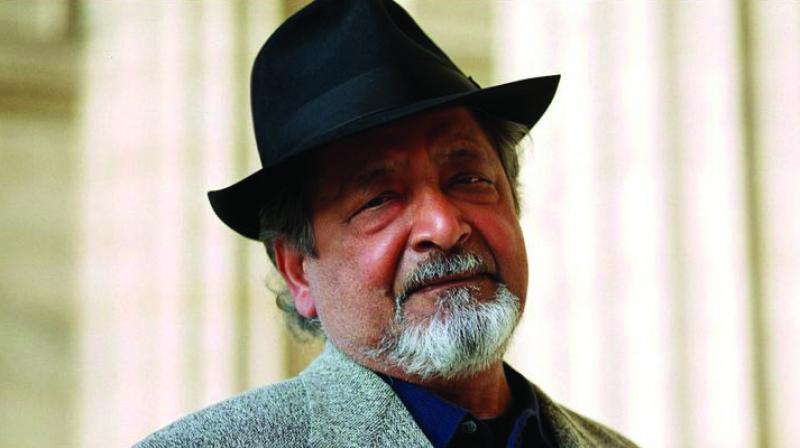 When the Swedish Academy announced it was giving the Nobel Prize for Literature to Sir Vidia Naipaul, I happened to be in India. The BBC rang me up and the researcher at the end of my mobile phone asked if I had a landline. I asked what this was about and she said she wanted to speak to me about my friend V.S. Naipaul. The first thought that occurred was that he was dead.

“What? Why?” I asked, and she calmly said it was because he had won the Nobel Prize. Phew!

She booked me for the programme and I immediately rang Vidia’s Wiltshire home. Nadira, Lady Naipaul, answered the phone and said the place had gone wild with TV crews and reporters from all over the world invading the neat and quiet village of Salterton.

She said he was being serially interviewed, but he’d interrupt these and come to the phone as she was sure he’d like to speak to me. Vidia came on.

“Farrukh, Farrukh, you’ve heard of my little spot of good luck,” he said.

I recall the moment because it was part of Vidia’s modesty, an attribute which is strongly evident in his writing and was, to me, in his personality — though to his detractors, calling V.S. Naipaul “modest” is tantamount to calling Hitler compassionate.

Yes, Vidia didn’t tolerate fools gladly. The definition of “fools” was for him quite wide and he made his dissension from their opinions or points of view quite evident.

His famous novel, A Bend in the River, begins: “The world is what it is…” and Vidia wanted to see it exactly as it was without any fog of ideology, lens of nationalism, distorting mirrors of received opinion or filter of political correctness. Abandoning those mediating media or instruments, he offered himself as a target for ideologues, for the unbalanced nationalists of India, the Caribbean or Africa, for readers and followers of cliched opinion and for the Politicallycorrectwallas (No, that’s not yet a Parsi surname!).

His first book on India was, as he said to me, the product of disillusion. He came to India to acquaint himself with the country of his forefathers and though he was brought up with its religious myths and its nationalist fervour, his writer’s mind was a clean slate. There’s a sense of shock in the book. Observation trumps ideological or nationalist bias. If Indians defecated in the streets and in very many places where he looked, he would say so. If a prominent Indian scientist who could make a nuclear bomb using advanced modern physics in which he believed could also get his daughter married through the pronouncements of her horoscope, he would point out the intellectually schizoid nature of some Indian thinking. If he was the guest of some rich Indian family who had gathered pretentious imitation-Picasso pictures and hung them in their drawing rooms with the conceit of being connoisseurs of art, he would ridicule them. It wasn’t surprising then that the critics of the book called it, in line with other cri
tical, perhaps politically motivated books such as Katherine Mayo’s Mother India, “the gutter inspector’s report”.

I read this first book on India while I was in college in Pune, intrigued by the accuracy and the obdurate insistence on honest observation and comment. I didn’t tell my determinedly nationalist or patriotic friends that this gutter was absolutely necessary to inspect, and perhaps pour some literary disinfectant on. I read it in cowardly agreement.

I met V.S. on a few occasions in London but my first real encounter with him was when the BBC asked me to review his third (or fourth, if you count shorter essays) book, India: A Million Mutinies Now, and interview him. We talked about the possible territory we’d cover and then went on camera. I observed that the judgments in this last book were discernably more positive than those in the first two or three books.

All I could do was to attempt a justification of “giving him marks” by quoting from the books and asking him to agree that a progress was evident. There was in Mutinies a determination to find the seeds of positive social growth through the personal stories of the people he interrogated.

I don’t think he liked that interview and when I asked him to sign the first editions of his books which I had hopefully brought along, he said he’d sign just one — having done which he left the interview room and walked down the pavements to his flat in South Kensington. No small talk.

Years later Nadira and Nancy Sladek, the editor of the Literary Review, showed Vidia that interview which Nancy had recorded, pointing out to him that the interviewer (me) was falling over himself to be positive and meeting with a sullen response.

That was a year or so before I got a call in my office — I was earning my living as a TV bureaucrat at the time — from Gillon Aitken, Vidia’s agent, who said Vidia wanted to have lunch with me. I was a bit astounded and said I didn’t think he liked me.

“That’s all changed,” Gillon said. “You know he’s married Nadira and she is a great fan of your books and your columns in The Asian Age, which she diligently reads and has persuaded him to invite you to lunch.”

The lunch took place and I noticed that while Nadira was very amiable, Vidia remained sullen until I was asked what my latest TV offering on Channel 4 would be. I said I had just returned from Jamaica where my TV crew had recorded the proceedings in a hospital in Kingston.

My story was that one day I and the crew encountered a tall security guard at the gates, who detained us saying we had to record him singing as he was “The Nat King Cole of Jamaica”.

Vidia at last looked curious. I said I had asked the cameraman to switch on and record Jamaica’s King Cole, who began to sing Mona Lisa, Mona Lisa... etc. He was a minute into the song when loud gunshots rang out from somewhere nearby.

We naturally were inclined to duck for cover when Nat said “Don’t mind dem boys, don’t mind dem!” and kept singing even louder to drown the gunshots. We ran into the hospital. Soon the wounded and the dead from that encounter followed us.

I said I wanted to start the series about the Jamaican hospital with that scene. Vidia laughed — and laughed. It was probably Jamaica as he knew it.

It was the beginning of a deep friendship. His death has left a dimension-shaped hole in my short and happy existence.