The Raj & Partition: A relook

Ms Bhutto repeatedly says that the film doesn’t blame the British for Partition. 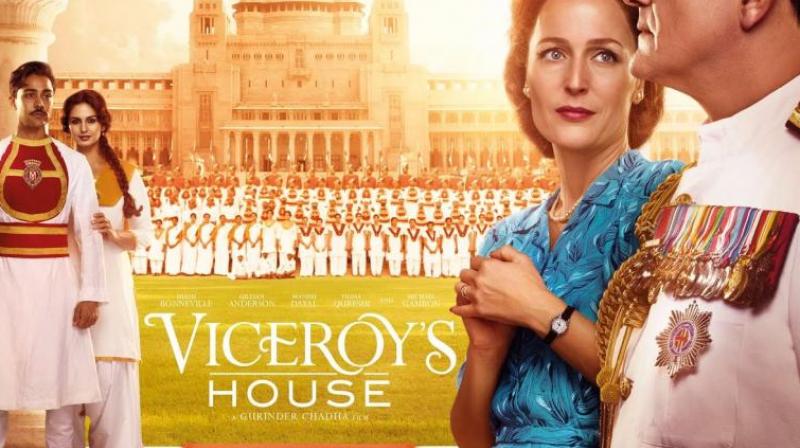 “A grain of dust, a withered flower
Our yesterdays, a passing breeze
The shadow of a silent tower
We only live in memories”
From Palang Polo
by Bachchoo

Gentle reader this is not a review of Brit-Punjabi director Gurinder Chadha’s latest film Viceroy’s House, nor is it a review of the review of it, which appeared in the Guardian last week. To say that it’s a film about the Partition of India is akin to saying that Doctor Zhivago is about the Bolshevik Revolution. The supposedly central story of the film is, as with Yuri and Lara of Dr Zhiv, that of star-crossed lovers: a Muslim girl and a Hindu boy who both work on the staff of this palatial viceregal house (where a Rajasthani palace plausibly stands in for Rashtrapati Bhavan). The film starts with the preparations for and the arrival of “Dickie” Mountbatten, the last Viceroy of the Raj who has come to Delhi with Edwina and his daughter Pamela to dismantle it. He meets the Raj grandees who present their fears and foreboding.

Oh dammit! There is that moving love story but yes, the film is about Partition. If it is seen as such, then it is one of, if not the, best “Partition film” so far; which is not easy to say as I wrote two of the previously-produced ones myself. It features the Viceroy and Vicereine, Nehru, Gandhi, a convincingly played Jinnah, Radcliffe the boundarywallah and the British governors of Punjab and Bengal. It also features a dramatic contention, which my historian friends say they have heard before, but more as conjecture rather than proven fact. More of that later. I had to write all that to get to the point, which is that I normally read reviews to compare my reactions to the words on the page and am not vastly interested in the identity of the reviewers. I saw VH at the unpolished edit stage (Yes! I am friends with Gurinder and one of writers, Paul). Nevertheless the contentious tone and plain “false news” contained in even the first few paragraphs of the three-page Guardian review sent me back to the byline saying “aha!”.

I never write letters to newspapers (I don’t think they pay, do they? Get on with it!- Ed.) but the normally perceptive Guardian compelled a reply. I could do no other. Here’s the letter as emailed to the Guardian, conforming to their 250-word limit:

Fatima Bhutto’s review of Gurinder Chadha’s remarkably moving Viceroy’s House, while roundly condemning British colonialism for a “divide and rule” policy, ironically falls into the same trap, publishing a biased assessment of a Sikh director’s film by a Muslim Pakistani. The article bills the reviewer, a member of the near-royal Bhutto family, as a writer of a memoir and a novelist. This is akin to crediting Edwina Mountbatten as the chief of the Viceroy’s kitchen.

The review seems repeatedly to assume that lines spoken by characters reflect Chadha’s opinions rather than accurate representations of how their historical equivalents may have spoken. (Dear Fatima, Shakespeare probably didn’t, despite Lady Macbeth’s urgings, believe in murdering Scottish kings.)

The events and dialogue of the film are dramatically plausible. Ms Bhutto’s notions of the cruelties of colonialism would make several truthful films but are not the subject of this one. She claims that the film mistakenly lays the blame for Partition at the feet of the Jinnah’s Muslim League. So who else demanded the Partition of India? Contemporary historians correctly attribute the intractable insistence on partition from the League, whose leadership consisted of feudal landlords and petty royalty, to the resolution passed by the Indian National Congress to abolish feudal landholdings when Independence was granted. It was. India was partitioned, Pakistan created and the Bhutto family held on to its feudal holdings in Sind.

The word-limit stopped me saying very many necessary things. Fatima Bhutto is, famously, at loggerheads with the Bhutto-Zardari clan, having virtually accused them of murdering her father, Benazir’s brother, in a Mughalesque fratricidal plot. Perhaps this has made her more, rather than critically, nationalistic. Though one can discern, through sometimes very obscure prose, that Ms Bhutto sides with and seeks to represent all pre-Partition Indians — Hindus, Muslims and Sikhs — against the exploitative Raj, she finds the film constantly vilifying Muslims — you can take the lady out of Pakistan but you can’t take Muslim nationalism out of the lady.

On seeing the finished film again, I find Ms Bhutto’s contentions plain wrong. The film certainly has aggressive Muslim characters but it is even-handed about the violence and the genocide suffered and perpetrated by all three displaced communities. Ms Bhutto repeatedly says that the film doesn’t blame the British for Partition. It’s precisely what the film does, using the contentious theory that Mountbatten and Radcliffe were used as stooges by Churchill, who had drawn up a wartime plan for the Partition of India so as to create a Pakistan which would act a buffer against the Soviet Union and deny Moscow access to the port of Karachi.

Ms Bhutto’s attempt at direct insults would be hurtful if they made sense: “Viceroy’s House betrays the profound inferiority complex that plagues colonised people, a trauma as severe as the physical assaults and violence done to the land and bodies of subjugated people. It is exactly this kind of thinking that infected those who rioted and murdered their compatriots — a sense of fully absorbing the coloniser’s claims of racial, moral and civilisational superiority. How else to explain the damage to the colonised psyche, whose imagination is so deeply corroded that it can believe that white skins are superior to brown skins…” Does she mean all of us sub-continentals? Is this the Guardian’s analysis, or is this amateur psycho-sociology aimed simply at Ms Chadha? The not-quite-pukka word that comes to this colonised mind is “chippy”. The Guardian didn’t publish my letter.