Spare us the moral outrage in the virtual world. Instead, stop being indifferent in the face of injustice in the real world. 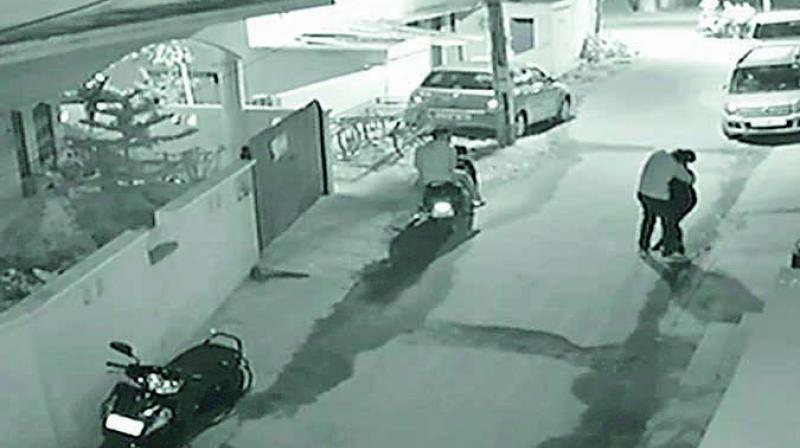 A screengrab of CCTV footage of the Bengaluru molestation case.

In one of the earliest depictions of women as sub-human creatures, Semonides of Amorgos, a 7th century Greek iambic and elegiac poet, created 10 types of women based on different models from the natural world. A dirty woman from a pig, a cunning woman from a weasel or skunk, a virtuous woman from the bee and so on. The poem is one of the earliest texts attesting to the prevailing societal misogyny. An attempt to assert the patriarchal power structures which depended on and constantly reinforced by abuse of women. Nothing much has changed in the past few centuries. Women, the world over, have become victims of this systematic abuse.

Even today, when a girl is violated against her will, our instant response is:

“Dude, look at what she is wearing!”

“Why was she out so late in the night?”

A victim, instead of being offered support, is reduced to a putative enemy. The length of her skirt becomes a grave threat to our convenient moralistic standards. Victim-blaming is nothing but mass insanity instigated by deranged values.

Bengaluru’s mass molestation case presents two kinds of people — the perpetrator and the mute spectator. They stood on opposite sides of an act of violence. And yet their attitudes were uncannily alike. Each portrays the other as someone who sees women as instruments of sexual pleasure, rather than as humans. A dehumanising objectification.

Sexual assault is a scourge, and has been so for many centuries. History is full of such bizarre aberrations, where women are the worst affected. Be it in a political aggression like war or in a conflict-torn region, women are the primary victims. A situation of armed conflict increases a woman’s risk of becoming a victim of sexual violence. They are used as the worst tools of vengeance.

When the tide of World War II finally turned, a torrent of Russian forces poured into Germany from the east, and their inexorable advance became an orgy of rape and murder of hapless women. East Prussia was the first German region visited by the Red Army. In the course of a single night, it killed 72 women and one man. Most of the women were raped, of whom the oldest was 84. A victim, who made it alive, recollected the gripping scene of an eight-year-old girl raped by an entire tank squadron from eight in the evening to nine in the morning.

Honda Katsuichi, in his book The Nanjing Massacre: A Japanese Journalist Confronts Japan’s National Shame, writes of soldiers disemboweling pregnant women and stuffing hand grenades up women’s vaginas and then detonating them. A sergeant confessed in the same book that, because a crying infant disturbed him while he was raping the child’s mother, he took the days-old baby and threw it into boiling water.

There have been numerous instances of wartime sexual violence, particularly during the series of conflicts from 1991 to 1999 in Bosnia, Kosovo and parts of Yugoslavia. There were even reports of “rape camps” during Bosnian war (1992-95). It has been estimated that during the Bosnian war between 20,000 and 50,000 women were raped.

Even now, not a day passes by without hearing gripping tales of Yazidi women used as sex slaves by Islamic State of Iraq and Syria and women in Aleppo choosing suicide over rape. Bodies sold and used liked battlefields.

Closer to home, the December 16, 2012 gangrape in New Delhi is still fresh in our memories. We have failed many Delhi’s daughters since then. While violence of such grave nature attracts huge public sympathy, the daily low-level harassment in public places is simply accepted as a way of life. Suggestive comments, wandering hands on public transport, being stalked and “eve-teased” are largely seen as harmless by a majority of Indians.

In India, “eve-teasing” is more of a euphemism than a crime. Seen as trivial in nature, utterly disregarding its terrible impact on the female psyche. This owes much to our popular cultural beliefs well-founded on tales of gods teasing gopis and our age-defying heroes pursuing fair-skinned heroines onscreen. With or without consent. The mass media is quite instrumental in propagating gender stereotypes, giving legitimacy to the bullying, groping and raping.

Whenever there is a public outcry over an incident of violence against a woman, the response is always on predictable lines. The victim is blamed for leading men on and held responsible for their misfortune. Social psychologist Melvin Lerner argued that the victim-blaming tendencies of society are rooted in the belief that in a just world where actions have predictable consequences, people can control what happens to them.

The vile slurs on attire and conduct raise a question of deep and fundamental importance. What is it that enables one group of men to treat women as mere objects of sexual pleasure? The answer is not hard to come by. The cultural ethos, drawn heavily from patriarchic structures, set the agenda for actions and thinking of women as less than human paves way for the perpetration.

Another pertinent issue is of the “mute spectators” to such acts of violence. It is horrifying to see that, while the mass molestation was happening on that petrifying Bengaluru night, every single soul there chose to merely watch rather than react.

David Hume, a Scottish philosopher, in his 1751 An Enquiry Concerning the Principles of Morals, argued that our moral judgments flow from a psychological faculty he called sympathy.

Our resonance with others evokes feelings of approval or disapproval in us; these feelings are the basis of our moral judgments. Suppose you were to witness a man molesting a woman, and feel a sense of moral outrage welling up. This feeling of moral disapproval is produced by the hurt evoked in you by witnessing the scene. Sadly, we as a nation, have conveniently conditioned ourselves to be silent spectators. Good samaritan is a word alien to us, particularly when a woman is violated right in front of our eyes.

Our sympathies are skewed and unevenly distributed. The odds are that a loved one being victimised evokes vastly more sympathetic concern in us than the fact that hundreds of thousands of women face this right in front of our eyes.

National Crime Records Bureau statistics show that post-Independence rape case reporting has gone up by 900 per cent. Every other day, we hear of gruesome assaults. Some receive more attention depending on the prevailing political climate. What follow is few days of social media activism and cop-bashing, and then the issue is long-forgotten.

Contrary to popular belief, violators are not always monsters of the moment. Violence against women starts before birth. The threat of an intimate abuser looms larger than a chance offender. Tougher laws will certainly do justice, with improved enforcement, but in the absence of social responsibility towards women’s safety, legal enforcement alone can’t protect our women.

We need to be a nation of action, not words. Spare us the moral outrage in the virtual world. Instead, stop being indifferent in the face of injustice in the real world. It’s high time we addressed this cultural crisis. As David Livingstone Smith writes in Less than Human, let us not rid ourselves of the “human ness” in us.

Let us remind ourselves yet again that, the vision of India as Bharat Mata has profound implications for the country. Spiritual essence alone cannot ensure safety on streets. Rise from your couch of denials. Teach your sons to see a woman as a responsibility and not as an opportunity. Give them a gentle nudge in the ribs and ask them to be mindful of the obligation they have towards the safety of a woman, and not the length of her skirt.