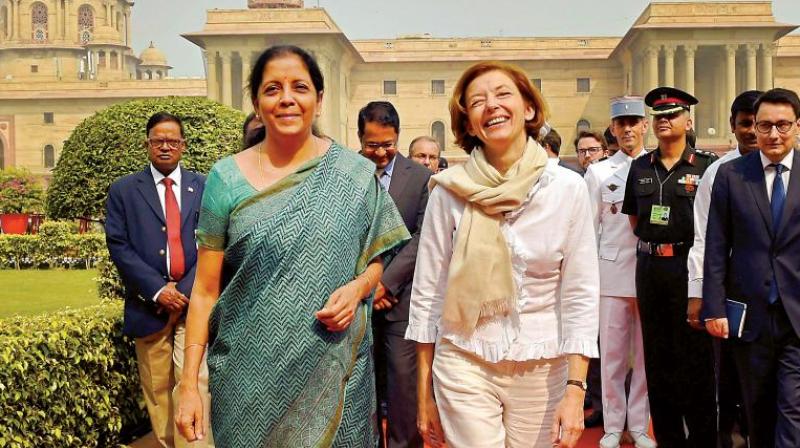 The Narendra Modi government is well aware that it needs to diversify its diplomatic relations if it wants to play a major role in the world. While the Indian media regularly covers the “Look East” or “Act East” vision, which translates into closer contacts with nations like Japan, Vietnam and Australia, “Look and Act West” is often overlooked. Perhaps it’s happening in a more discreet manner, such as in the case of relations with France.

Besides the recent visit of French defence minister Florence Parly and the forthcoming visit of foreign minister Jean-Yves Le Drian (seen as a precursor to the visit of French President Emmanuel Macron to India in the second week of December), the last few weeks have seen important visitors, putting Indo-French ties on a new launchpad towards deeper collaboration in several fields.

In September, the president of the Movement of the Enterprises of France (MEDEF), Pierre Gattaz, visited India. MEDEF is the largest French employers’ federation, representing over 800,000 member-companies. Known as “boss of the bosses” (patron des patrons), Mr Gattaz was accompanied by a 60-member delegation to “help India innovate and create jobs with expertise in infrastructure, renewable energy, waste and water treatment and smart cities”.

The delegation toured New Delhi, Mumbai and Bengaluru, where it met government officials and business groups like Ficci and CII. In Bengaluru, Mr Gattaz asserted: “We want to be in India for the next 30 years and become one of the best partners in India’s development path. India needs the skills and expertise that French businesses can provide. Our objective is to create one million jobs a month in India.”

A few days later, the diplomatic adviser to the French President and the NSA’s counterpart, Philippe Etienne, visited New Delhi. On October 4, at his meeting with the PM, Mr Etienne briefed Mr Modi “on the strengthening ties between India and France in all sectors, including in the areas of defence and security”. At this meeting, Mr Modi fondly recalled his successful visit to France in June 2017. He told his interlocutor that defence and security were the two important pillars of the India-France partnership.

Mr Modi had paid a short visit to Paris on June 3 to acquaint himself with Mr Macron. The talks between the two leaders mainly centered around the Paris Conference on the environment as US President Donald Trump had just announced American withdrawal from the Paris Accord.

Speaking afterwards, Mr Modi declared that the Paris climate deal reflects “our duty towards protecting the mother earth and our natural resources. For us, protection of the environment is an article of faith”. Perhaps more important, a “current of understanding” had passed between the two leaders.

The recent visit of Ms Parly must be seen in this perspective: a special relationship, which already works, needs to bloom further. Of course, it includes the field of defence, particularly selling more Rafale combat planes, which is on the table, at least, for the French and the Indian Air Force.

Before the visit, a national newspaper noted: “After selling 36 Rafale fighter jets to India for $8.7 billion (`58,000 crores) last year, the French government is now pushing for a project to manufacture warplanes in India to give a boost to Prime Minister Modi’s push to encourage local manufacturing under ‘Make in India’.”

A defence ministry official said though Ms Parly’s visit “is aimed towards strengthening defence cooperation, offering a production line in India for Rafale jets will surely be on the cards”. It is not known if this was discussed between Ms Parly and defence minister Nirmala Sitharaman, but it is significant that the French minister travelled to Nagpur to launch a joint production facility between Dassault Aviation and Reliance to fulfil the Rafale deal’s offset obligation. Around Rs 20,000 crores need to be invested by the French. Ms Parly, along with Dassault Aviation chairman Eric Trappier and Reliance ADAG chairman Anil Ambani, laid the foundation stone of an aerospace park for manufacture of aircraft components.

The Dhirubhai Ambani Aerospace Park (DAAP), being set up in Nagpur’s Mihaan Special Economic Zone, will spread over 289 acres. It is due to be the largest greenfield aerospace project in India. The Dassault–Reliance Joint Venture (JV) has already shortlisted a large number of vendors, mostly small and medium-sized enterprises, to be part of an indigenous supply chain for the Rafales. Its objective is to build a strong base for the success of the Rafale programme under the “Make In India” scheme. According to an official: “The production at the facility is expected to start in the first quarter of 2018 and phase one will be fully operational by the third quarter of 2018.”

The strengthening of Indo-French relations will greatly depend on the success of this JV. Another “test”, a difficult one at that, has been the collaboration for the construction of six Scorpene submarines at Mazagon Dock in Mumbai. When asked by a reporter about France joining the Indian Navy’s project (Project-75-India) for the six new-generation submarines, Ms Parly said that the French naval group (DCNS) had proposed “a new submarine design and the associated weapons systems which are perfectly adapted to the high ambitions of the Indian Navy and incorporate cutting-edge technologies”.

Talking about the Scorpene experience, she remarked: “We already have in-depth experience of cooperation with Indian industry to build modern and effective submarines in India.” About the massive leak of confidential data in the Scorpene submarine project in Australia, she quoted Mr Macron and Mr Modi, who had said: “This matter is now behind us.”

Let us hope so.

Beyond these experiences in concretely working together, one can hope that Mr Macron’s encounter with Mr Modi in December will give a new impetus to a grand “Act West” policy.

It would also make economic and strategic sense for India to partner with France in more futuristic research projects like a fifth-generation plane or an armed drone.

Mr Modi spoke to Ms Parly about “greater cooperation in the ‘Make in India’ framework in defence manufacturing and joint research and development”. It would be beneficial not just for India, but for France as well as it would get the crucial financial support and market. Such a faraway possibility is worth thinking about.