DeMo: What did the madness cost?

The sheer trauma of the event etches the day vividly in our memories. 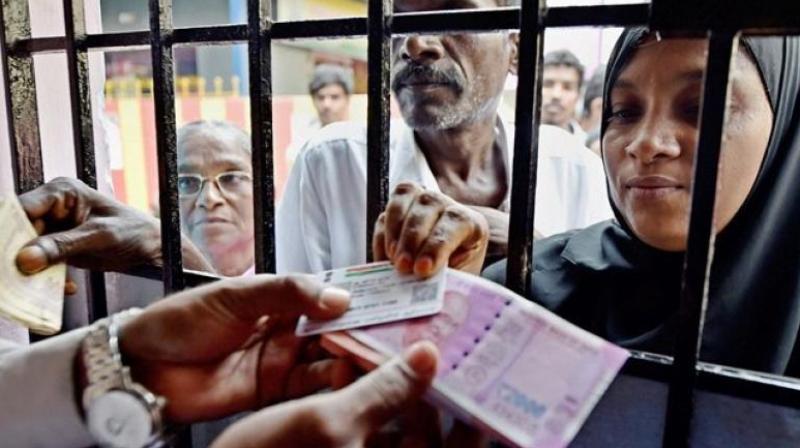 According to a 2011 Pew Research Survey, 95 per cent of Americans born in 1955 or earlier said they could recall exactly where they were or what they were doing when John F. Kennedy was killed. The sheer trauma of the event etches the day vividly in our memories. Indira Gandhi’s assassination on October 31, 1984 was yet another day. Most of us who were alive then can recall small details of that day. Even now I can recall every incident and conversation of that day. The demonetisation of November 8 last year has become another day similarly etched in most minds.

I was entertaining some friends at home in Secunderabad when I heard that the Prime Minister was going to speak to the nation. My friends and I clustered around the TV and heard Narendra Modi make the announcement by saying: “Brothers and sisters, to break the grip of corruption and black money, we have decided that the 500 rupee and 1,000 rupee currency notes presently in use will no longer be legal tender from midnight tonight, that is 8th November 2016”. All the Rs 1,000 and Rs 500 notes I had were in my pocket that day. It was not much, but the sheer fact that they were no longer worth anything was disconcerting. I also realised that my savings in the bank were now worth only Rs 4,000 a week. Suddenly, I not only felt naked and vulnerable, but also hugely humiliated.

One of the persons at dinner that evening was someone known to us as having lots of money. But he showed no signs of concern. I asked him if he would hurt due to this? He replied — not any more than you. He then said something I will never forget. Those who have lots of “number two” don’t become rich by being stupid. The money on which income taxes were not paid is always kept in kind or out of the reach of the nation’s financial system. That I knew was true, as research had consistently shown that of the undeclared income each year, almost half is invested in property, and about 44-46 per cent equally invested in gold and jewellery and illicitly exported overseas, and just 4-6 per cent is held in cash.

By sudden demonetisation the government sucked out almost 87 per cent of the money in the system, or Rs 15.44 lakh crores. When the Prime Minister announced this demonetisation to rid the nation of “black money”, which really means income and financial transactions that didn’t realise for the state its rightful share of taxes, the entire nation welcomed it. The other reasons the government gave for this is that it wanted the purge the system of counterfeit notes and break up the terror finance network.

There was indeed a certain problem with Rs 1,000 counterfeits. In 2014-15, they rose by 22 per cent to almost six lakh pieces. In 2015-16, of the counterfeits detected, 415 were in Rs 500s, 35 per cent in Rs 100’s and the rest in Rs 1,000s. Consider this against the fact that in April this year there were Rs 1,646 crores of Rs 500s and Rs 1,642 crores of Rs 100s in circulation. In relation to this, the counterfeits were small change and not distorting the system by much. A better way could have been found to filter them out by an orderly exchange of high-value notes. The RBI now reports that the detection of counterfeit notes was 20.4 per cent higher in FY17 than in the previous year. Despite the rise, the total value of counterfeit notes was an insignificant Rs 42 crores. So was it worth the trouble?

It’s very evident that the government was clearly unprepared to embark upon such a major “reform”. When the crunch was inflicted the Reserve Bank and the banks didn’t have enough notes in other denominations to pick up the slack, even somewhat. Instead, the nation experienced the breakdown of the financial system, and the severe pain it inflicted on hundreds of millions who sustain themselves as daily wage earners, small retailers of perishable goods and farmers who have to invest now to sow and reap harvests of foodgrains and fruits and vegetables.

It took the RBI many months just to replace the high-value notes. Till then the anemia persisted. There was bound to be economic costs for this prolonged anemia. Former Prime Minister Manmohan Singh, less of a politician and more of a top-notch economist, estimated the consequential contraction of GDP to be about two per cent. He has now been proven almost on target. The official GDP figures are confirming this. Apart from the Rs 36,000 crores, which is the estimated cost of the new Rs 500 and Rs 2,000 notes, the loss of GDP will amount to about Rs 3 lakh crores. This is money that cannot be recovered ever. It was just madness.

Now look at the scale of damage caused. India has a workforce of close to 450 million. Of these, only seven per cent are in the organised sector. Out of these 31.5 million, about 24 million are employed by the State or state-owned enterprises, the rest being in private sector employment. Of this vast reservoir of over 415 million employed in the unorganised sector, about half are engaged in the farm sector, another 10 per cent each in construction, small-scale manufacture and retail. These are mostly daily wage workers and mostly earning less than the officially-decreed minimum wages. The economy may not have ground to a complete halt, but in hundreds of million homes the cooking fires were not being lit in the immediate aftermath. This is because most daily wage earners were not getting paid in full or even in part. And even if they were paid with the old notes, and even if they could enter banks, where were the smaller notes or even new notes for the banks to exchange them with?

And consider this — as much as 55 per cent of FDI investment (about $44 billon last year) is actually Indian-owned money round-tripping its way back from the economy it cheated of its taxes. Is the government now going the look at this gift horse in the mouth, by asking these ECBs to declare their origins?

After not anticipating the scope of the economic devastation visiting the nation, the Prime Minister began singing a new song. He began hollering that he was fighting for the vast mass of the poor who have been looted all these decades by the upper classes. He thus demonised the upper classes and has fired the starting gun for class warfare. Fortunately or unfortunately, the most vociferous of his supporters are exactly the people with most of the “black wealth”.

In the days after demonetisation, the Modi government alluded to a windfall that was expected because of the “black” cash that will not be returned to the banks. They were expecting that almost a third of the notes wouldn’t be returned and this will realise the government over Rs 4 lakh crores, money that will come handy to recapitalise the PSU banks burdened with NPAs. According to the Reserve Bank annual report released last month, 98.96 per cent of the Rs 500 and Rs 1,000 notes (by value) that were invalidated due to the demonetisation exercise have been returned. The estimated value of the banned notes the RBI has “received” is Rs 15.28 lakh crores. This compares with the Rs 15.44 lakh crores of the invalidated notes that were in circulation as of November 8, 2016. Quite clearly, the entire demonetisation exercise was a huge failure and nothing short of a great vandalism of the economy.