What will New Delhi talk about on Kashmir?

There is no common ground on which a government in Srinagar can parley for Kashmir’s rights with New Delhi. 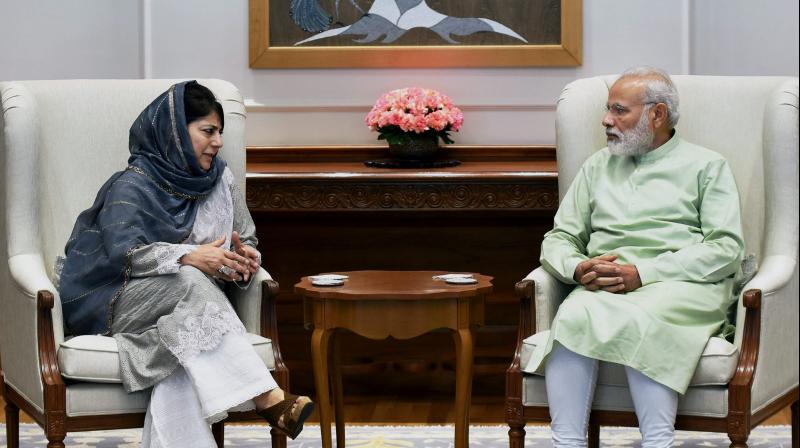 On April 24, schoolgirls in uniform rushed out of a higher secondary school, picked up whatever they could lay their hands on, and started hurling the projectiles on police vans. This was in the busy Lal Chowk area the commercial hub of Srinagar. The people have shed fear of the gun and approach security forces and police defiantly. They chased the police vans, booed the policemen and shouted “azadi!”

Nothing like this had been seen before. As Toufiq Rashid, a journalist, who witnessed this, remarked: “Like their teenaged male counterparts these girls seemed not to fear death.” What she added about their desperation and courage is ominous. “Till this issue is addressed heart-wrenching images will keep coming out of Kashmir.”

Any incident, big or trivial, suffices to trigger open revolt. It is reminiscent of the upsurge in 1989-90. If the truth be told, it is because the people never reconciled themselves to India’s rule over them. On May 14, 1948, an eyewitness to the popular mood wrote from Srinagar: “They say only Sheikh Sahib (Abdullah) is confident of winning the plebiscite.” That eyewitness was Indira Gandhi, who advised her father Prime Minister Jawaharlal Nehru: “Personally, I feel that all this political talk will count for nothing if the economic situation can be dealt with. Because after all, the people are concerned with only (one) thing — they want to sell their goods and to have food and salt.” They had no soul.

Now, nearly 70 years later, this is still Prime Minister Narendra Modi’s recipe — vikas (development). It is a convenient one for it suppresses the reality of a rebellious people’s rejection of sops.

This is coupled with conscious self-delusional themes such as Pakistan’s instigation to armed terrorists. These girls, like all others, acted in pent-up rage. They were not terrorists. They were freedom fighters in the classic mould.

India cannot countenance Kashmir’s separation. But it can yet go a long way to grant the substance of azadi to the people and in talks with Pakistan. The Modi government has set its face against conciliation with both. It is out to crush the popular revolt by armed force. The Bharatiya Janata Party’s hitherto undreamt of entry into the Valley through a coalition with the People’s Democratic Party has emboldened the Centre. “Laaton key bhoot baton sey nahi maantey; inka ilaj jootay hai”. This was said in Srinagar last month by a senior BJP minister Chandra Prakash Gupta. He spelt out the implications of this saying in the present context. “They are traitors whether they have come from Pakistan or live here. There is only one remedy for them and that is bullets.” Expression of regret, under pressure, cannot obscure the fact that it truly represented the BJP’s outlook.

Confirmation was provided by an architect of the coalition, BJP general secretary Ram Madhav. Last month, a 26-year-old was tied in front of an Army jeep to serve as a “human shield” in order to keep the protesters away on polling day. Mr Madhav justified it: “In war and love, everything is fair” in a war on the people of Kashmir.

Chief minister Mehbooba Mufti was snubbed by Prime Minister Narendra Modi when she met him to plead for some conciliatory moves.

There is no common ground on which a government in Srinagar can parley for Kashmir’s rights with New Delhi. The PDP’s pact with the BJP only fuelled popular resentment which had simmered for decades beneath the surface.

In such a situation, pleas for a “dialogue” or “talks” are pointless. What will New Delhi talk about? Like Indira Gandhi in 1948, it feels that the people can be bought with sops. Unless the stark reality of utter popular rejection of Indian rule is accepted and measures devised to satisfy the people’s aspirations realistically, mere talks will not help.

The Government of India flatly declared in the Supreme Court, on April 28, that it would “absolutely” not entertain any talks on azadi with the leaders of the Hurriyat. The talks must be within the framework of India’s Constitution.

In the byelection to the Lok Sabha from Srinagar, the National Conference leader Farooq Abdullah won, on April 15, by a seven per cent turnout of voters. Militants are active though there are just about 250 of them. A massive military presence cannot snuff them out.

The situation in Kashmir is unlikely to improve as the Modi government is set to quash militancy with brute force in the hope that once militancy is crushed, the people will acquiesce. Pakistan will be told that the Kashmir dispute is “solved”. History shows that such tactics never succeed. They have not, from 1948-2017. As Tacitus wrote: “They created desolation and call it peace.”