Donald Trump has criticised the “politically correct” US immigration policies that had enabled Saipov to enter the country. 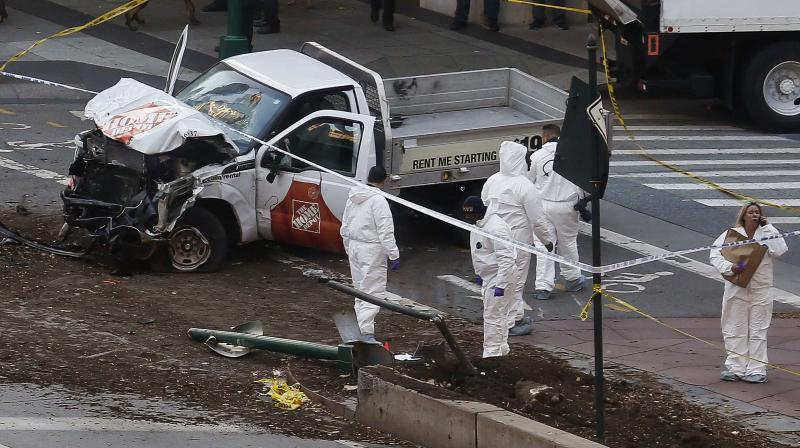 Authorities stand near a damaged Home Depot truck after a motorist drove onto a bike path near the World Trade Center memorial, striking and killing several people in New York. (Photo: AP)

After his truck hit a school bus, Saipov came out shouting “Allahu Akbar” (God is great, in Arabic) before he was shot by a policeman. He is now being treated in hospital. His truck had a note fixed to it saying: “Islamic supplication will endure forever”. This was the worst terrorist attack in New York City since the horror of 9/11 a decade and a half ago.

Saipov has confirmed that he acted on behalf of the Islamic State, and that he had responded to the call of its “caliph” to all Muslims to revenge the killing of their brethren during the US bombings on Mosul as the ISIS “capital” in Iraq was under military assault from Iraqi forces.

US President Donald Trump has criticised the “politically correct” US immigration policies that had enabled Saipov to enter the country, and the feeble judicial system that had failed to impose harsh deterrent punishments. According to Mr Trump, Saipov was an “animal” who deserved the death penalty or being sent to Guantanamo. New York governor Andrew Cuomo has said that Saipov was a “lone wolf” who had been “radicalised domestically” after reaching America, affirming that Saipov had not had any direct contact with a jihadi organisation.

Early investigations reveal that Saipov had been planning the attack for over a year, but seriously started doing dry runs with a truck over the last two months. He said he had deliberately chose Halloween for carrying out his attack as there would be large crowds in Lower Manhattan.

He was radicalised by exposure to ISIS propaganda material available on the social media. Investigators have found 90 ISIS videos in his possession, with 3,800 pictures of ISIS activities, including beheadings, killings of prisoners, bomb-making instructions, and other slick material produced by the organisation to attract recruits from diverse countries and backgrounds.

Saipov used the truck as his weapon of attack, following similar earlier attacks by ISIS adherents in France, Britain, Germany, Sweden, Spain and Canada. Saipov is said to have closely followed the manual from ISIS on the social media that describes the type of vehicle to rent and the type and timing of the attack to wreak maximum destruction.

In the November 2016 issue of its mouthpiece, Rumiyah, ISIS had said: “Though being an essential part of modern life, very few actually comprehend the deadly and destructive capability of the motor vehicle and its capacity of reaping large numbers of casualties if used in a pre-meditated manner.” Such vehicle-ramming attacks are particularly devastating since they are easy to carry out and it is almost impossible to pre-empt them.

The latest New York attack has revived the debate on the factors that radicalise Muslims and lead them to perpetrate violence. Given the fact that lone-wolf violence is a relatively recent phenomenon, both academics and counter-terrorism experts have made little progress in addressing these issues. Analysts have observed that the profiles of lone-wolf terrorists present a very unclear picture, indicating variously — confused sexuality, confused religious identity, possible mental illness, anger management issues and possibly a dysfunctional family life.

On several occasions, the perpetrators have indicated no clarity about jihadi ideology being their motive force. This leads to the tentative conclusion that the act of violence is just an opportunity for a socially ill-adjusted individual with violent tendencies to seek some meaning in his miserable life by associating himself with a dramatic act that would serve a larger historic purpose, far beyond his tawdry existence.

American security analyst Tom Mockaitis believes that lone-wolf attackers could have dysfunctional backgrounds along with personal grievances which lead them to “identify with an existing movement and act on its behalf”. ISIS is of course particularly adept at alluring such misfits to carry out acts of violence in its name.

But this understanding is of little use for law enforcement officers to prevent such lone-wolf attacks. As a European security officer said, a lone-wolf attack can come “in any size, any shape, and any ethnicity, as well as representing any ideology”.

There is similar uncertainty on the sources of radicalisation of lone-wolf terrorists. Observers have noted that the social media, “through bits and bytes of the digital age”, creates a community of “followers of a borderless loyalty”. Here, Jen Easterly and Joshua Geltzer make the important point that, whatever the influence of social media, the actual move from inspiration to action is that of the lone-wolf himself; it is he who selects the targets, the weapons, the timing and the mode of attack.

They believe that ISIS messages on the social media are particularly effective for people who are lonely: they are now made partners in a historic cause, an enterprise far bigger than anything they could on their own have been associated with. Thus, they note the social media in today’s digital media age has made the term “homegrown” obsolete.

But there is now a bigger challenge before us. ISIS expert Graeme Wood sees Saipov as a “complete idiot” since he had a fake gun and could easily have been taken down by a policeman. What he fears is that, with the fall of the ISIS in both Iraq and Syria, some of the ISIS’ battle-hardened fighters could return home and launch what he calls the “campaign of competent terror”, marked by careful planning and lethal weaponry, on the lines of the Batacalan attacks in Paris in November 2015, in which 90 people were killed, and the more recent (non-ISIS related) attack by Stephan Paddock in Las Vegas, where 58 persons were killed and over 600 others injured.

That is the dreadful prospect before the international community after the “defeat” of the Islamic State at US hands in Iraq and Syria.