As is the concept of “cultural expropriation” — another idle Western undergraduate shibboleth. 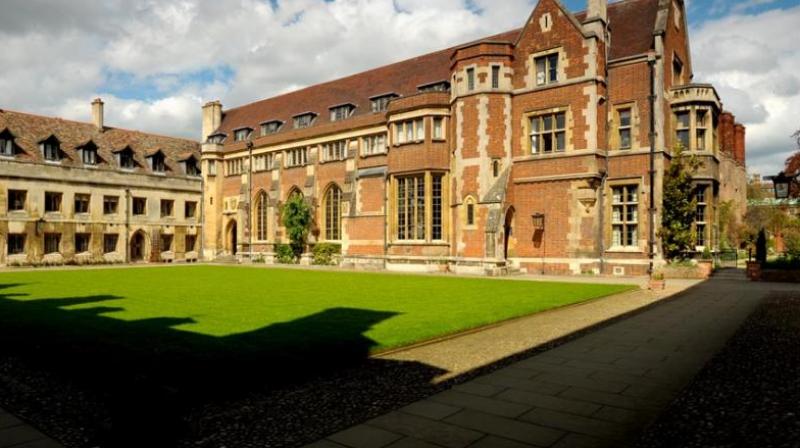 “Chickens lay eggs and
Eggs breed chickens
We call it the vicious circle.
Get really vicious, smash the egg
Defy the karma start anew
Nothing in nature waits for you!”
From The Jig Jig Proverbs
by Bachchoo

The elite of Britain are being silly and ask forgiveness for sounding like Donald Trump. I meant by that not the political elite but the elite-in-waiting of the British universities. First there was the no-platforming of speakers with whom some undergraduates disagreed. They banned the founding modern feminist Germaine Greer from speaking at a university because she had said that men who have their penises chopped off and undergo hormone treatment don’t become women any more than humans who have their ears floppily extended become cocker spaniels.

And now Pembroke College at Cambridge is changing its weekly menu for students who have to eat in Hall — a compulsory part of “keeping terms”. One or two undergraduates have spent their time protesting about “microaggressions and cultural misrepresentation”!

They were served a dish with mango and beef and the Pembroke chefs called it “Jamaican stew”. An undergraduate who identified him or herself as half-Jamaican posted something on the Internet saying “show me where in the Caribbean they mix meat and fruit?” Another undergraduate complained about a dish of cauliflower, tofu and date tagine with Tunisian rice and coriander yogurt. This complainant said: “Sorry, but what is this, we don’t eat these things in Tunisia.”

The bursar of the college said s/he was “taking the complaints seriously”.

I have no idea what the bursar means. Will the kitchens be instructed to refrain from serving up innovative multicultural dishes, which to me sound delicious and a far cry from what the Pembroke College kitchens dished out in Hall when I was an undergraduate there in the mid-1960s.

I went straight from Poona on a Tata scholarship to Pembroke College, Cambridge, knew about eating in Hall — a compulsory ritual, and inescapable anyway, as I didn’t have any money to eat out or even buy a sustaining sausage. The college served a “meat and two veg” meal every evening which alternated between beef, pork, chicken, lamb, all minimally roasted or cooked; cabbage and some form of potato, roasted or boiled. That was it! No tagine or mango stewed with anything, my dear boys and girls! Hall was entertaining with the likes of Clive James holding forth on any and everything in politics, literature and pop and with the boys from public schools perpetuating their childish habit of throwing bread buns at each other across the Hall.

The food was dull, the lessons in the British differentiations of class and taste instructive. So what are these undergraduates complaining about? In our time we demonstrated against American involvement in Vietnam. We protested against discrimination against ethnic minorities in this, that and the other institutions of Britain. I can remember a number of protests and demonstrations when we faced and even fought, justifiably or not, the British police.

I can’t recollect any protest against the labelling of food on the Pembroke College kitchen’s menu.

This is new. This is token and sissy politics. What is the person, protesting through a qualification of being half-Jamaican, saying? Should the dish, some attempt by the chefs to be multicultural, be banned or renamed? Will the banning or the renaming be a heroic revolutionary triumph? Was the complainant protesting against the amalgam of European and Jamaican cuisine as an act of miscegenation? Does this stricture against the cross-fertilisation of British and non-British cuisine apply to the promulgation of children? Should s/he have a word with his/her mixed parentage about it? Does s/he believe, out of ethnic cultural purity, in not existing?

Food (leave aside the more profound subject of the mixing of races) has traditionally in all cultures been cross-bred, transferred from continent to continent and amalgamated in very many ways into universal cuisine. It is common knowledge that Marco Polo brought pasta to Italy from China or that, chillies and potatoes came to India from America via the Portuguese and the British colonialists. Generations of Indians have cooked their signature dishes using chillies and “aloo this and aloo that!”

It’s time the undergraduates and bursar of Pembroke digested the fact that bastardisation is the essence of cuisines worldwide. My mother would feed us French toast — something the French have never heard of — and then there was on occasion a dish called Country Captain, which was clearly a jumble of ingredients that hadn’t been thrown together before.

On a trip to lecture at Bologna University I was taken by my professorial hosts to dinner at their favourite restaurant. When asked what I’d like I naively said: “I suppose that in Bologna one should eat spaghetti Bolognese”. The company didn’t know what that was and asked the maitre if he did. He looked puzzled. They asked me to describe the dish and I did. They identified it immediately saying “Ah! Raggu!” I did point out that all over the world, in every Italian restaurant abroad, and no doubt even at Pembroke, spaghetti with meat sauce is known as Bolognese.

The idea of “cultural miscegenation” of food is at best the product of idle minds and at worst an indication that a phalanx of the present university generation have lost any sense of what real political action means and are desperately in search of phrases to ban. It’s humourless, futile and as any historian of food will tell you, ignorant.

As is the concept of “cultural expropriation” — another idle Western undergraduate shibboleth. Yes, even I think that Idi Amin in a kilt is an absurdity, but the undergrads who protested against a white musician who wore his hair in dreadlocks were guilty of the sin they condemned. No less than Bob Marley’s granddaughter told me that she was journeying to Varanasi to trace the origin of the hairstyle among the ancient sadhus of India.