Kumar said it was imperative to have leadership that was anchored in idealism and committed to the idea of India to take it forward. 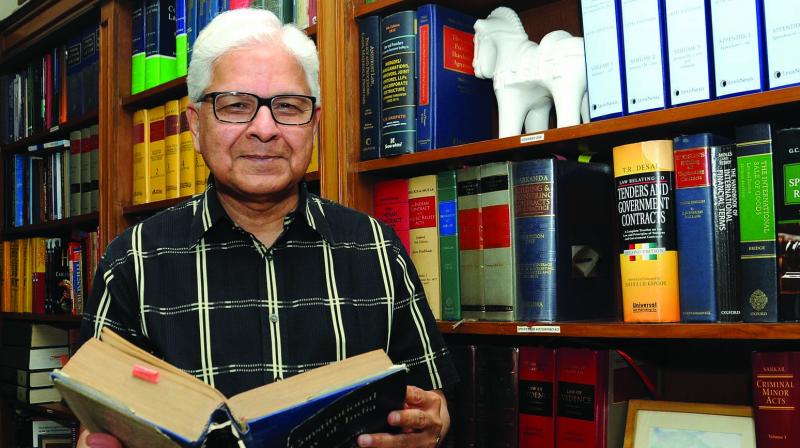 In the framework of the dysfunctionality of Parliament and a complete breakdown of dialogue between the government and the Opposition, former Union law minister and senior Congress leader Ashwani Kumar, who is known for expressing his views candidly, spoke to Sanjay Kaw about the political challenges facing India today. Dr Kumar said it was imperative to have leadership that was anchored in idealism and committed to the idea of India to take it forward. He also said that the nation deserves leadership befitting the challenges it faces for which it is incumbent upon all to efface personal vanities, prejudices and ambitions. Excerpts from the interview:

What is your take on the country’s prevailing political climate?
I think we have never before witnessed a graver political scenario in the country than what we are facing today. The unprecedented deadlock of Parliament resulted in the passage of the Finance Bill without discussion. The inability of the Lok Sabha to take up the no-confidence motion and to discuss the burning national issues of the day, including the escalating caste conflicts, has confirmed the dysfunctionality of Parliament as the highest forum of our democracy. The almost total absence of deliberation and debate on key national issues in Parliament has the potential of negating the very basis of our constitutional and parliamentary democracy. I believe that the principle reason for such a state of affairs is a complete lack of trust in each other among top political leaders of the country. An atmosphere in which political discourse is defined by vitriol and calumny. Vendetta can never be conducive to the forging of a broad political consensus on national issues, without which we cannot move forward as a nation. The nation is yearning for leadership that can show the way forward and lead to reclaim our republican ideals of inclusion, liberalism, secularism and egalitarianism. I recall a couplet by Allamah Iqbal who said: “Nisha-e-rah dikhate the jo sitaro ko, ha kisi mard-e-ralidan ke liye.” We deserve a leadership befitting the challenges that we face, for which it is incumbent for all to efface personal vanities, prejudices and ambitions. We need a forum of senior political leaders representing different political parties to facilitate a constructive political dialogue free from rancour and anchored in the consideration of the national interest alone. Winning elections cannot be the sole reason for political parties to exist. We need to do what is right on principle, and not what may seem to be electorally or politically expedient. This would demand leadership rooted in idealism and sustained by the ability to sacrifice personal ambitions if necessary.

You have talked about the need to do in politics what is right as principle. Can you please elaborate on this…
I am reminded of what our founding fathers and Mahatma Gandhi told us. We were told what is not morally right over principles cannot be politically correct. We see an increasing tendency to appease majoritarian impulses against matters of principle. For example, without respect for the established rule of criminal jurisprudence that a person is presumed to be innocent until proven guilty, we hasten to condemn the person on the basis of mere allegations whether these pertain to charges of corruption, impropriety or criminal offences. Recently a Supreme Court judgement which cautioned against the wrongful arrest of any person invited a huge political reaction, obviously to prevent a political backlash. In my personal view, the move to impeach the Chief Justice of India was constitutionally and in principle unsustainable.

In the prevailing national scenario, what significance you attach to the 2019 Lok Sabha elections?
The next Lok Sabha elections will be a watershed event in the political history of our country. The parliamentary election should be seen as a choice between the idea of India defined by its plurality, inclusion and liberalism on one side, and the divisive political agenda of the communalists, dogmatics and the authoritarians on the other side. The regional parties will play a decisive role in ensuring the triumph of our republican ideals. Their support in association with national parties will be critical to avoid a split against those who want to script a new idea of India alien to our civilisational ethos. I have hope and confidence in the judgment of the people of India that they would decide correctly.

How do you see the Congress under Rahul Gandhi’s leadership?
I believe that the resurgence of the Congress and its inclusive ideology is a national necessity. Even the political opponents of the Congress accept this in private conversations. The Congress is in a state of transition, with the baton having been passed to Rahul Gandhi, who is young and has sought to define his leadership through idealism and concern for the marginalised, as it should be. His challenge is to ensure the willing support, affection and respect of all Congress persons through a just and fair recognition of their role and contribution in the party. I believe that he will try to take along all Congress persons while refashioning the party in the image of his ideological and political priorities.

Where do you see Prime Minister Narendra Modi after the 2019 elections?
I do not think anybody is seeking to write off Mr Modi. The political battle ahead is long and hard, and will need to be fought on the issue of reclaiming a liberal India free from fear, in which the cry for freedom remains, as one of my friends has written, “an unending frenzy”.

How is India being looked at globally under Mr Modi’s rule?
During UPA-1 and UPA-2, various initiatives were taken by India that firmly established its leadership role not only in Asia but across the world. The India-US civil nuclear deal and the Indo-Japan strategic partnership, among other initiatives, such as the partnership with the African countries, established India’s pre-eminent position in the comity of nations. The foreign policy of India has evolved as a continuing process and is conducted on a non-partisan basis. Mr Modi has sought to carry forward some of the initiatives of the earlier governments. However, the deterioration in our relationship with Pakistan, China and even Nepal is a cause of concern. This needs to be addressed in the larger national interest. It is necessary for us to establish at least a working relationship with all our neighbours, even as we seek to establish a closer rapport with them. It is imperative that the government takes all initiatives to project the country as one committed to the promotion of human rights, social harmony and global peace.