‘Impact of #MeToo will take time... It’s a step towards a just world’

The Act allows for complaints to be made within 30 days of the incident, and in case of delay within an additional 30 days. 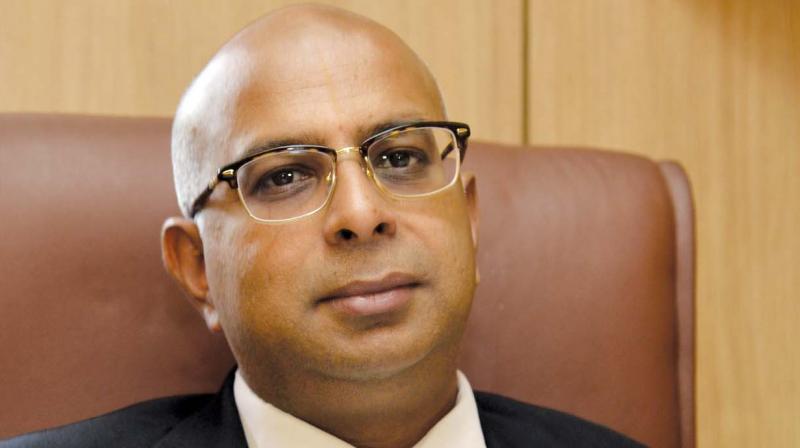 The #MeToo campaign is snowballing into a big tsunami. Supreme Court lawyer Balaji Srinivasan, who fights for women empowerment and filed the first petition against triple talaq successfully, talks to J. Venkatesan on the impact and legal ramifications of this campaign. Excerpts:

Following the global outrage over the Harvey Weinstein incident in the West, where the noted Hollywood producer was accused of sexual harassment by over 70 women, the #MeToo movement has arrived in India, engulfing the whole media and entertainment industry. Several women have bravely come out with stories about harassment and sexual abuse at workplace at the hands of the powerful and higher-ups. Why this campaign has started all of a sudden and what is its impact?

The current wave of feminism globally is centred on technology. Women are using digital tools as a means of expression, finding an escape from tradition sources of broadcasting such as newspapers and magazines, which were controlled in the past by the very persons who these women sought to call out. The emergence of an individual voice, and a means to carry that voice to the people through the social media and the Internet, is perhaps the single most important factor, which has given this movement the traction it has gained.

The movement is not just a sudden campaign, but a real evolution in terms of how traditionally women are perceived in the workplace, at home and in public spaces. It is built on global movements seeking equality in suffrage, education and economic opportunity. It is a call from feminists across the world to value the contribution of people who have not been given access to the corridors of power and to recognise basic tenets of equal opportunity in all spheres of life.

Perhaps a facet which is unique to India in this movement is that women who are coming forward after significant periods of time feel failed by the legal and social systems of the country. At the time of the offence, they face substantial resistance from friends, family and the powers that be. There also exists a social stigma. To further worsen things, the lack of training to our police on these matters, the lack of sensitivity training and the glacial pace of our courts, all contribute to this movement today. The overwhelming feeling is that perhaps where legal justice failed social justice may prevail.

The short-term impact is there for all to see. There are social boycotts, layoffs and stigmatisation. The long-term impact will take some time, but hopefully this is a step towards a more just world.

Ever since Tanushree Dutta, in an interview, alleged that actor Nana Patekar misbehaved with her while filming a special song for Horn Ok Pleassss in 2008, many well-known comedians, journalists and actors have been named and shamed on the social media in the past few days as allegations of sexual misconduct continue to burst out. This has given rise to Time’s Up campaign. What will this campaign lead to?

Time’s Up is an expression of astonishment that certain attitudes and practices still exist in the 21st century. It sounds the gong, calling out loudly and often that certain practices shall not be tolerated going forward. Wonderfully complementing the #MeToo campaign, it sounds out that while in the past all women have been victims of sexism, male privilege and general abuse, those times are gone and such wanton abuse of dominance will not be permitted any longer.

This movement is now threatening the reputation of careers of several leading personalities, including Union minister M.J. Akbar, actor Alok Nath, singers Kailash Kher, Raghu Dixit and others. What is the remedy available for victims and perpetrators particularly when allegations are made after 10 or 20 years? Is there a time limit for filing complaints?

Section 468 of the Code of Criminal Procedure provides for a period of limitation with respect to certain offences wherein the punishment prescribed is imprisonment under three years. With respect to offences where the punishment prescribed is over three years, no limitation is prescribed for filing of complaints. Condonation of delay is also provided in cases where the court deems fit in the circumstances and finds that the delay was bona fide and not due to latches.

For serious offences, the Supreme Court has regularly held that the question of delay in filing a complaint may be a circumstance to be taken into consideration in arriving at the final verdict. But by itself it affords no ground for dismissing the compliant.

A Constitutional Bench of the Supreme Court, in the case of Sarah Mathew vs Institute of Cardio Vascular Diseases and Ors, 2014, which incidentally also had the present Chief Justice of India Justice Ranjan Gogoi in its quorum, found that several offences which have lesser punishment may also have serious social consequences, and thus there exists a provision for condonation of delay in the statute itself.

In light of the law laid down above, the remedy for victims is to approach the courts and the police and make complaints. For less heinous offences, they shall have to explain to the court the delay, and unlike in civil courts, the criminal courts also have a duty to apply their own mind and satisfy themselves that the delay was due to some bona fide extenuating circumstance. For grave offences such as molestation and rape, the courts are bound to take action under law.

Perpetrators will have to face trial. They are presumed innocent until proven guilty. They are at liberty to prove to the court that the offence was not committed. The burden of proof is on the perpetrator, not the victim.

India is traditionally a conservative society, where discussions about sex or sexual advances are still a taboo for women. Once the reputation has been tarnished, how the damage done can be remedied?

These movements are all about breaking conventional standards of what is acceptable, what is taboo and whether the reputation of the woman is actually tarnished. The point of the movement is that the shame is of the accused, not the victim, and that the traditional notions of being demure, docile and willing to take abuse are no more true. The backing that these movements have received is further a proof that the question of what is traditional, conservative and taboo is changing. This is all made possible through greater access to technology.

There is an allegation in certain quarters that those women who level allegations of sexual harassment are doing with a motive to demand huge amounts as compensation and to drop the cases. Is there truth in these allegations?

These have to be gauged on a case to case basis. That said, movements with such grassroots support cannot be without some element of truth in them. Individual cases aside, the cause and the movement cannot be faulted.

Can the Sexual Harassment of Women at Workplace (Prevention, Prohibition and Redressal) Act, 2013 be invoked against the perpetrators to take the complaints to the logical end? But in the #MeToo campaign, so far no one woman or girl is willing to file a formal complaint which can result in investigation and filing of chargesheet. In this context can the allegations be treated only as a “name and shame” threat with some ulterior motive?

The Act allows for complaints to be made within 30 days of the incident, and in case of delay within an additional 30 days. If complaints are made within time, the Act is a potent tool in the hands of victims to take strict action against the perpetrator of such crimes.

The “name and shame” is not an ulterior motive, but as stated earlier a call to social action. These victims have felt that they have been failed by the legal system and the social system of the past, and are now using the new social awareness to call out these predators, so that these offences are not repeated in the future. While there may be some false complaints, that brush cannot paint the whole movement in a falsity or gimmick.

Some of the employers have expressed concern that the campaign might spread to business houses and has the potential to disturb the working atmosphere and employee-employer relations. Will this affect a company’s overall growth?

Every revolution or evolution has the potential to create short-term disruption in existing practices. In the long term, this movement will increase the participation of women in the workplace and bring renewed focus to the actual work instead of these basic rights which were guaranteed 70 years ago. The movement has the means to create stronger businesses, robust economies and stronger societies.

It is also possible that to attract public attention these women go to the extent of damaging the character and conduct of others. Can these women be prosecuted for false complaints in the context of “Right to Privacy” which is now a fundamental right?

The law provides for both defamation and malicious prosecution. If a case is found to be false, the complainants can be prosecuted for abusing the machinery of the law and for causing loss of reputation to the person complained against. That does not mean that the allegations should not be probed at all.