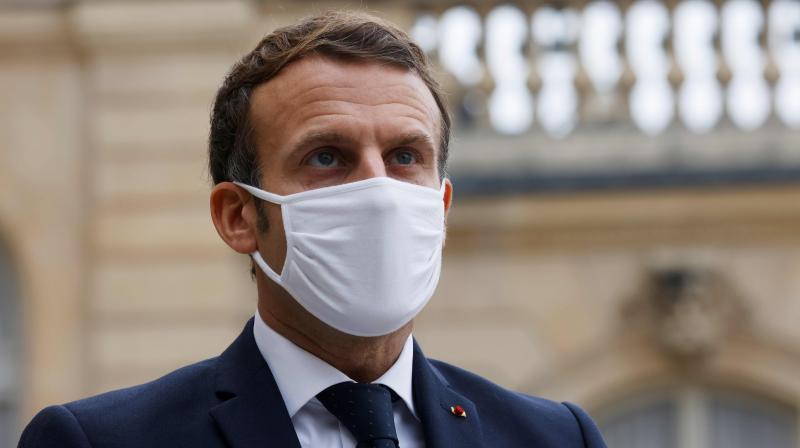 French President Emmanuel Macron looks on as he speaks to the press with the Estonian prime minister following their meeting at the Elysee Palace in Paris, on October 28, 2020. (AFP)

It has been a watershed moment in the over two-decade-old clash of civilisations of which the intelligentsia world over has now sat up and taken note. When a teenager beheaded a teacher about two weeks back for showing the provocative Charlie Hebdo cartoons to his students only as the best example of freedom of expression, all of France rallied for the country’s famous principle of laïcité (secularism) and celebrated culture of discourse wherein any opinion whatsoever is open to scrutiny and vigorous, non-violent debate. But what made the show of support different was the fact that during its course for the first time a head of state openly called upon immigrants rather than the existing population to integrate with French multiculturalism.

This newspaper unequivocally stands behind President Emmanuel Macron to uphold the democratic values of freedom of expression, an activity at the heart of knowledge, freedom of conscience, human dignity and equality between men and women. It also applauds Mr Macron’s plan weeks before to draft a law to fight “Islamist separatism” which will counter the favouring of personal laws over France’s republican values that adversely affect women’s rights. So far, these have been compromised by putative liberals and in the very name of multiculturalism. And that is ironical, as human rights are a universal declaration (Paris, 1948).

Mr Macron’s drawing of distinction between “French Islam” and other forms is also significant in the light of his country’s intensifying brushes with Islamism culminating in the Nice attack of 2016 killing 87. Close on the heels of that attack, families were beaten up in Toulon by Muslim youth purportedly offended at the sight of women cycling on a holiday wearing shorts. It was the inevitable fallout of the rise of Islamic fundamentalism as a reaction to insecurities caused by globalisation, a phenomenon first identified by Dutch sociologist-politician Pim Fortuyn in 1997. Fortuyn was assassinated in 2002.

As a politician himself, Mr Macron should know best how to keep his distance from far right forces. These forces have been trying to hijack this essentially humanitarian cause right since after the agnostic left first brought it to public domain. Nevertheless, it is imperative upon other nations in the world to confront this ever-growing global malaise and see through the power play of leaders like Turkish President Recep Tayyip Erdogan whose aim it is to challenge Saudi Arabia’s leadership of the Sunni world and his supporters, Imran Khan among them. Few indeed spare a thought for the worst sufferers — women in regressive societies who risk torture and opprobrium for routine freedoms but lack a political voice.