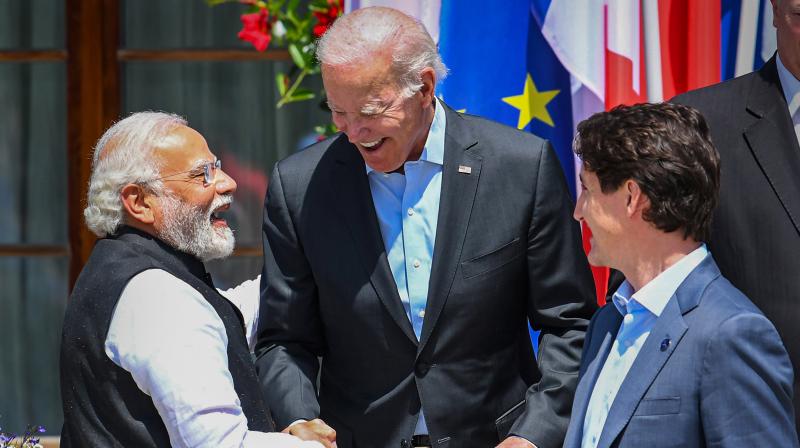 The days are gone when the meeting of the leaders of the western world would resemble more a garden tea party. This year’s meet in a secluded hotel in the Bavarian Alps was held in the shadow of the seemingly never-ending Ukraine war that began on Feb. 24, which meant that the western powers were preoccupied with their responses to Putin’s Russia and to an incipient global food crisis caused by the war more than other issues that the free world is facing.

It must be most satisfying that the presence of India, one of five democracies from the southern parts of the globe invited to the meeting, seems to have made an impact. In the highly personalised atmosphere, the bonhomie among them stood out. India’s Prime Minister Narendra Modi seemed to have particularly hit it off with the likes of Canada’s Justin Trudeau and US President Joe Biden even as the dozen defenders of democracy promised to find sustainable solutions to global problems.

Hard selling India at forums abroad has been something of a Modi speciality and he was on a tougher mission this time in promoting a vision of the future in which green energy would play a significant role. This is particularly relevant currently when the western powers are making efforts to move away from dependence on Russian energy sources for oil and gas. As a country with a lot of human capital involved in furtherance of technology, India has progressed much for a developing country and seeks a seat at the high table with regard to energy security.

Investments in Indian green energy companies have started coming in with an eye on the future. What Mr Modi is asking for from the seven developed countries is a lot more in terms of cooperation in technology exchange and money to take innovations to other developing countries. He also made the telling point that with 17 per cent of the global population, India is contributing only five per cent to global carbon emissions.

While that line only reiterates arguments between developing countries needing old and new energy sources to sustain their progress and historically major polluters who are hunting for greener energy now, there is still scope for a united approach. A proposed “Climate Club” to tackle global warming on a fast track to “a clean and just energy transition” is a way forward and India should aim to be on it too.