Will Ms Barrett undo the feminist legacy of Ruth Bader Ginsburg whose seat she now occupies? 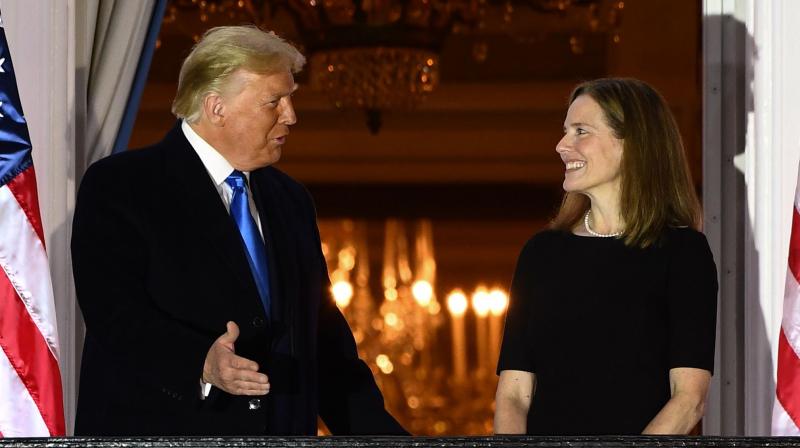 US President Donald Trump (L) stands with Judge Amy Coney Barrett after she was sworn in as a US Supreme Court Associate Justice during a ceremony on the South Lawn of the White House October 26, 2020, in Washington, DC. (AFP)

The Trump years have been ugly, so this may not raise eyebrows. But in confirming 48-year-old Amy Coney Barrett to the bench, after having previously declared that Presidents in their last year in office should not be able to nominate a new Justice to the United States Supreme Court, the Republican-controlled Senate has effectively reversed its own “Mitch McConnell rule” of 2016.

Yet had the “rule” not been in place, it would still have been highly presumptuous on the part of the outgoing President, who is supposed to be functioning largely in a care-taking role, to have actually chosen someone to fill the vacancy in the Supreme Court bench. In so doing, Donald Trump has, in fact, exposed his own fears of not making it to office a second time. The purpose of this last-minute nomination is clearly to rig all future decisions of the judiciary in favour of the Republican Party. It is what is referred to in common parlance as “packing the court”. It goes against the spirit of democratic values.

Will Ms Barrett undo the feminist legacy of Ruth Bader Ginsburg whose seat she now occupies? For sure, her demurrals on critical issues during her recently concluded confirmation hearings have triggered misgivings. The self-described “originalist” and “textualist” sternly avoided questions on how her personal beliefs affected her rulings. But the long-term academic and appeals court judge is known to be a great follower of “superprecedents” at the same time. Ms Barrett once clerked for Antonin Scalia and, as far as personal views go, is pronouncedly conservative.

In 2006, Ms Barrett signed a newsletter criticising the 1973 landmark Roe v Wade judgment (it was no “superprecedent” according to her definition), and defending the rights to life and natural death of the foetus. An appeal against stipulations for the purchase of abortion pills enforced during the coronavirus pandemic, along with 17 other restrictions, is expected to be among the first hearings to come up before the court. Ms Barrett also holds a narrow view of the commerce clause of the US Congress and embraces the non-delegation doctrine. These will prove to be challenges in the way of working out tough laws with the help of federal agencies to combat climate change. Democrats also have reason to fear that Ms Barrett’s presence will impact the future of Obamacare, which the Trump Administration diluted through neglect and waivers.

Expanding the Supreme Court bench upwards of its current strength of nine judges may be a way out of this crisis but is not the ideal solution.