There are legitimate concerns that the Trump-Mohammed duo could lead the region into an all-out war. 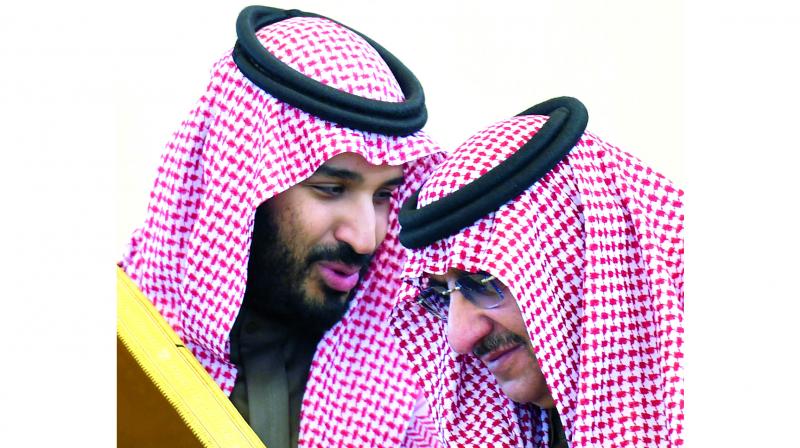 The scene was bizarre even by Saudi standards. The freshly-anointed crown prince, Mohammed bin Salman, kissed the hands of the prince he had just replaced and then, in a remarkably non-Saudi (and, indeed, non-Islamic) gesture, fell to the ground and attempted to kiss the feet of the ousted prince.

Mohammed bin Salman was bidding goodbye (and good riddance?) to the second crown prince who has had to make way, in two years, to fulfil the aspirations of this 31-year old prince, who now wields supreme authority over all matters political, military, energy and economic. Now he’s not subject to any restraining influence. This is an unprecedented concentration of power in the hands of one young prince in the Saudi royal house.

Over the last two years, the deputy crown prince has steadily encroached on his senior royal’s domain: the national security centre was placed under the royal court, the intelligence services saw the appointments of the prince’s favourites, and recently criminal investigation also came directly under the royal court.

Saudi sources have suggested that the prince’s elevation is in keeping with Saudi tradition; the Saudi-owned Al Hayat has spoken of the kingdom’s “perfection” and uniqueness that defies all norms of Western political theory and is founded on the country’s own “deep roots in history”.

These assertions are inaccurate: the steady upward trajectory of the young prince, the powers enjoyed by him, and absence of intra-family consultations contradict the way the royal family has functioned over the past hundred years. They also threaten family unity at a time of grave domestic and regional challenges, aggravated by the collapse of oil prices that has deprived the kingdom of valuable revenues for its wars and reform projects.

Prince Mohammed bin Salman has over the last two years projected himself as his country’s principal spokesman in the national and international media, courting influential Western journalists with detailed interviews of his vision and plans for the kingdom. His most ambitious initiative is “Vision 2030”, a programme of economic and social reform that will prepare Saudi Arabia for a future when it will no longer depend on oil revenues, would give up its “addiction to oil”, as the prince put it.

This initiative calls for the funding of wide-ranging economic reform through the partial sale of public sector assets and the setting up of a robust private sector that would expand and diversify the country’s manufacturing base and employ its youth, who have till recently found ready sanctuary in government employment.

These reforms envisage changes in the nation’s economic, social and cultural areas, with indications that the oppressive role of the religious order could be diluted. Prince Mohammed’s appointment is being projected as the acceptance of youth and modernity in the conservative and authoritarian nation, but there are no suggestions that there would be any scope for popular participation in governance.

Prince Mohammed, as defence minister, is leading two conflicts with neighbours, in Yemen and Syria, both of which have caused widespread destruction, but have not yielded victory, despite investment of billions of dollars into the war effort.

These are both proxy wars, for the kingdom’s ire is really directed at its strategic, political and doctrinal rival, Iran. Here, Prince Mohammed has framed their differences in starkly sectarian terms, accusing the Islamic Republic as being impelled by its Shia doctrine to seek to occupy Mecca and dominate the Islamic world.

Prince Mohammed’s greatest success, facilitated by high-value defence contracts, has been getting US President Donald Trump allied politically and militarily with the Saudi-led coalition; though touted as a “Sunni” alliance, its principal members are Bahrain, the UAE and Egypt.

Strengthened by US support, Saudi Arabia has put in place the diplomatic, economic and communications boycott of Qatar, a fraternal neighbour and Gulf Cooperation Council (GCC) member. Qatar is being penalised for questioning the Saudi dependence on Mr Trump and recommending engagement with Iran as a major Islamic country and regional power.

Prince Mohammed’s formal appointment as crown prince and his alliance with Mr Trump portend increased uncertainty and instability in the kingdom and in West Asia in general. Both leaders are disruptive forces in the international arena, both rejoice in their “strongman” persona, and both seek quick solutions to complex issues through hard military force; neither of them has much time for reflection, diplomacy and accommodation of diverse interests. They are a lethal combination in West Asia.

Prince Mohammed’s first act as crown prince was the framing of 13 conditions that Qatar must accept and implement before the embargoes are removed. They require total renunciation by Qatar of all its cherished positions and institutions that have imparted to it a unique status in the region, and acceptance of the “monitoring” of its conduct by international agencies over a 10-year period.

This list of demands provides no space for negotiation or compromise, and affirms the brinkmanship and adventurism that have characterised the prince’s approach to regional crises, so that West Asia is now reeling from sectarian and jihadi confrontations, a fragmented GCC, murder and mayhem in Syria and Yemen, and political and military standoff between the two Islamic giants who confront each other across the Gulf waters.

There are legitimate concerns that the Trump-Mohammed duo could lead the region into an all-out war.