Panneerselvam and Palaniswami, will have to face an election that could be on the scale of a general election to get the top post 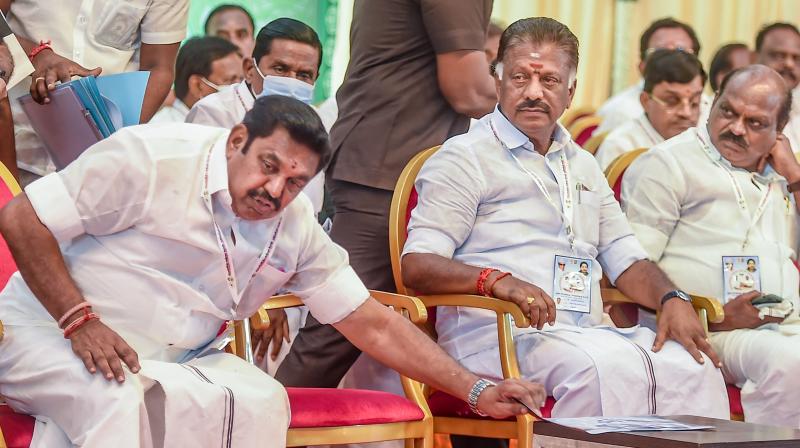 Two head honchos of the AIADMK, Edappadi K. Palaniswami and O. Panneerselvam, have landed the party that should be celebrating its golden jubilee in October in an inextricable situation. (Photo: PTI)

By tying themselves up in knots, both political and legal, the two head honchos of the AIADMK, Edappadi K. Palaniswami and O. Panneerselvam, have landed the party that should be celebrating its golden jubilee in October in an inextricable situation. With the possibility of the legal tangles getting complicated and prolonged with a definite answer to the questions of the two leaders eluding them for a longer time, the party faces the threat of disgruntled cadre, looking out for greener pastures, being spirited away by the BJP, hovering over the state’s political arena since the passing away of J. Jayalalithaa in 2016.

Though Mr Palaniswami had managed to win over an overwhelming majority of his party’s general council members, he has been unable to have a walkover in becoming the general secretary of the party because of the roadblock laid by the founder M.G. Ramachandran, popularly known as MGR. As per the AIADMK constitution, meticulously drafted under the instructions of MGR, the general secretary could be elected only by the primary members, whose numbers, as per the claim of the party leaders, now stand at a whopping 1.5 crores.

The contenders for the top job, Mr Panneerselvam and Mr Palaniswami, will have to face an election that could be on the scale of a general election to get the post. In the past five decades, since the party was under the spell of indomitable leaders like MGR and Jayalalithaa that there had been no need for an election of that sort and hence no one knows how it could be organised. Of course, even now, we are no way close to witnessing a party election of such magnitude since the fight between the two contenders lingers before judicial officers and not the party cadre.

A purely political squabble, or at worst a case of one-upmanship in a party, had been escalated to the Supreme Court. Even if the Supreme Court had sent it back to the high court once, there is every chance of it going back there as Mr Palaniswami, who suffered a setback due to the last verdict given by a single judge of the Madras high court, is appealing against it before a division bench. In the event of Mr Palaniswami emerging triumphant, the never-say-die Mr Panneerselvam will once again knock at the doors of the Supreme Court.

To put it otherwise, the legal battle is likely to go on and on as Mr Palaniswami, who has the majority of leaders, district secretaries and general council members with him, is firm on not opening the doors for talks despite the call from rivals for unity among all members of the AIADMK of yore. There is no possibility for a rapprochement as Mr Palaniswami believes that he can become the single leader while Mr Panneerselvam is not willing to let himself be consigned to history as a former head honcho. What’s tragic is that they are not bothered or concerned about tying up the party in a Gordian Knot.