The train’s manufacturing cost is 40 per cent less than if imported from Europe. 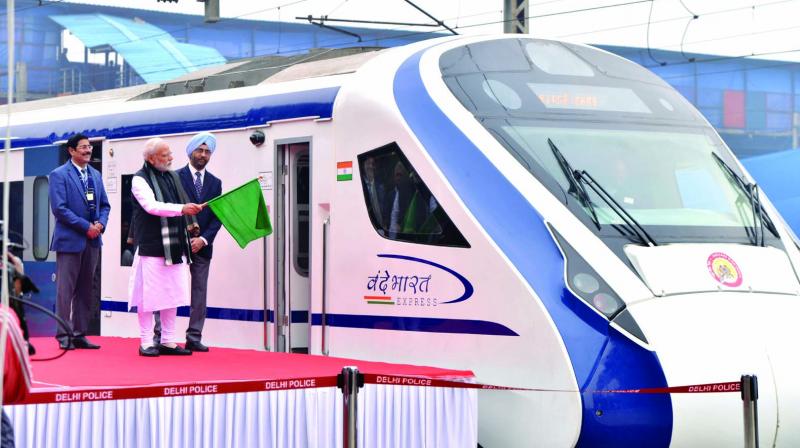 The Vande Bharat Express’ inaugural New Delhi-Varanasi return journey holds many lessons. One, the semi-high speed electric multiple unit is ultra-modern and promises comfortable journeys. Two, its indigenous production at ICF Chennai is a matter of pride, though its seats, braking systems, doors and transformers are imported. The train’s manufacturing cost is 40 per cent less than if imported from Europe. What the mystery breakdown on the return leg, with its speed down to 10 kmph, shows is that engineering is a continuous learning process. The breakdown was serious enough to threaten the first commercial run on Sunday. In the train’s short but thrilling history, making it almost a bullet train due to the aerodynamic shaping of two end coaches with the drivers’ cabins, there are so many issues to think about and introspect over “Make in India”.

The highlight is that the train had a safe run at a top speed of 130 kmph. Given the state of tracks, India is perhaps better off aiming at reasonable and safe rather than bullet train speeds, that needs huge infrastructure spending even to connect two cities. Glitches apart, it makes sense to build many more Train 18s for India’s inter-city travel than one ultra-ambitious bullet train linking Mumbai and Ahmedabad. This should be done without any excessive celebration as we saw in the promo video where the train’s speed was tripled to show off India’s capabilities and ended up as a minister’s ego trip that was left badly exposed. It’s also a reflection of the nation’s fractious state that a stone was thrown at the prestigious train while on its speed trials. We have a long way to go, but we can get there with our engineering skills and effective cost management.