The PM said that through much of the period when Covid-19 struck, the government gave rations free to 80 crore people 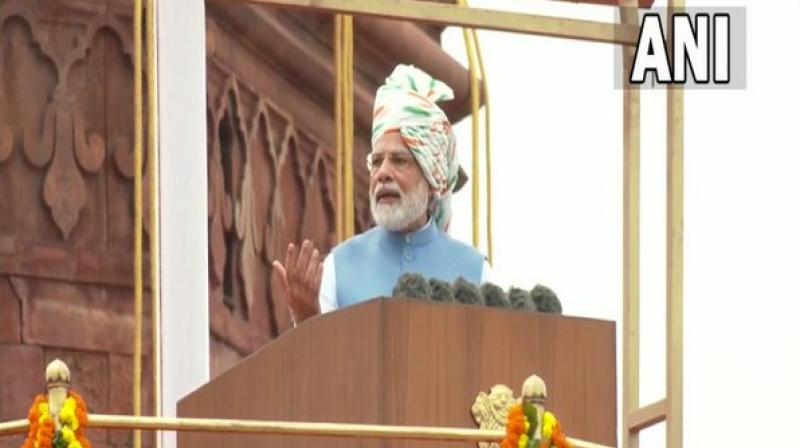 There was also much politics in the PM’s speech in the garb of history. Gandhi was mentioned as a mere freedom fighter. But Nehru, Vallabhbhai Patel, Rajendra Prasad, Jayaprakash Narayan and Ram Manohar Lohia did not make the cut. — ANI

There have been exceptions but the Prime Minister’s customary Independence Day speech from the Red Fort can be a tame affair. PMs enumerate high points of the year gone by, announce new programmes, and distribute thanks all around, especially to farmers and the armed forces. The occasion is tailor-made for dressed-up official or party propaganda and occasionally soaring rhetoric. The country is the stage. Politics is in-built.

As the completion of 75 years of Independence is a landmark, and enthusiasm for it was being officially generated in heavy-duty fashion with the “Har Ghar Tiranga” programme, around which some government or ruling party functionaries even wove in implied threats in their enthusiasm to please the higher-ups, there was a sense of expectation from Prime Minister Narendra Modi’s speech. He did not disappoint when it came to appearances, but questions on substance are likely to arise.

The country is a quarter century from attaining one hundred years since Independence. The present PM calls it “amrit kaal”, or the time when nectar can be harvested (after years of work), probably using the “amrit-manthan” (the churning of nectar by the gods) story of Hindu mythology. At the end of the next 25 years, India should be a “developed country”. This is Mr Modi’s big focus and commitment and is one of the five “pran” or pledges he made in the name of the country on the 75th anniversary of Independence.

This does look like a very big ask indeed. In US dollar terms, India’s per capita GDP is 1,900 dollars (Bangladesh being higher!) while Italy, probably the lowest on the scale of “developed” countries, is at nearly $32,000. Is it conceivable that we will catch up with the “developed” world in just 25 years? Does this not sound too optimistic? In 2017, the present government had spoken of doubling farmers’ incomes by 2022 and also ensuring housing for every household by the end of the present year. Such are the outcomes in these areas that the government does not refer to these anymore.

The PM has said that through much of the period of the most devastation when Covid-19 struck, the government gave rations free to 80 crore people, approximately 61 per cent of the population. This would mean that approximately that many people need serious help for basic survival in India. From this to becoming a “developed” country in just 25 years from now suggests a simplistic imagination. The notion may be comparable with Mao’s scheme of the “Great Leap” which led to much suffering. But China’s leader did give a scheme.

Mr Modi offered no blueprint — or worked out scheme — for his extraordinary idea. He did not suggest even a loose road map to guide the “aspirational” society of his conception. It is hard not to recall the promise of giving Rs 15 lakh to every household since there was thought to be billions stashed away as black money, a thought later called “chunavi jumla” (election-time throwaway sentence) by none other than Amit Shah, now the Union home minister.

There was also much politics in the PM’s speech in the garb of history. Gandhi was mentioned as a mere freedom fighter. But Nehru, Vallabhbhai Patel, Rajendra Prasad, Jayaprakash Narayan and Ram Manohar Lohia did not make the cut. Interestingly, Savarkar, a man who wrote letters of apology to the British to get out of prison, did. It did not matter that he was tried in the Gandhi murder case but let off on technical grounds.

“Nehru ji” did figure among those who helped build India after Independence alongside Dr Rajendra Prasad, Syama Prasad Mookerjee, Nanaji Deshmukh, JP, Lohia and Vinoba Bhave. History needs better teachers if it is not to be repeated as a farce in the second telling.