There was no dearth of suggestive statements about the demography of Malappuram, the only Muslim-majority district in the state 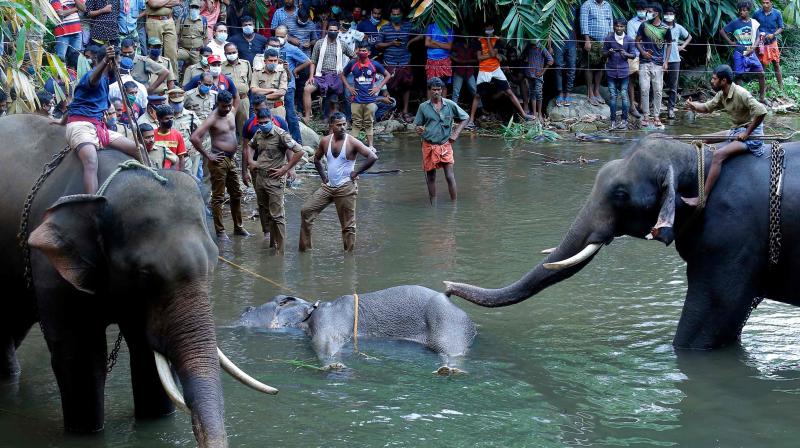 In this file photo taken on May 27, 2020 policemen and onlookers stand near a dead pregnant wild elephant retrieved after it strayed into a village and ate an explosive-filled fruit, on the banks of the Velliyar River in Palakkad district of Kerala state. AFP Photo

The tragic event of a pregnant wild elephant in Palakkad district in Kerala falling prey to continuing man-animal conflicts in the country, especially in villages abutting forest areas, is now being used by vested interests as a pivot to launch a hate campaign against the state in general, and Malappuram district in particular. Nobody has a case that the perpetrators of this heinous crime be allowed to go scot free; the police booked three people and arrested one barely 48 hours after the event being brought to its notice.

But while the police was on it, hatemongers wasted no time pouncing on Malappuram district after a news channel wrongly located the gruesome incident in it. Right-wing apparatchiks, led by former Union minister Maneka Gandhi, unleashed a barrage of wrong statistics, nasty innuendoes and plain nonsense. As per the BJP leader, 600 elephants are being killed in Kerala every year but Rajya Sabha records say 510 elephants died of unnatural reasons in India between 2014 and 2019 and only 42 belonged to Kerala.

Ms Gandhi said someone fed a pineapple with a bomb inside it to the animal while a post-mortem report found no traces of the fruit.  She named senior officials of the forest department and the minister in charge and called them “useless”, offering no reason whatsoever. And the Twitteratti launched a relentless campaign painting the district as the land of the cruel.

There was no dearth of suggestive statements about the demography of Malappuram, the only Muslim-majority district in the state. Many celebrities, who had failed to hear the cries of the guest workers who died walking home in the hot sun, boarded the bandwagon.

It is a fact that “god’s own country” has not been jumbo-friendly. The state has the largest number of domesticated elephants, the term being an oxymoron because taming this wild animal is impossible except through cruel and painful methods. Elephants by nature cannot stand heat and noise but are paraded during religious festivals in hot summer.

Last year, Thrissur erupted in anger when the district magistrate denied permission to bring in a one-eyed elephant, which has a history of killing six people, for a festival. That he was forced to relent, though with conditions, betrays the true nature of the so-called “elephant lovers”.

Man-animal conflict is a phenomenon seen the world over as humans expand their area of work to meet their quest for necessities, comforts and luxuries. But there has to be a balance between that and the urgent need for environmental protection. It is for humanity to find out ways to eliminate such incidents.