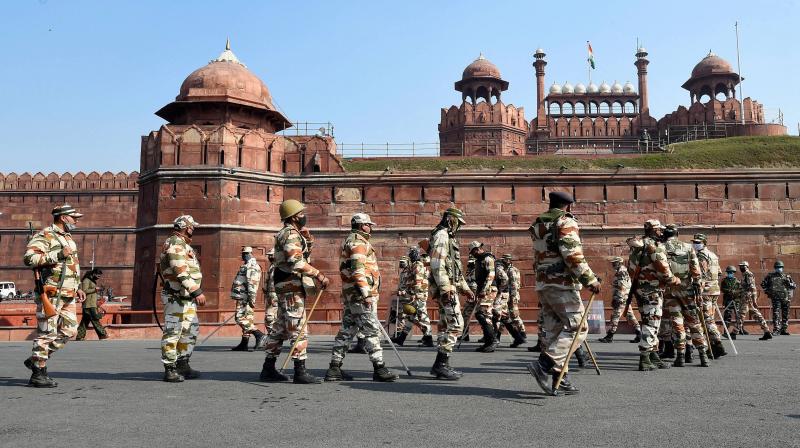 Security tightened at Red Fort, a day after it was stormed by protesting farmers during their tractor march, in New Delhi, Wednesday, January 27, 2021. (PTI /Kamal Singh)

The Republic Day “tractor parade” mayhem at two points in Delhi on Tuesday is an episode in the two-month-long standoff between the Narendra Modi government and the Punjab farmers that is neither too big nor too serious. There are always moments in long-drawn agitations when unruly elements indulge in unseemly acts. An agitator placing some flags of a Sikh gurdwara and of the farmers’ union was indulging in a mindless prank, or the man driving the tractor into a police cordon was a man who had no sense. But this foolish episode has been blown out proportion by young television news channel reporters and anchors. Their innocence and ignorance were both amusing and touching to watch.

The significance of the fracas on Tuesday has more to do with the position of the farmers, who could proudly claim till then that theirs was a peaceful protest and they could sit on a high moral perch. Their inflexible stance carried a quixotic nobility about it. All that vanished by the afternoon of Republic Day as some of the agitation’s senior leaders even apologised as they blamed the people who had turned into hooligans and they tried to say that the troublemakers were not from their fold. Of course, that defence is weak and unconvincing. And it will be hard for them to live down the avoidable clash with the police. But the farmers and their leaders have lost strategic ground as well. They cannot any longer speak with the courage and confidence they had before Tuesday. They may not be to blame for the trouble and violence that erupted on the streets, but they cannot escape the moral responsibility.

The more curious part in this showdown is that of the Delhi police and that of the Union home ministry, with home minister Amit Shah at the helm. The unintended consequences of Tuesday’s clash with the agitators allows the government to corner the farmers and their leaders, and it also gives them the room to prosecute the suspected “Maoists” and “Khalistanis” who ran amok on the streets. There is an uncanny resemblance to what the police did in February 2020 during the communal riots in northeast Delhi. The Delhi police literally adopted the guerrilla tactic of allowing the protesters to unleash violence, and they used the violence to turn the tables on the agitators. In last year’s riots, the anti-Citizenship Amendment Act stir was used to shut down the months-long peaceful protest at Shaheen Bagh. It remains to be seen whether Mr Shah will try to use Tuesday’s violence to push the farmers back now that they are on the backfoot. But that is unlikely to happen as the principal leaders of Punjab’s farmers aren’t going to allow themselves to be distracted by Tuesday’s developments; their eyes are focused on the repeal of the farm laws. Mr Shah may not have an easy time though he has ordered the deployment of paramiliytary forces in Delhi, Haryana and Punjab. It is, however, clear that Mr Shah will have more of a say in dealing with the agitation now.

Behind this political grandstanding by the government following Tuesday’s events, there is the troubling fact that the Delhi police has lost the ability to tackle agitations and protests. It has been argued by well-meaning neutral observers, including those who have a sneaking sympathy for the Narendra Modi government and a corresponding antipathy for Punjab’s “pampered farmers”, that the Delhi police could not have deployed sufficient forces at all points of the tractor parade’s route due to the constraints of numbers. That the police officers could not but trust the farmer unions leaders, and the police was caught off-guard by the overwhelming numbers of angry protesters with their speeding tractors, swords, rods, etc. This lament of betrayal by police officials is as naïve as that of the farm leaders’ blaming so-called saboteurs.

It is quite evident that the Delhi police has not been exposed to agitations like before, and that its personnel haven’t been trained sufficiently to tackle such situations. The police officers as well as Union home ministry officials should have realised that there was a need for a larger force to monitor the movement of tractors and the protesting farmers. The decision to deploy paramilitary units on Tuesday should have been taken on Monday the moment it was decided to allow the tractor parade. These miscalculations are indeed part of the fallibility of those in command. It is however to be seen whether they will learn any lessons for the future.

The confrontation between the agitating farmers and the government will turn more hostile than before, and this may not help to find a face-saving exit for either of the two sides. Prime Minister Narendra Modi has kept himself aloof from the issue apart from giving general, vague rhetorical responses. The people on the ground are agriculture minister Narendra Singh Tomar, railway and commerce minister Piyush Goyal and of course home minister Amit Shah. Mr Shah was earlier active in dealing with the agitation but then moved back and let Mr Tomar hold the fort. It was clear Mr Shah was not the man to take conciliatory positions of any kind, while Mr Tomar played the role of conciliator quite deftly.

After Tuesday’s minor explosion, it is likely that Mr Shah will again be in the forefront and will show the mailed fist of the government. This may not help to end the agitation and the deadlock. The force deployment becomes inevitable all around. The government might relish the moment as it would create the momentary satisfaction that is in control of the situation. The Prime Minister, with his unassailable parliamentary majority in the last seven years, has not shown any signs of flexibility on any issue. The deployment of forces will maintain “law and order”, but the decisions that gave rise to the agitation still need to be reviewed. Somewhere down the line, the Modi government is losing its political capital. But ruling parties, cocooned behind the turrets and moats of power, do not care much for the changes in the sentiments of the people. There is clear trouble ahead of the political kind, even as the Prime Minister and his colleagues exhibit self-righteousness.