As the weeks have gone by, the Prime Minister Boris Johnson looks less and less in charge 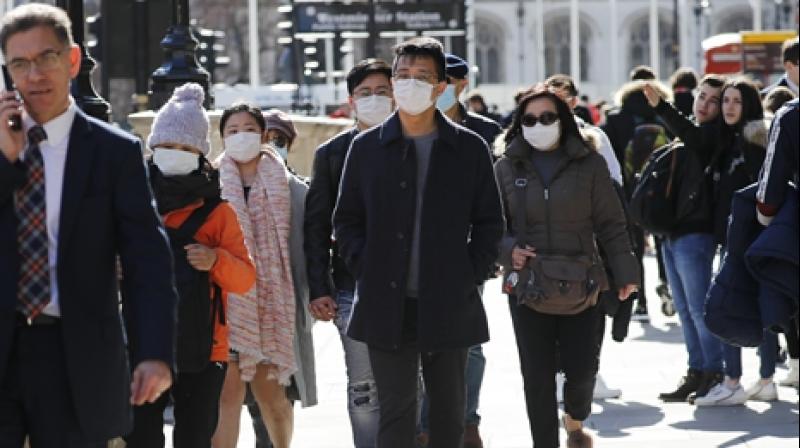 People wear protective face masks as they walk down Whitehall in the Spring sunshine in central London. (AFP)

Summer is here. We had the hottest day on Wednesday with temperature at 28 degrees Celsius. That is what people in the UK consider warm enough to rush to the beach, take off their clothes, and plunge into the water.

Despite the caution about corona, government warnings have been half hearted and people, especially the young and those who think they are young, are out and about.

This is also the weekend when the Whitsun holiday week starts and from last Friday to next Monday it is a holiday. But since we have all had a peculiar time working from home or not at all, Whitsun feels like an invitation to break out of the routine. So there are long queues of cars outside the few MacDonalds, which are open for deliveries to be collected as you drive by.

Any and every urban open space and beach is crowded with bodies, which are barely obeying the two-metre rule.

It seems like the Covid crisis has ended but not quite. It is slowing down, week after week. Fewer hospital admissions, fewer deaths but there is a row about deaths in care homes and people who have died because of collateral damage. A public inquiry will undoubtedly be conducted to find out how things went so horribly wrong.

That will take three years to report by which time most people except the professional politicians will have lost interest. We had an inquiry about the Iraq war, which no one remembers now.

As the weeks have gone by, the Prime Minister Boris Johnson looks less and less in charge. Photographs published show him as thin and greyish. This is not the ruddy complexioned, boisterous Boris we have seen over the years. Those who have observed him say that he is used to being triumphalistic, but not decisive in a fraught situation.

He cannot take any problem as requiring serious attention. He has never known any hot spots he could not talk his way out. But now the House of Commons is in virtual session with very few MPs allowed in the chamber. In this silent, somewhat eerie atmosphere, Boris Johnson has had to face Keir Starmer the new Labour leader at Prime Minister’s Questions on Wednesdays at 12.

Normally the chamber is crowded and there is a lot of heckling and shouting in a raucous display of partisanship (great TV but not very informative). Boris loves the atmosphere and thrives on it. But now with silence all around and a barrister with forensic skills as his opposite number, poor Boris is floundering around hopelessly.

A few people are getting back to work but the high street shops are still shut. No pubs. A few brave restaurants have redesigned their seating with each table surrounded by shower curtains to maintain social distance. Theatres are shut but you can stream their old classic plays on to your TV  indeed everything you ever wanted to see can be streamed. Even the Chelsea Flower Show, a prime attraction of the early summer, is available to be visited virtually.

You can wander through the flowers without all the crowds. The British Museum is online. The reality is that anything with a crowd is now part of the “old world”, Before Corona (BC).

And we shall have to miss the crowd from India, which was a regular part of our summer with Wimbledon absent and no Test match. Selfridges will be empty of its usuals.

June and July was when we used to plan all our summer parties and Indian friends would be here to enjoy the glorious weather. Indeed this was again BC now all the Pimms will have to be drunk while self-isolating in the back garden, with a good book…

Home secretary Priti Patel has just announced that if you come to UK in June you have to spend 14 days in quarantine. (Hmm, note to self, stock up lots of Pimms!) She is also revising immigration rules though that may help Indians as they are high value immigrants.

Yet the most remarkable story of this Covid crisis has been the amazing upsurge of voluntary activity to fight the virus. Neighbourhood groups have sprung up to look after anyone who needs help during lockdown. National Health Service workers have become heroes and charities are springing up collecting money and PPE for them.

The most heart warming story has been about Tom Moore, a retired soldier who, before his hundredth birthday, decided to walk a hundred times in his front garden. He thought that was his gesture for the NHS and may raise a few bob.

Thanks to social media his story caught fire and he raised £33 million. Now he has been knighted as a special concession when all other honours lists have been postponed.

It is not clear whether the Queen will herself knight him or whether Prince Charles will volunteer as his mother is on lockdown in Windsor. In either case they will have to use a long sword to maintain social distance!