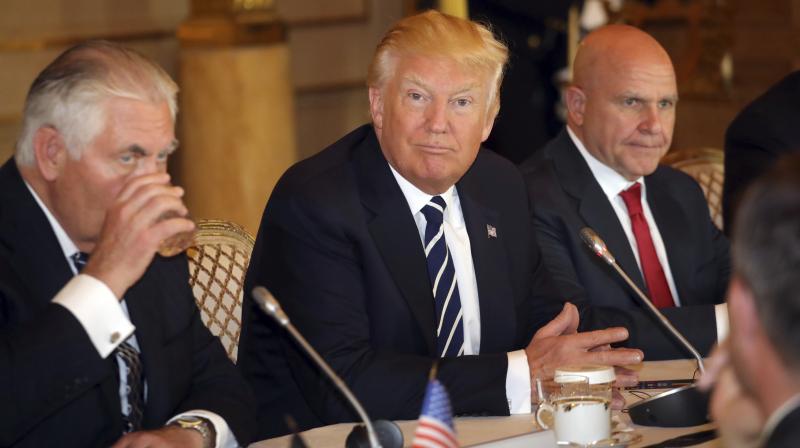 US President Donald Trump, center, sits with US Secretary of State Rex Tillerson, left, and National Security Adviser H.R. McMaster, prior to a meeting with Belgium's King Philippe and his wife Queen Mathilde at the Royal Palace in Brussels. (Photo: AP)

Donald Trump’s West Asia tour was replete with symbolism: he flew directly from Riyadh to Tel Aviv, the first such flight between the two estranged countries, reflecting the President’s vision of a united Arab-Israeli coalition against Iran. Islam was now described as “one of the world’s great faiths”, a departure from his campaign rhetoric when he had firmly asserted that “Islam hates us”. He then worshipped at Jerusalem’s Western Wall and visited the Christian holy sites — Bethlehem and the Church of the Holy Sepulchre.

But beyond the symbolism, there was a shaping of new strategic alignments in West Asia and the re-emergence of an active American role in the region.

On the campaign trail, Mr Trump had pandered to the ignorance and prejudice of his core constituency by repeatedly maligning Islam, the faith, and the Muslim people in general. The President’s position changed partly due to the influence of three of his senior advisers — secretary of state Rex W. Tillerson, national security adviser H.R. McMaster and defence secretary James Mattis. Mr Tillerson has been an oilman for several decades and had close ties with Saudi Arabia as ExxonMobil chairman.

The other two, as senior military officers in the Gulf, have been close to the kingdom and its princes for a couple of decades, while retaining a deep-seated animosity for Iran. Gen. McMaster has a further concern: he sees Iran as one of the “hostile revisionist powers”, in the company of Russia, China and North Korea, all countries which are seen to be challenging the US-led world order.

But there has been another influence on Mr Trump: the lure of defence and commercial deals. This was conveyed to the President by the deputy crown prince and defence minister, Prince Mohammed bin Salman, during their meeting in March this year. The White House was exultant, cheerfully saying that Saudi investments of about $200 billion in US infrastructure would create a million jobs directly and several million others indirectly. This prepared the ground for the President’s Saudi visit, when these deals would be ceremonially announced and a new strategic partnership put in place.

The President’s Islamophobia has now become Iranophobia. This mindset and vision has defined Mr Trump’s every remark and action during his foray in West Asia. On the bilateral plane, the US and the kingdom have signed a joint strategic vision declaration based on which they will jointly combat violent extremism and the financing of terror, build up Saudi defence capabilities, and shape a new “defence architecture for the region”.

In his address to the Muslim leaders assembled in Riyadh, Mr Trump asked them to confront “the crisis of Islamic extremism”. His references to Iran were specially hostile: he called on the Muslim world to help isolate Iran. Again, just days after the Iranians had re-elected a moderate President, Hassan Rouhani, he also seemed to call for regime change when he asked his audience to “pray for the day when the Iranian people have the just and righteous government they so richly deserve”.

In Israel, he affirmed that the US would not allow Iran to develop nuclear weapons and would preserve Israel’s security in the region. He said: “Iran’s leaders routinely call for Israel’s destruction — not with Donald J. Trump. Believe me.”

For the kingdom and its Gulf Cooperation Council allies, Mr Trump’s election slogan, “America is back”, has a literal and concrete meaning after what they recall as the nightmare era of the Barack Obama presidency. Mr Obama had not only failed to back Saudi Arabia in its regime change project in Syria and its war against the Houthis in Yemen, where both its aims were thwarted by Iran, the former President had also worked assiduously for the nuclear deal which freed Iran to challenge the GCC across the Arab world. Mr Trump seems to have harked back to the period of George W. Bush and his predecessors, when the US was the firm ally of the Arab potentates and he unshakeable enemy of Iran.

Most Arab commentators are not so enthusiastic. Even pro-GCC writers noted that the President, while condemning Iran, presented no specific action to confront Iran and its perceived hegemonic designs in the region. Specifically, he not repudiate the nuclear deal with Iran, nor did he rescind the visa restrictions on Muslims’ entry into the US.

They also noted his weak position at home and were not sure how he could mobilise domestic support to back the kingdom and its allies militarily in Syria and Yemen. Also, with the prevailing low oil prices, they doubted the ability of the Gulf monarchies to pay for the extravagant defence and other deals they have used to win the President’s backing.

The most concrete takeaway from the visit is that Mr Trump, with his condemnation of Iran, Hamas and Hezbollah, has criminalised the resistance to Israel, sidelined the Palestinian cause, and replaced Israel with Iran as the principal enemy of the Arabs in the region, so the Arab-Israeli conflict will now be replaced by an intra-Muslim sectarian contention.

But there’s a serious flaw in the President’s understanding of the sources of extremism in the Muslim world. Mr Trump narrowly focused on radical ideology, but failed to address the origins of this malaise: it’s not religious belief, but the authoritarian political order in West Asia that is seen by its people as non-transparent, non-accountable, corrupt, and non-accommodative of citizens’ aspirations, particularly the youth. The youth find an idealism, empowerment and sense of historic accomplishment in radical groups.

Mr Trump didn’t speak of the need for political reform; he referred to his “principled realism”, in terms of which he supported the political status quo. Nor did he pluck up the courage to insist on Israel halting its settlements and reviving the peace process. He has, instead, structured a powerful, sect-based alliance against Iran and its allies. West Asia after the President’s visit is more dangerous than it has ever been in recent times.