Assam: The vortex of natives vs aliens 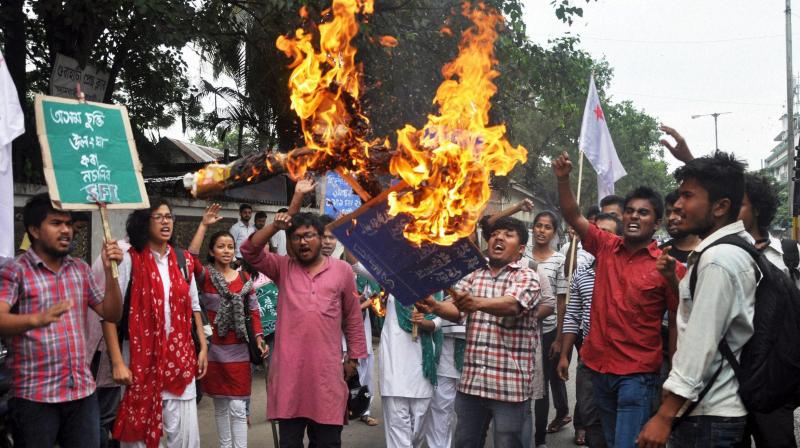 Activists of the Students Federation of India (SFI) burning the effigy of Education and Finance Minister Himanta Biswa Sarma at a protest against his comments on giving citizenship to Bangladeshi Hindus in Assam in Guwahati. (Photo: PTI)

Assam, the theatre of independent India’s biggest mass uprising against illegal foreign migrants (read Bangladeshis), has once again been sucked into the vortex of the natives versus aliens discourse. This follows the Narendra Modi government’s move to grant citizenship to minority Hindus, Sikhs, Jains, Parsis, Christians and Buddhists from Pakistan, Bangladesh or Afghanistan who have been residents in India for six years. As far as Assam is concerned, the worry among various sections is the possibility of an unspecified number of Hindus from Bangladesh gaining citizenship, a move that would amount to violation of the 1971 cut-off date for detection and expulsion of illegal migrants which forms part of the provisions of the historic 1985 Assam Accord that brought the curtain down on the six-year-old anti-foreigner agitation in the 1980s.

The BJP-led government’s compulsions can be understood with senior leaders like Assam’s finance, health and education minister Himanta Biswa Sarma saying Hindu minorities in Bangladesh, Pakistan and elsewhere have only India to head for to seek refuge in times of crisis whereas Muslims have several places to go. “If Hindus flee from countries where they fear religious persecution, India has to protect them and give them shelter. Where will these Hindus, who are minorities in other countries, go if India does not accept them? Muslims and Christians have got several places to go to,” Mr Sarma was quoted as saying in September. Whether countries like Saudi Arabia, Iran and others would open their borders to let Muslim refugees in during moments of crisis is another matter!

Now, groups like the All Assam Students’ Union (AASU); Krishak Mukti Sangram Samiti (KMSS), a peasants group; the Asam Sahitya Sabha, the state’s apex socio-literary body, and others have questioned whether citizenship can be granted on the basis of religion and whether the move would not violate the provisions of the Assam Accord and make the state a dumping ground for illegal migrants. In fact, the BJP-led government at the Centre and in Assam appears to have embarked on a serious exercise to take a hard look at the issue, perhaps after the response from various quarters on the proposal. In Assam’s context, the issue has become more complex because Clause 6 of the Assam Accord promises special safeguards for the “Assamese people”. Nothing has happened so far although 31 years have passed by. An acceptable definition as to who would come under the bracket “Assamese people” has also not been found yet.

The two issues — the issue of special safeguards to “Assamese people” and the move to grant citizenship to Hindu Bangladeshis — are actually linked. One argument says it is fine to facilitate the stay of Hindus in India who had to flee countries like Bangladesh due to alleged religious persecution. But there are others who feel granting these people citizenship would have an impact on the linguistic sphere as the number of Bengali-speaking population is bound to rise. What is not known, however, is the extent of the increase because one really doesn’t know the number of such people who could be already in Assam. Many are also asking whether such people can be dispersed across the country, and, if not, can they be confined to the Bengali-speaking Barak Valley districts. It may be difficult to restrict people in a particular area, and, therefore, the issue needs to be examined from all angles.

Recently, senior BJP leader Ram Madhav, Assam chief minister Sarbananda Sonowal and Mr Sarma held an interaction with a select group of opinion-makers from Assam on the subject. It was a good attempt at going deep into the matter that is indeed sensitive. Among the many points of view put across by those present was the question whether at least 80 of Assam’s 126 Assembly seats could be reserved for the indigenous people of the state. Well, it is a good idea and can fulfil the expectation generated 30 years ago with the provision finding a place in Clause 6 of the Assam Accord. But, how to go about it? After all, any move to reserve seats on a community basis must be able to stand legal scrutiny.

The exact wording of the much-talked-about Clause 6 of the Assam Accord are as follows: “Constitutional, legislative and administrative safeguards, as many be appropriate, shall be provided to protect, preserve and promote the cultural, social, linguistic identity and heritage of the Assamese people.” Now, the obvious question is: who are the “Assamese people”? Had the drafters of the accord used the term indigenous people, there would not have been so much of a problem. Now, when ethnic groups have asserted their aspirations to maintain their distinct identity, like the Bodos, Dimasas, Karbis and so on, would they be willing to come under the bracket of “Assamese people”? One would wait and see how the BJP leadership negotiates through this issue and reach a solution.

Again, there seems to be a move in certain quarters to try and have 1951 as the cut-off date for detection and expulsion of illegal migrants, and they have moved the courts in this regard. This will also have a bearing on the Assam Accord because it would amount to pushing back the cut-off date by 20 years. If this happens, one would expect more people to fall under the bracket of illegal migrants. But, what could be the fallout of any such move (if it happens) on the process of updating of the National Register of Citizens (NRC)? Already, certain quarters have come out with the discovery that during the chief ministership of Gopinath Bordoloi, around 200,000 illegal migrants had been pushed back to the then East Pakistan. These people were said to have returned after a few years. The same quarters now say that people from this category had submitted their old documents during the NRC update process and that they should now be made to submit proof of continuous residence in Assam.

Amid the confusion came a written reply by Union minister of state for home Kiren Rijiju in the Rajya Sabha on November 16 that there are two crore illegal Bangladeshi migrants in India. The basis of this figure is not known but it amounts to a 67 per cent increase over the 1.2 crore estimate given out by the UPA government in 2004 but withdrawn rather quickly. Whether the “Assamese people” would get their special safeguards is difficult to predict, but the politics of citizenship sure is going to gather steam in the days ahead.