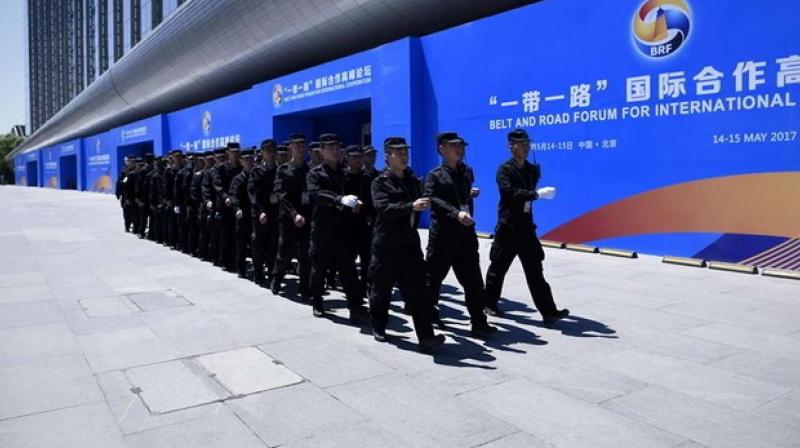 A group of security guards walk past a billboard for the Belt and Road Forum for International Cooperation. (AFP)

What would the new Cold War look like as China attempts to achieve its misconceived tryst with the destiny of becoming the world’s pre-eminent power by 2049, completing one hundred years as a modern communist state albeit with capitalist characters?

Where then would China’s push points lie? The first and obvious one — is the Western Pacific. China has been now for decades trying to break out of the first and the second island chains as well as surmount the Malacca dilemma effectively.

What are these island chains and do they serve any strategic purpose today in containing or constraining China? The first one embraces Kuril Islands, main Japanese archipelago, Okinawa, northern part of the Philippine archipelagos, Malay Peninsula and Taiwan. The second one comprises the islands of Japan stretching to Guam and the islands of Micronesia. China has so far succeeded in establishing a robust presence through its grey zone actions in the first island chain only. In the Spratly and Paracel Island chain in the South China Sea, China is growing land to augment its entitlement to the waters of the region. It is landfilling submerged reefs building artificial islands that are being fashioned into outlier military bases.

Herein lies the rub. These two island chains are strategically significant for the US and its hub and spoke security relationships from Japan all the way down to Australia. As General Douglas MacArthur, in his farewell address to the US Congress as far back as 1951, explained, “All this was changed by our Pacific victory, our strategic frontier then shifted to embrace the entire Pacific Ocean which became a vast moat to protect us as long as we hold it. Indeed, it acts as a protective shield for all of the Americas and all free lands of the Pacific Ocean area. We control it to the shores of Asia by a chain of islands extending in an arc from the Aleutians to the Mariannas held by us and our free allies. From this island chain we can dominate with sea and air power every Asiatic port from Vladivostok to Singapore and prevent any hostile movement into the Pacific...” Maybe not so much militarily but geo-politically this thesis is as relevant today as it was in 1951. For the Chinese, therefore, it is equally important to break through this perimeter if they want to become a serious blue water power.

It would be instructive to note that China’s shipping imperatives traverse the Taiwan Straits, pass through the South China Sea, and into the Indian Ocean via the Malacca Straits. West of the Indian subcontinent, it splits in two. One track skirts the northern tier of the Arabian Sea and transits through the Hormuz Strait into the Persian Gulf. The other lane continues on to the Horn of Africa and cones through the Bab al Mandeb Strait into the Red Sea. From there, it exits through the Suez Canal into the Mediterranean. These crucial sea lanes of communication and Commerce (SLOCs) are China’s nemesis as 80 per cent of China’s oil imports and crucial minerals flow from Africa and the Middle East, and to the major export markets of Europe along these waterways.

The North Arabian Sea is therefore a critical area for China. To protect its interests and project power Gwadar in southwest Pakistan seems the obvious answer to its problem. East of Hormuz it is already seen as China’s sentinel in the Indian Ocean. Though economically unviable it enables direct transport linkages between China and the Indian Ocean thereby helping it overcome the choke points of the Straits of Malacca.

However, the moment China converts Gwadar into a full-fledged military base it would come in conflict with the entrenched powers in the region namely Iran, GCC countries and most importantly the US whose Fifth Fleet is headquartered in Bahrain and it maintains its biggest concentration of military personnel in the Middle East at the Al Udeid Air Base in Qatar. China will also have to contend with a new dynamic in the region the new-found relationship between the United Arab Emirates (UAE), Bahrain and Israel. India that sits on the other side of the Arabian Sea would be a natural antagonist of any Chinese presence in these waters.

The next theatre of the Cold War would be Africa where the Chinese have invested resources much before the formal commencement of the Belt and Road Initiative. China’s first internationally acknowledged military facility was established in August 2017 at Djibouti in the Horn of Africa. The Chinese People’s Liberation Army Support Base is operated by the Chinese People’s Liberation Army Navy (PLAN). This hub will facilitate the movement of the Chinese Navy across the entire Indian Ocean. However there are traditional powers in that area namely Saudi Arabia, Egypt, Libya, Algeria, to name but a few. They are not going to be comfortable with an alien military presence in their lands. Why would they want China to replace the United States as the outside power balancer in the region? It, therefore, will create multiple friction points for China, were it to flex its muscles.

The most portentous challenge lies in South Asia. China is already in a tense stalemate with India in Eastern Ladakh. Maldives has been targeted by China’s voraciousness. Maldives debt to China is estimated to be at least $1.5 billion that represents more than 30 per cent of its GDP. Under the Abdulla Yameen administration (2013-2018), massive BRI infrastructure loans were taken and contracts subsequently awarded to Chinese companies at inflated prices. Though things seem to look a tad more balanced after Ibrahim Mohamed Solih became President but the debts do remain on the Maldives national balance sheet. Similarly, the cumulative value of Chinese infrastructure investment to Sri Lanka amounts to $12.1 billion between 2006 and July 2019. Were the Chinese to push these two countries for military concessions and with the US showing an interest in both Maldives and Sri Lanka the Chinese may have to deal with both India and the US in South Asia. This though is not in India’s best interests as both these nations are considered within its eminent domain.