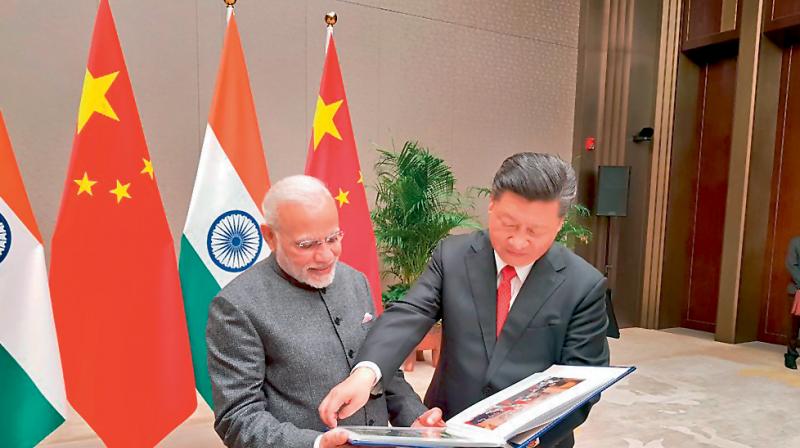 The diplomatic jostling has increased between India and China after the in-person Quad summit hosted by President Joe Biden at the White House in Washington in September. The gradual tightening of the Chinese tourniquet in South Asia all around India is an old factor. A series of events demonstrate this phenomenon.

First is the situation in Afghanistan after the US military withdrawal and the swift capture of Kabul by the Taliban, with the support of Pakistan. India finds itself progressively pushed into the role of a bystander, largely dependent on multilateral pressure to handle the new Taliban regime. China, on the other hand, is dealing directly with the new power wielders in Kabul.

The G-20 special meeting of leaders on Afghanistan on October 1, hosted by Italy, saw both Chinese President Xi Jinping and Russian President Vladimir Putin giving it a miss. Instead, they had sent lower-level participants. While the G-20 agreed that the humanitarian crisis in Afghanistan needed addressing, there was no agreement yet on whether or when to recognise the Taliban regime.

China also finds itself in a fix in dealing with the Taliban as its precondition that the Uyghur militants of the East Turkestan Islamic Movement (ETIM) be handed over is proving problematic. The suicide bombing at a mosque in Kunduz, which killed 50 people, was done by an Uyghur.

The Islamic State (Khorasan), or ISIS-K, in a statement, claimed responsibility for the bombing, which it claimed was because the Taliban was wrongly negotiating about the fate of Uyghurs with China. Separately, President Putin claimed ETIM has deployed 2,000 fighters in east Afghanistan. There are reports that 30 ETIM fighters had escaped from Afghan jails during the transition of power.

The Indian government’s concern is that the escalating terror attacks in Jammu and Kashmir are flowing from an emboldened Pakistan in the aftermath of the Taliban’s victory and a more destabilised western neighbourhood. But the BJP’s electoral needs, especially in Uttar Pradesh and Punjab, and national security concerns are rubbing against each other. The sudden and unilateral decision to increase the operational control of Border Security Force (BSF) in Punjab from 15 km on the India-Pakistan border to 50 km is one such example. The reason given is the need to control drug smuggling and weapons. It can be argued that when tonnes of heroin are coming undetected via the Adani ports, why would smugglers need to send smaller quantities by drones. Also, such blatant seizure of power from the local police is a serious dilution of the federalism principle.

Turning to Sino-Indian relations, it has been clear for some time, and especially since the last round of the corps commander-level talks, that China was resisting accepting the status quo ante on incursions across the Line of Actual Control in Ladakh.

The 13th round of talks was held on October 10. The stalemate became obvious when neither side attempted to hide their disappointment. Global Times, the English propaganda tool of the Chinese Communist Party, went a provocative step further arguing that India’s demands were unrealistic and “not in line with the real situation or its strength”.

It even alleged India was being “opportunistic”. The implication was that India was exploiting the China factor to draw closer to the United States. The talks had been preceded by an intrusion on August 30 in the middle sector at Barahoti by 100 PLA soldiers on horseback who proceeded to destroy some Indian installations. Then, on September 30, Indian soldiers confronted the intruding PLA soldiers near Yangtze and Tawang in Arunachal Pradesh.

The visit by India’s vice-president M. Venkaiah Naidu to Arunachal Pradesh a day before the corps commanders’ talks was perhaps done recognising that China was anyway hell-bent on adopting a recalcitrant stand on the border issue. The outcome was thus more confirmation of what India expected, rather than any surprise.

Against this background, the October 14 agreement between Bhutan and China on a three-step approach to solve their border issue came as an unpleasant surprise. The external affairs ministry of course maintained public indifference by simply noting it, while adding that it was part of a process ongoing since 1984. But internally there would be concern that any exchange of territory between Bhutan and China, as proposed in the past by China, may lead to greater Chinese entrenchment in the Chumbi Valley. Four years ago, in mid-2017, there was the India-Bhutan-China standoff in the Doklam plateau, which is located dangerously close to the Siliguri Corridor. In case of any Chinese military action in the eastern sector in Arunachal Pradesh, the corridor has to remain open to enable an appropriate Indian military response. China, contrariwise, would like to get close enough to be able to threaten the choke point.

These series of episodes across the Sino-Indian Line of Actual Control indicate that China is determined to tie India down on the South Asian subcontinent by applying pressure across the unsettled border as well as by weaning away the last reliable buffer, Bhutan. Nepal’s reliability in this regard is already suspect. This seems intended to distract India from its Quad commitments across the maritime domain in the Indo-Pacific region.

Simultaneously, President Xi has mellowed his rhetoric as seen during his address at the 110th-anniversary commemoration of the XinHai revolution.

Also, there appears to be an attempt underway to engage the United States before the planned Xi-Biden summit before the yearend. On October 6, US national security adviser Jake Sullivan met top Chinese diplomat Yang Jiechi in Zurich, and the Chinese foreign ministry dubbed the meeting as “constructive and conducive to enhancing mutual understanding”. It seems that China has realised that its across the board obduracy has created greater convergence between most of the states in its neighbourhood, which the US has been able to exploit. Is it then adopting a differentiated approach, which involves its engagement of the United States and a stiffening of its stand vis a vis select neighbours such as India? That would be a reversion to the historical Chinese strategy of playing one “barbarian” against another.

India has to thus remain vigilant when playing the new game of balancing between the old hegemon US and the rising power China. Alongside, the BJP has to stop playing its communally divisive electoral games at home. India’s external environment is now too destabilised by the rise of the Taliban in Afghanistan and an increase in China’s power grab to allow for such reckless electoral politics at home.